The head of Egypt’s military council has said that the country’s decades-old state of emergency will be lifted on Wednesday, the first anniversary of the uprising that brought down president Hosni Mubarak.

“I have taken a decision to end the state of emergency starting on the morning of January 25, 2012,” Field Marshal Hussein Tantawi said in a televised address on Tuesday, adding that it would still apply in dealing with cases of “thuggery”.

He did not elaborate what that term meant.

Al Jazeera’s Sherine Tadros, reporting from Cairo, said the phrase “acts of thuggery” is problematic as “no one exactly knows what that means and what is applies to”.

“Let’s make clear what this is not. This is not the complete suspension of emergency law. […] What Tantawi has done is very similar to what the former President Hosni Mubarak did, which is not abolish the emergency law altogether but in fact just narrow it’s remit.”

The controversial emergency law – which has been continuously in place since Islamists assassinated president Anwar Sadat in 1981 – was repeatedly extended under Mubarak’s rule.

Last year, the ruling Supreme Council of the Armed Forces (SCAF) widened the scope of the law – restricted in 2010 to narcotics and terrorism – to include labour strikes, traffic disruption and the spread of false information.

The lifting of the emergency law was a key demand of protesters who took to the streets last year to call for democratic change and the removal of Mubarak.

SCAF’s decision to partially lift the laws, which give police far-reaching powers, will likely not satisfy rights groups that have objected to the repeated use by the military of the term “thugs” to justify crackdown on protesters.

The term has been used to ridicule the military in the independent press, and some of the young protesters in recent demonstrations have been chanting, “we are thugs!”

“This is not a real cancellation of the state of emergency,” said Essam Sultan, a newly elected member of parliament from the Wasat Party, a moderate Islamist group.

“The proper law designates the ending of the state of emergency completely or enforcing it completely, nothing in between,” he said.

At least 80 protesters have been killed by troops since October.

Tantawi was Mubarak’s defence minister for some 20 years, during which he was known to be unquestioningly loyal to the ousted leader.

He and the generals on the military council, according to activists, remain beholden to Mubarak, whose approval was essential for their promotion through the ranks. Mubarak ruled for 29 years, and the emergency laws were in force throughout.

The election for the 508-seat chamber was held over a six-week period starting November 28. The Islamist-dominated legislature’s first priority is to name a 100-member panel to draft a new constitution.

The next step would be to put the draft to a vote in a nationwide referendum whose date has yet to be announced.

Presidential elections are to be held before the end of June, and the military has said it would return to its barracks when a new president is sworn in. 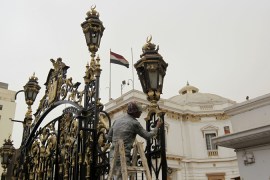 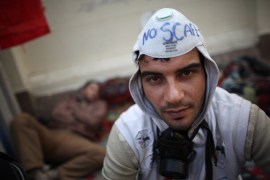 The recent Egyptian crackdown on American NGOs may be a sign to the Americans that its foreign aid is replaceable.