UN troops in Cote d’Ivoire are ready to open fire to defend their mandate, which includes the protection of civilians, the UN peacekeeping chief said.

Gbagbo faces growing international pressure after European Union countries agreed to impose a travel ban on him and his entourage for failing to step down after a November 28 election the outside world and many in the country says he lost.

The US said it was also readying sanctions and repeated its call for Gbagbo to stand down.

“It is time for him to go,” Robert Gibbs, White House spokesman, said.

Alassane Ouattara, Gbagbo’s rival claimant, has the backing of the UN, the African Union, Washington and the European Union but Gbagbo retains control over the army in a power struggle that has raised fears of a return to war in the world’s top cocoa grower.

The Security Council backed a resolution extending the local UN mission for a further six months and urging it “to support, in coordination with the Ivorian authorities, the provision of security for the government and key political stakeholders”.

It warned that anyone responsible for attacks on civilians or peacekeepers could be hauled before an international tribunal.

Noting violence which has already claimed over 50 lives, the Council urged the force to fulfilll a mandate to protect civilians.

But it was not immediately clear whether it represented the toughening of the mandate which Ouattara has called for.

Gbagbo’s government repeated demands for the force to leave.

“If, against our will, it wants to keep this force on our territory, we will not cooperate with it. That means the leader of that force will not have a formal interlocutor – how are they going to work?” Emile Guirieoulou, the interior minister, said.

Hours earlier, EU countries agreed to impose a travel ban on Gbagbo, his wife and 17 of his close allies.

“We expect the ban to be adopted by Wednesday and come into effect on Thursday, effective immediately,” Maja Kocijancic, European Commission spokeswoman, told reporters in Brussels, adding that governments were also discussing a freeze on assets.

The EU travel ban list is expected to include top security, ruling party and regular army officials as well as figures in the entourage of Gbagbo and Simone, his powerful wife.

“I don’t think this will advance things. It just shows that those behind them haven’t got much room for manoeuvre,” Pascal Affi N’Guessan, a Gbagbo aide, said of the sanctions.

Guirieoulou, the interior minister, said of the sanctions, “They make us smile.”

Tensions in Cote d’Ivoire have pushed cocoa futures to four-month highs in recent weeks on market fears of a disruption to supplies.

So far, cocoa beans have been getting through to port but there have been delays in registering them for export.

Intended to heal scars in a country ripped apart by a 2002-2003 civil war, the election has only accentuated the divide between the Gbagbo-held south and rebel-held north.

Ouattara’s eight-point poll victory was overturned on grounds of alleged fraud by the Constitutional Council, a top legal body led by a staunch Gbagbo ally.

But he said the mission, known as UNOCI, would not be deterred from doing its job.

“We remember one of Winston Churchill’s maxims: ‘If you are going through hell, just keep going’,” he said. 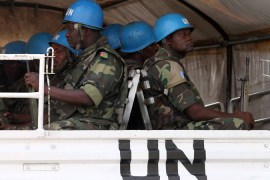 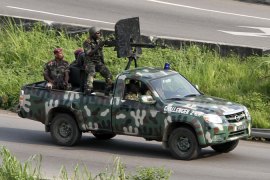 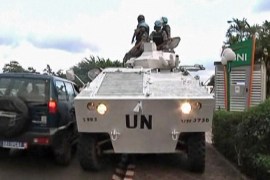 Kenya issues sternest warning yet to Cote d’Ivoire’s incumbent president to step down. 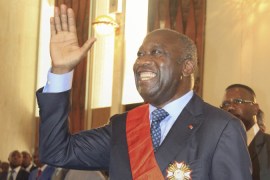