“Remember, remember the 2nd of November, gun-toters, tea-baggers and plot.”

Why yes, to answer your query, this is my very own version of the infamous Guy Fawkes poem, based on the actions of either the traitorous criminal of British lore, or a liberty-loving patriot if one accepts the raison d’etre of the film V For Vendetta.

Meanwhile, the plotters I refer to in my little ditty are the ones whose dreams of “liberty” mean bringing America’s political progress to a stunning halt on election day—the curb-stomping base of a brave new and neurotic Tea-Party GOP, who lack the constitution to actually support what’s in the Constitution. Lets also not forget the ghosts of Strom Thurmond, played on C-SPAN and at your local White…I mean Conservative Citizens Council meeting by the bilious Blue Dog Democrats.

And the starring role in this circus of the demented, of course, is reserved for their benefactors, those wonderful and wily plutocrats, who buy and sell politicians like a bevy of free-basing Vito Corleones.

That is what we have to look forward to on November the 2nd, when the circus actually reaches town. When some of the cross-eyed lunatics who look like they’re about to gain higher office in the United States inevitably do, one can see us looking back on this date—while staring into a candle and chanting “The Horror”.

This is because we may be privileged enough to be granted new members of Congress such as Republican Easy Rider Allen West, who likes to hang with a criminal biker gang in Florida that, as The Washington Monthly reported, “the Justice Department believes is involved in drug running, arson, prostitution, robbery, and murder”. I guess they couldn’t fit extortion, rape, and aggravated assault into their busy schedules.

Or then there’s GOP Congressional candidate Rich Iott of Northern Ohio, who likes to “bond with his son” by dressing up as SS storm troopers over the weekend, to mount an assault on whoever gets to play the Hungarian Jews that this unit hunted down and killed during World War II. Because, really, who doesn’t pine for the vicarious thrill of genocide reenactment?

And to think that I considered sitting down with my 4-year old, watching SpongeBob and reading him my friend Adam Roth’s thoughtful children’s tome, Checking Up On Daddy, a good way to continue the bonding process. Now I know that not teaching the kid to goosestep and covet the Sudetenland may cost me big time in our future father-son relationship.

Meanwhile, Democratic West Virginia Governor-cum NRA Lapdog Joe Manchin, didn’t go all in on the Beer Hall Putsch, but thought it responsible to film an advertisement for his US Senate run during which he shoots a copy of the very weak, non-passed federal-climate-change legislation. Drama alert! But really, who knew we had such a modern, well coiffed Sir Robin of Locksley among us, you know, except the caring about the poor people part.

So I think I’m just gonna go ahead and agree with another brilliant author and friend, Ari Berman, whose book Herding Donkeys and subsequent pieces in The New York Times and Huffington Post have pointed out that trusting Democrats such as this to act in the public interest is akin to renting a room for Charlie Sheen in a 5-star hotel, hooking him up to a Jack Daniels drip, and assuming everyone will be alive in the morning.

Speaking of ole Charlie, how did he make it to the crowd outside that Rand Paul/Jack Conway debate so quickly this past week?

So where does this all leave us? Is there any hope for the country post-November 2nd, or should we all start storing jugs of water, saltines, and Cipro in our basements, while wearing that space suit Marty McFly uses to convince his old man to date his mom in Back to the Future?

Truthfully, I don’t think that much will change, for the simple reason that unless the Democrats forcefully push through filibuster reform, it doesn’t matter if the Senate is filled with the likes of Rand Paul, or Roger Clemens, or Rasputin.

Well, except the PED parties thrown by that second guy would most definitely rock the casbah . But I digress. The legislative gridlock is such that it doesn’t just block the ideas of good public servants, but also those whose priorities are sexting the pages or allowing BP to drill at Ground Zero.

The bigger danger is how these newly elected “public servants” will effect what is politically acceptable, with their bigger mics and a whiff of, dare I say, the Establishment bestowed upon them post-victory. Will they be able to make their platform provided by Pinhead seem mainstream, from a good leeching to lower your fever to the ongoing search for half-humans, half-monkeys to prove that evolution did not in fact not occur? In the latter case, by the way, I really do believe a close genetic study of Steve Tyler is warranted.

But, to return to the point: Italian Marxist Antionio Gramschi famously said “he who changes the culture changes the politics”. So we’d all do well to pay attention, and if possible participate, in the ever-shifting conventional wisdom and underlying assumptions that animate our political culture. Because if we don’t, even if Sarah Palin’s newly elected short-bus stepchildren can’t pass legislation, they can change the conversation with their constant blather. Which if repeated enough will grow in size and power, much like a hungry Puma or Rush Limbaugh’s head. 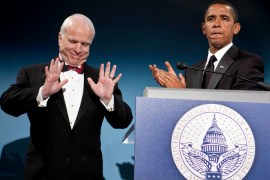 US: myth of the two party system

Would the US look much different if John McCain had beaten Barack Obama to become president? 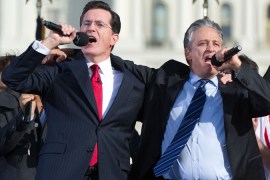 TV satirists host Rally to Restore Sanity to take the heat out of an ill-tempered political climate. 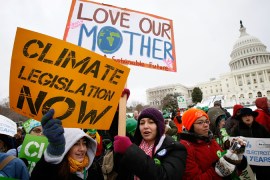