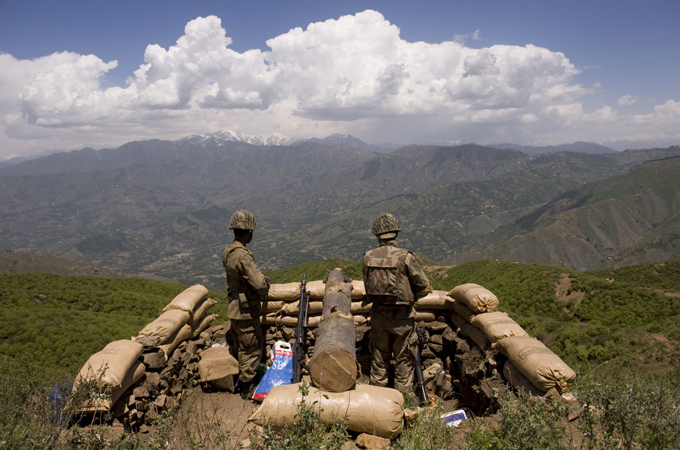 The blurry video, which runs for more than 5 minutes, shows men in Pakistani military uniforms lining up blindfolded young men with their hands tied behind their backs before gunning them down.

The Pakistani military has said the video is fake.

An organisation called the International Pashtuns’ Association posted the video on Facebook and says that the incident took place during the military’s crackdown on the Pakistani Taliban in the Swat valley in the summer of 2009.

The Pakistani government launched the operation after coming under pressure from Washington to do more to stop cross-border Taliban attacks on Nato troops in neighbouring Afghanistan.

The location cannot be identified from the grainy footage, which appears to have been shot on a mobile telephone, but explosions can be heard in the background as the men are shot dead by the firing squad.

As the soldiers prepare to fire, one of them asks the commander: “One by one, or together?” “Together” is the reply. The conversation is in Urdu, the language used by the Pakistani military.

The authenticity of the video cannot be independently confirmed by Al Jazeera, and the Pakistani government have said it was fabricated. But US media has quoted anonymous American officials who believe that the video is authentic.

The uniforms and rifles appear to be consistent with Pakistan’s standard military equipment, and a former Pakistani general told Al Jazeera that while the video could not be verified, the images should be taken seriously.

“We have to take it at face value at the moment, and take it seriously,” said Talat Masood. “My view is that the CIA and ISI are in a much better position to authenticate this.”

“It looks as though they are Pakistani troops, but there are several other aspects that need to be re-checked before we can say that it is authentic.”

He said that he thought the Pakistani military would “absolutely” investigate the authenticity of the video, because if confirmed it could do serious damage to Pakistan’s strategy in tackling the Taliban.

“I’m sure that this is not the military policy,” he said. “It would undermine the whole war on terror, which is not just military, but about winning hearts and minds.”

Human rights groups say the video fits in with “credible allegations” they have received about the conduct of Pakistani troops. The Human Rights Commission of Pakistan said in June that 282 extra-judicial killings by the army had taken place in the Swat region in the past year.

Amnesty International told Al Jazeera that while it could not confirm the authenticity of the video, but that it has “received credible reports of suspected insurgents being summarily executed by the Pakistani security forces in Pakistan’s swat valley.”

“There have also been a number of sightings of mass graves in the region, with notes attached to the dead bodies, warning local people not to join the Taliban otherwise they would meet the same fate,”  said Maya Pastakia, Amnesty’s specialist in Afghan and Pakistan. She said it was impossible to definitively tell who was behind the killings, pointing out that tribal conflicts could be playing out in an environment of chaos and insecurity.

Human Rights Watch says it has received “numerous credible reports of extra-judicial executions allegedly committed by soldiers operating in Swat,” adding that the Pakistani military has not investigated the allegations sufficiently.

Meenakshi Ganguly, Human Rights Watch’s South Asia Director, also called on the Pakistani authorities to investigate the video, and if it turns out to be genuine, to hold those responsible to account.

“We hope this is not true, but the government of Pakistan must investigate thoroughly. We have documented allegations in the past of extra-judicial killings carried out by the Pakistani military,” she told Al Jazeera.

If confirmed, the video could raise a legal headache for the US, which is bound by law not to give military aid and assistance to foreign armies found to have committed gross human rights violations.

Considered a key partner in the efforts to defeat the Taliban and Al Qaeda in Pakistan and Afghanistan, the Pakistani military has received $10 billion from Washington since 2001, when the Taliban were overthrown by a US-led coalition.

The US State department described the images as “horrifying,” and has said that the issue will be raised with the Pakistani government by Anne Patterson, the US ambassador to Pakistan.