Al Jazeera’s Kamal Hyder, reporting from just outside Buner, said: “We have been told that the military has indeed taken back control of the district headquarters in Dagar after they surrounded it earlier this morning.

“There is stiff resistance from Taliban in certain areas but the military is still pressing on, using helicopter gunships and even main battle tanks in this operation which is said to be continuing.”

A Pakistani military spokesman said: “The airborne forces have linked up to police and Frontier Constabulary in Dagar. A link-up with ground forces is in progress.”

The army said it had killed about 50 Taliban fighters and destroyed two explosives dumps. One soldier was killed.

Troops also recovered 18 of around 70 police and paramilitaries abducted by fighters in Buner on Tuesday, Major-General Athar Abbas, the chief military spokesman, said.

Three members of Al Jazeera’s reporting team in the Swat valley, an area neighbouring Buner, were injured after being shot at.

It is not known who attacked the journalists from the Arabic channel.

Abbas identified the correspondent as Abdul Rehman  Matar, and said he was wounded after his vehicle was caught in crossfire in Dagar.

“He was given medical treatment and he is stable now.”

About 500 Taliban fighters are in Buner and it might take a week to clear them out, a Pakistani military spokesman said.

Major Nasir Khan, a military spokesman, said that jets had bombed positions in mountains in the Babaji Kandao area of Buner.

Buner, Lower Dir and Swat are covered by the Malakand peace deal, which allows the Taliban to enforce its strict interpretation of sharia, or Islamic law, in the region in return for a truce.

Sufi Muhammad, a local religious leader who has been holding peace talks with the central government, has suspended dialogue with Islamabad as a result of the army assault.

Against this backdrop of intensifying violence, Asif Ali Zardari, the Pakistani president, called on the nation to put political differences aside and support troops fighting the Taliban.

In a statement on Wednesday, he said that nationwide support was critical in ensuring the protection of the rights of Pakistani citizens against Taliban advances.

“This is the only way to demonstrate our will, to keep Pakistan as a moderate, modern and democratic state where the rights of all citizens are protected,” Zardari said.

“The operation in Buner and Lower Dir is meant to re-establish the writ of the constitution.” 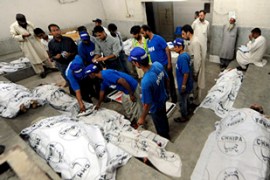 Dozens of people killed amid dispute between Mohajirs and Pashtuns in Pakistan city. 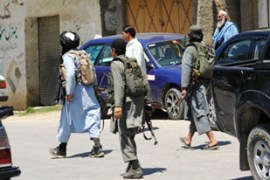 Taliban members from Swat valley say they have left Buner in commitment to peace deal. 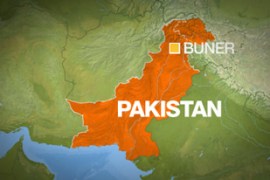 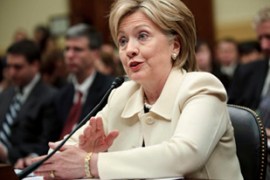