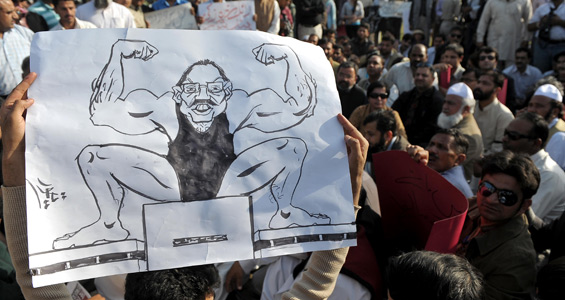 It has been 24 hours of hectic diplomatic and political activity. Yet we seem to be no nearer a solution to the grave political crisis Pakistan faces.

For a journalist covering this kind of story, the problem is always the flow of information.

Take for example the story that is currently running here: the resignation of Sherry Rehman, minister for information and broadcasting.

Rehman has been a key figure in her party, the Pakistan People’s Party, for a long time. She was a close confidante of Benazir Bhutto, the PPP leader who was assassinated in 2007. She was often seen side by side with her. She was there on that fateful day when Bhutto was killed.

After the killing, Rehman threw her support behind Asif Ali Zardari, Bhutto’s husband. Many say she helped manoeuvre him into power.

Her resignation is shrouded in mystery … when it was announced in the early hours of Friday it met with a rejection from the government. Suddenly the government backtracked, and all the way through Saturday morning confusion reigned as to what had happened.

In this case, all journalists can do is speak to the key players, monitor the media and chase the truth.

The problem with the truth is it often does not want to be chased.

Khawaja Naseer is a seasoned journalist working here in Lahore. He smiles as he watches me frantically working the phones.

“Imran, this is all a game … a drama. These people are all out for themselves… It’s not about whether Sherry Rehman has resigned or not … It’s about the fact she leaked it to the media and made it public … That is the only truth here.”

He is right – in a sense. The game here is what matters and who is perceived to be winning it.

Asif Ali Zardari seems to be winning that game on the streets. He has managed to stop the “long marchers” from leaving Pakistan’s big cities and reaching Lahore.

His policy of mass arrests and clampdowns means the city is deserted. By now, the city should have been packed with protesters waving political colours, chanting slogans and excited about marching on the political capital, Islamabad. Instead it’s quiet.

Politically though it’s a different scenario: The resignation of Rehman; the support by Nawaz Sharif, a former prime minister and oppostion leader, for the Long march; and intense pressure from the US have all left Zardari looking increasingly isolated and weak.

But political observers here say he should not be written off yet.

In the middle of all of this is the lawyers’ protest movement. They are not politically affiliated. They only have one agenda and that’s the restoration of judges sacked by Pervez Musharaff, the former president.

However, the politicians that support them may have other agendas.

If one of those politicians, Nawaz Sharif, gets the political gains he wants, he may well bid the lawyers farewell and good luck.

The fear among the lawyers is articulated by Khawja Latif, a senior advocate based in Lahore. “If Nawaz does not go with us on the Long March to Islamabad, I hope it’s a strategy. His life is under threat, but we are hopeful he will stick with us.”

As it stands, Sharif is holding his cards close to his chest. Zardari and the lawyers  would seem have played their hands and are in a bluffing game.

And amid the games and drama the political future of Pakistan lies at stake.