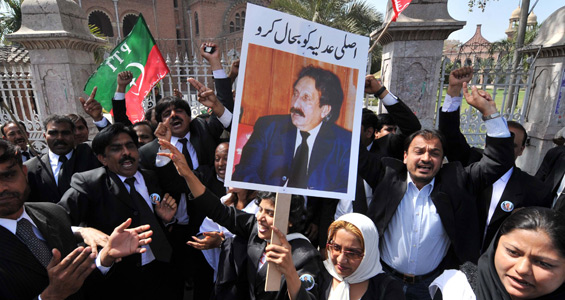 I spent much of Friday standing in the blistering heat outside the farm residence of Nawaz Sharif, the leader of Pakistan’s largest opposition party, the Pakistan Muslim League-N (PML-N).

We weren’t allowed in, of course. Apparently the former prime minister and champion of Pakistan’s sacked chief justice, Iftikhar Chaudhry, was busy with meetings.

It looked very nice from the outside, even with the massed members of the elite police force aiming assault rifles in our general direction. I was assured it was nothing personal.

I thought it strange that Sharif was not outside, selling his message of revolution to the gathered media. After all, this was a man with a country to rally.

He had spent the last few days traipsing around the Punjab and North West Frontier Province speaking eloquently about how Pakistan should rise up and support the sacked chief justice.

But just 24 hours before the “Long March” supporting that very call was due to reach Lahore, what did we get? Silence. A silence that was beginning to be noticed.

The press corps of Pakistan began to develop their own theories as to why the normally noisy Sharif was playing it quietly.

“It’s all over,” said one journalist. “Sharif has done the deal, the Long March will be cancelled and the Sharifs will once again rule Punjab.”

A shortish fellow with a limp and a camera attached to one eye chimed in: “This is all a drama for the Americans who really control our country. Sharif is just trying to scare them.”

I listened carefully to the idle talk. Some of it made sense, some of it plainly did not. I put it down to the heat and boredom.

It was a little after 5pm when the reports began to come in. Perhaps the conspiracy theories were not so conspiratorial after all.

This was big, if true, and could spell the end of the Long March.

Shahbaz Sharif, Nawaz Sharif’s brother, at this time was chief minister of Pakistan’s most powerful province.

He was duly dethroned and a Zardari loyalist, Salman Taseer, given the job as the governor of the Punjab.

The Sharifs were reportedly furious, and put their support behind the lawyers’ movement – hence the Long March.

After that, the reports came in thick and fast. “The Long March will be cancelled”, one headline shouted from my screen. “Army Put Pressure on Zardari to do deal with Sharif”, read the news bulletin.

Zardari’s party spokesman weighed in: “No decision has been made on governor’s rule”.

At the time of writing this, what is really happening is somewhat confused.

We are expecting a reliable announcement on Saturday, but in my experience I would not bet the farm on it.

Whatever happens next, Friday’s episode reminds me of an old Pakistani joke: “Ask six politicians what the colour of the sun is and you will get 12 answers.”