Karzai said that he had repeatedly asked foreign forces “to avoid unnecessary and unuseful [sic] operations.

“But unfortunately, despite our efforts, this has not been applied and our people have been killed and wounded.”

Karzai’s statement came against a backdrop of intense fighting between Western forces and the Taliban.

About 80 Taliban fighters had been killed in clashes with Nato and US-led forces in Afghanistan during the past 24 hours, a military spokesmen said.

Most of the casualties came in air and artillery raids on one group of 45 men and several smaller groups near the Pakistan border late on Friday.

An earlier raid on Friday in which a number of civilians were killed is understood to have angered Karzai.

The International Security Assistance Force (Isaf) said the deaths on Friday night came after fighters were seen preparing to attack a base in Paktika province.

Isaf forces conducted reconnaissance to confirm their suspicions and the suspected Taliban fired on a US-led multinational-force aircraft, he said.

Major Donald Korpi, an Isaf spokesman for eastern Afghanistan, said “up to 60 Taliban were killed”.

Thomas did not give a figure for the dead but did not dispute the toll, saying that such numbers were arrived at through various battle damage assessments.

Commanders in the area said it was the largest formation of Taliban fighters there since January, he said.

The US-led multinational force reported separately that soldiers working with Afghan troops had killed nearly 20 “enemy fighters” in a seven-hour battle in the southern province of Kandahar, the birthplace of the Taliban movement. 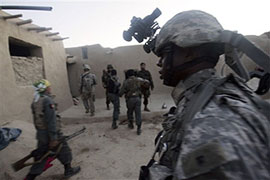 About 1,500 Taliban suspects since March,
the interior ministry says [AFP]

The attackers had initiated the battle by opening fire with machineguns, it said in a statement.

Several more fighters were reportedly killed in the adjoining province of Uruzgan when a firefight erupted after troops were shot at with multiple rockets.

The Afghan interior ministry announced on Saturday that Afghan and foreign security forces had killed more than 1,500 suspected Taliban fighters in about 80 operations across the country since March.

About 530 more, including 23 would-be suicide bombers, had been captured, the ministry said in a statement.

The 17 were kidnapped while travelling in Ghazni province, Mohammad Shohab Hakimi, the head of the Mine Detection and Dogs Centre, said.

Hakimi said men identifying themselves as Taliban fighters had called his organisation to say they were holding the men.

He said: “Taliban called us and told us that they were abducted with all  their materials. They have some questions for them and after that  they’re going to be released.”

In a related development, a Pakistani official said on Saturday that nine civilians had been killed in the North Waziristan tribal district by a rocket fired by “coalition forces” in Afghanistan.

Major-General Waheed Arshad, Pakistan military spokesman, said: “Afghan and coalition forces were conducting an operation against militants and a few rockets came in our area.

“One of the rockets hit a house in which nine people were killed.

“We have protested against the incident and asked explanation from Afghan and coalition forces.” 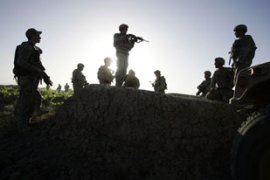 At least 25 civilians, including 12 of one family, are killed in a Nato air assault. 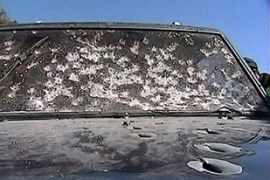 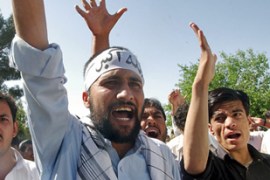 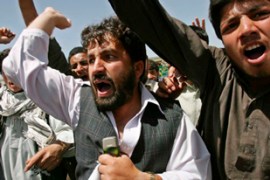