Kaderbhai said: “Cinema reflects the society it lives in, and films can change the world.

“It’s quite timely at this point, it’s important to show a lot of reflections of the Middle East.”

Organisers of the event have said that if Arab Cinema Weekend wants to reshape opinions, it must reach beyond the traditional audience of the Arab diaspora in London.

One such film with resonance is Oscar nominated Days of Glory – director Rachid Bouchareb’s depiction of France‘s forgotten soldiers, plucked from the colonies to fight in two world wars and in Vietnam.

The film tackles the issue of discrimination against foreign-born war veterans who were paid smaller pensions than those veterans born in France.

It has had a tangible impact for hundreds of thousands of people. After seeing the film, the wife of Jacques Chirac, the French president, was said to be in tears.

The day the film opened in France, Chirac addressed his nation and announced a change in policy regarding veterans who had fought in former French colonies.

For Bouchareb, a French citizen of Algerian descent, hearing those words was even more important than having one of the country’s biggest films of the year.

“When you start a project like this, you feel you are not alone,” he said.

“I feel when we shoot a movie, we have a strong power to change something.”

But it is the film Paradise Now, a chaotic day in the life of would-be Palestinian suicide bombers, which has been touted as the big hit for the resurgence of Arab cinema.

It won a Golden Globe in 2006 and was nominated for the best Foreign Film Oscar.

It also provoked a debate about Palestinian life under Israeli military and administrative occupation. Essential viewing inside Israel, the film struggled to get wide distribution in the US.

Israel faced a backlash after calling for it to be reclassified at the Oscars – they were angry the film was representing ‘Palestine‘, because Palestine, they said, was not a county.

Paradise Now has been pulled from the Arab Cinema Weekend’s schedule, to make room for other success stories which haven’t received such widespread coverage in the West.

Based on a best-selling Egyptian novel, and one of the most expensive Arab films ever produced, Yacoubian Building tackles social taboos such as homosexuality, drugs and government corruption in Cairo.

Bafta also has high hopes for Ahlaam, which uses the symbolism of a psychiatric asylum to tell the story of post-invasion Baghdad.

The Iraqi director behind the film, Mohamed Al-Daradji, said it was his way of reclaiming a narrative hijacked by Western journalists.

“It is time for us to tell our message, send our voice as Arab filmmakers, and tell a different image, an image that hasn’t been seen because when people see my film they will be just in shock, they see how the reality is different,” he told Al Jazeera.

Nevertheless, until Arab cinema escapes the final cut of government censors, Arab filmmakers are going to have to rely on Western institutions, like Bafta.

Film distributors have been touring the festival circuit, and by devoting a weekend to the Arab world, Bafta is confident it will raise Arab cinema’s profile.

Kaderbhai said: “Because BAFTA is screening it, it adds kudos to it.”

Al-Daradji believes Arab governments must not act as impediments to the resurgence of regional films with powerful socio-political messages.

“The way you build a nation isn’t just by politicians, it is by each individual and I think as Iraqis or as Arabs, there is a responsibility to bring this new voice.” 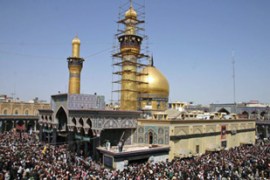 Lebanese animators bring epic tale of the Prophet’s grandson to the big screen.