About four million people are eligible to vote in the election that will choose 83 members of the legislature from among 2,158 candidates from 26 political parties and groups.
Polling stations opened shortly after 7am (05:00 GMT) and are scheduled to close at 4pm.
Yayi, a former banker, hopes the election will give his coalition a majority and strengthen his administration in Benin, where he says his fight against widespread corruption prompted an assassination attempt against him two weeks ago.

Previous elections have been tarnished with fraud claims and organisational problems since Mathieu Kerekou, a military ruler and former Marxist, introduced multi-party democracy in 1991.

A shooting attack on Yayi’s convoy as he returned from an election campaign rally in the north of the country raised questions over the president’s security.

Yayi said the attack was an assassination attempt by those opposed to his anti-corruption campaign.

A former head of the West African Development Bank whose election ended more than three decades of rule by a political clique, Yayi has made fighting corruption a cornerstone of his plan to revive Benin‘s cotton-based economy. 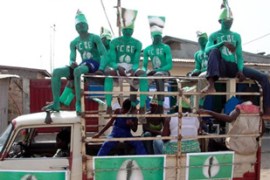