Opposition figures and Western governments had demanded the state of emergency be dropped.
On Thursday Saakashvili also said that presidential elections in the country would be brought forward to January.
Opposition anger

Shota Utuashvili, a spokesman for the interior ministry, told AFP that police would also investigate allegations of abuse during Wednesday’s crackdown, in which almost 600 people reportedly sought medical treatment.

Saakashvili imposed emergency rule on Wednesday and ordered troops on to the streets of the capital, Tbilisi, following bloody protests in which police officers fired rubber bullets, tear gas and water cannons to disperse protesters.
Opposition groups and protesters accuse the Georgian president of Georgian president of corruption and increasingly autocratic rule and have urged him to bring forward parliamentary elections.
Saakashvili, in turn, has accused Russia of stirring unrest.
The Russian foreign ministry denied the charges and announced on Thursday it intended to expel three Georgian diplomats in response to a similar earlier move by Tbilisi.
Also on Friday Georgian authorities also said that they suspected Badri  Patarkatsishvili, a wealthy Georgian businessman, of plotting a coup  against the government and that they were seeking him for questioning.
Patarkatsishvili had issued a statement from London in which he criticised Saakashvili for the state of emergency.
Calls for restraint
Nick Clark, reporting for Al Jazeera in Tbilisi, said that there was a sense of relief amongst the Georgian people that the concession of a presidential election had been wrung from Saakashvili.
However there was still a deep sense of shock and fear over the crackdown, he added.
Both the US and Nato, which Georgia is hoping to join, have criticised the imposition of emergency rule, and the closure of media outlets in Georgia.
Jaap de Hoop Scheffer, Nato’s secretary general said on Thursday that such acts were “of particular concern and not in line with Euro-Atlantic values.”
The US, which is Saakashvili’s main backer, has also called for restraint.
Source : Al Jazeera 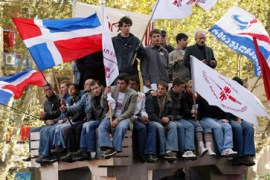