Benazir Bhutto arrived to a tumultuous welcome when her plane touched down at Karachi airport on October 18 – a day that ended in carnage when at least 130 people were killed in a double bomb attack aimed at assassinating her.

The former Pakistani prime minister was quick to point the finger at the Taliban, al-Qaeda and pro-Taliban Pakistani tribal fighters, saying that a “brotherly country’s” intelligence agencies had informed her of the plot.

However, Baitullah Mehsud, a leader of Pakistan’s tribal fighters, was also quick to deny any involvement in the blasts.

And the attack did not bear the hallmarks of al-Qaeda, nor did they claim responsibility.

Many senior analysts believe Benazir’s return to Pakistan has been sanctioned by Washington.

But Pakistan has already paid a terrible price for its alliance with the US in the “war on terror”.

It has born heavy casualties that surpass the total number of US and Nato losses in Afghanistan since the US-led invasion there in 2003.

She has also made statements about giving the International Atomic Energy Agency (IAEA) access to Dr Abdul Qadeer Khan, the founder of Pakistan’s nuclear program, over his role in the clandestine spread of nuclear technology.

A suggestion that has been met by outrage from some sections of the population, where Qadeer is still viewed as a national hero.

She is no longer seen as the victim and has lost the credibility her father, also a former Pakistani leader, once enjoyed.

As Benazir joins Musharraf in what they say is a fight against extremism, many fear such talk may further polarize the country on ideological lines and even risk plunging the country into civil war.

It may now find itself in a quagmire in the tribal areas of the North West Frontier Province.

Benazir is back in Pakistan and now Nawaz Sharif, another former prime minister, is set to return again after he was forcibly deported when he tried to come back to Pakistan in September after seven years in exile

Now this nation of over 160 million people will be hoping that his return is not also marred by violence. 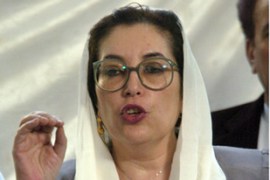