“The president told them that no dialogue could take place until Hamas back tracks and renounces what it acquire in its illegal coup,” the presidency said in a statement.

Abbas has long ruled out any dialogue with Hamas unless the movement returns Gaza to his authority after what he calls a coup d’etat that has effectively split Palestinian society into two entities.

A Hamas spokesman in Gaza played down the meeting, which came ahead of a planned US-sponsored peace conference.

“They prayed with president Abbas who invited them with other Islamic dignitaries. Nothing more. That does not amount to dialogue,” Sami Abu Zuhri, a Hamas spokesman, said.

In Ramallah, al-Shaer said he and his colleagues had discussed with  Abbas “the internal situation in the Palestinian territories in an open manner.

“This sends a positive signal to our people and decreases tension.”

Walid Batrawi, Al Jazeera’s correspondent in Ramallah, said the meeting would be viewed favourably by residents in the occupied West Bank.

However, he said that the relationship between Hamas and Fatah would not be repaired fully by the meeting.

“Hamas had taken over all the military establishments in the Gaza Strip and stormed into the house of the president,” he said.

“We have in the past heard the president and his aides say that they will not talk to the Hamas leadership in Gaza unless Hamas is willing to give all the institutions in Gaza to the Palestinian leadership – which is the presidency.” 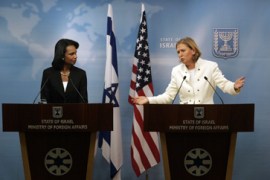 Rice leaves region with little progress made between Israelis and Palestinians. 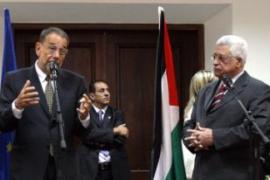 Hamas rejects Palestinian president’s move, seen as aimed at marginalising it in Gaza.