The Brotherhood said that those arrested on Sunday included Mohammed Ali Bashar, a member of the Brotherhood’s guidance office, which acts as its executive, as well as Essam Hashish, an engineering professor at Cairo University.
The arrests were the latest in a campaign that has intensified since Islamist students angered the government in a protest march last month in which they wore militia-style uniforms and black balaclavas.
State media, in charges dismissed by the brotherhood, said that the march showed the group was training a militia.
Presidential warning
Egypt’s largest opposition movement rebutted claims made on Friday by President Mubarak that the group poses a national security threat.
The brotherhood accused Mubarak of making the Egyptian public unnecessarily anxious.
Mubarak said the country would face international isolation which could threaten foreign investment should the Islamist movement become more powerful.
“The outlawed Brotherhood group is a danger to Egypt’s security because of its religious discourse,” he said.
“Many would take their money and run away from the country. Investment would stop and unemployment would increase.”
“Egypt would be totally isolated from the world.”
Ban
While the brotherhood is officially banned, members elected as independents hold 88 seats in the 454-seat lower house of parliament.
The group says its aim is to persuade Egyptians through democratic means to choose an Islamic state.
The movement’s deputy leader described Mubarak’s warnings as fear-mongering geared at “covering up” to prepare for his son’s succession.
Mohammed Habib, the deputy leader of the Muslim Brotherhood, said: “It’s a whole campaign of fear-mongering to the public, aimed at marginalising us.”
Opposition parties say Mubarak, 78, is changing the Egyptian constitution to pave the way for his son Gamal, 43, to succeed him.
More than 100 group members have been detained since the beginning of December.
Mubarak’s ruling party, the National Democratic party, says the constitutional amendments discussed in parliament are part of an ambitious political reform programme and would make it easier for candidates to run for president.
Habib said the state crackdown was aimed at diverting attention from ongoing discussions in parliament to amend 34 articles of the constitution.
But some of the amendments would effectively hinder the Brotherhood’s ability to compete in presidential and legislative elections.
Party politics
The group denies accusations it wants to establish a hardline Islamic regime in Egypt.
“When we talk about Islam, we don’t talk about monopoly of clergymen or discriminating against the non-Muslims, but about a secular state on Islamic grounds,” Habib said.

However, many critics, including Egypt’s secular opposition groups, say the brotherhood’s agenda is ambiguous and fear the group’s strict adherence to Sharia (Islamic law) could curb civil liberties.

Mohammed Mahdi Akef, the general guide of the Muslim Brotherhood, told Al Jazeera that the group is devoted to setting up a scheme to create a political party.
Leading sources in the group have said that they would not present the application to establish a political party to the state party affairs committee, which they consider unconstitutional.
Akef said the proposal to launch an official party would be presented for public debate during the coming few weeks.
Source: Al Jazeera, News Agencies 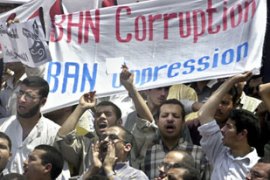 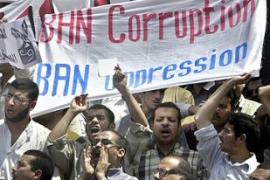 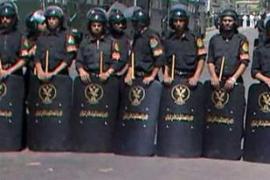