Groups of protesters have been burning tyres daily to block roads since the Lebanese currency tumbled to a new low on Tuesday, enraging a population long horrified by the country’s financial meltdown.

On Saturday, a small group of protesters in front of the central bank in the capital, Beirut, demanded access to their deposits, before walking to the Parliament to express their frustration.

“The dollar is 10,500 [pounds] and everyone has four or five children and their parents. They [politicians] need to feed us,” cried one protester.

“They vaccinated themselves from corona but they opened the country so that people could die,” he added, referring to a group of politicians who inoculated themselves in Parliament last month without prior approval, a move that led the World Bank to consider suspending its financing of vaccines in Lebanon.

Another protester said he was frustrated that other Lebanese were still sitting at home.

Lebanon’s financial crisis, which erupted in 2019, has wiped out jobs, raised warnings of growing hunger and locked people out of their bank deposits. 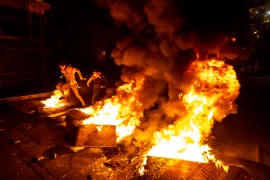 Hassan Diab appeals to politicians to put aside differences, form a new cabinet as anger simmers over financial crisis. 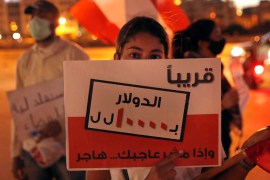 Lebanon’s troubled currency hit a new record low on the black market on Tuesday as the country’s myriad crises deepen. 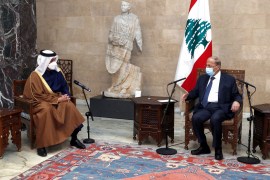 Qatar’s FM says Doha ready to invest in Lebanon ‘as soon as a government is formed’. 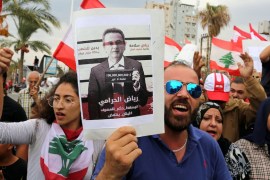