Kuala Lumpur, Malaysia – The Batu Caves temple complex, located in a great limestone cave on the outskirts of the Malaysian capital Kuala Lumpur, for one day a year becomes the main place of worship for Malaysia’s large Tamil community.

More than a million visitors, Hindu pilgrims from Malaysia and neighbouring countries, alongside tourists, congregate at the temple to participate in Thaipusam.

The event is one of the main Hindu celebrations in Malaysia and the biggest festival in the world dedicated to the Hindu god Murugan.

According to Hindu mythology, Murugan, the god of courage, wealth and wisdom, defeated the demons using a spear named Vel, thus saving humanity.

Hindu devotees pray to Murugan throughout the year, asking for help in various aspects of their lives and vow to fulfill a pilgrimage during Thaipusam, if their wishes are granted.

The pilgrims walk barefoot for several kilometres and climb 272 stairs to the temple of Lord Murugan located in the middle of the cave.

They carry offerings that vary from bowls of milk to elaborate contraptions that can weigh up to 80kg known as “Kavadi”.

They often perform acts of self-sacrifice, piercing their skin with silver skewers that symbolise the Vel or with hooks from which they hang fruits or bowls of milk.

The ritual is intended to defeat the pilgrim’s inner demons and gain the god’s blessings. 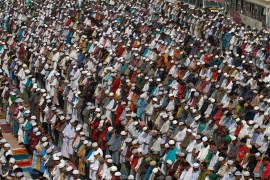 More than two million Muslims from over 130 countries attended the annual Biswa Ijtema gathering in Bangladesh.