Calais, France – In the heart of Europe, near the French city of Calais, thousands of refugees live in a self-managed, makeshift camp built on a former toxic waste dump.

Close to the sea and a few kilometres from the port of the city, the camp, also known as the Jungle, houses more than 3,700 refugees, mostly from Afghanistan, Pakistan, Iraq, Kurdistan, Sudan and Eritrea.

For more than 15 years now, Calais has become one of the points of arrival for thousands of refugees and migrants trying to enter the United Kingdom.

Since last year, due to the biggest refugee crisis since World War II, the Jungle has grown significantly.

In recent days the plight of its residents worsened after a French court gave the green light to dismantle a substantial part of the camp over the next three weeks.

About 1,500 people will be reallocated to the container town which authorities built adjacent to the camp and to other cities across the country.

Although living conditions have been described as an affront to human dignity by the humanitarian organisations working there, the muddy camp now features internal streets, makeshift bars and restaurants and barber shops.

Afkaar, like many other Afghan boys got Italian asylum but could not find work. Now he lives in the Jungle.

“Italy is beautiful, but there is no work. I was free but I had no money for a rental house. What could I do? I decided to come here.” 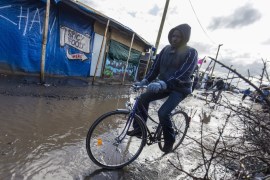 Residents of makeshift “jungle” camp have until Tuesday night to leave or French officials say they will force them out. 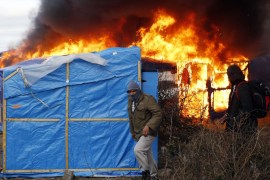