Sirte, Libya – Members of a militia group loyal to Libya’s UN-backed Government of National Accord (GNA) have retaken control of the Libyan coastal city of Sirte from the Islamic State of Iraq and the Levant.

The city, a strategic port for Libya, turned into an ISIL outpost in 2015.

The group took advantage of conflict between various factions of former rebels who emerged as powerbrokers following the death of Libya’s former leader Muammar Gaddafi in 2011.

Sirte, Gaddafi’s hometown, saw fierce house-to-house fighting by the Misrata-led brigade whose advance into the city was initially slowed down by the presence of snipers and explosives as well as lack of ammunition.

The number of civilians, including women and children, trapped in Sirte during the government advance, is still uncertain.

At the height of ISIL dominance in the city last summer, Western officials talked about the presence of some 6,000 ISIL fighters.

Misrata forces, however, estimate that there are now no more than 2,000.

The latest images from November were taken in the neighbourhood of Al Jiza, where commanders of the Misrata military forces fought against ISIL combatants. 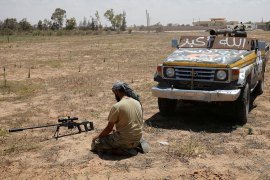