On December 11, Romanians are expected to elect a new parliament that will form a new government. Parties and candidates battle in heated debates in an attempt to sway the electorate in their favour.

Almost 27 years since the revolution that toppled communist dictator Nicolae Ceaușescu, Romania is still the second poorest country in the European Union. Large cities have arguably experienced high development rates. However, out of the population of 20 million, half of Romanians still live in rural areas. For them, prospects still remain unencouraging.

In Romania’s rural areas, infant mortality rates reach levels found nowhere in Europe, according to Eurostat data. Access to basic healthcare services remains difficult in these rural areas, with doctors in urban areas outnumbering those in villages two to one.

Job opportunities are scarce in the Romanian countryside. Most people work on subsistance farms that are too small to be viable outside of producing food for one family. Families are also excluded from insurance and social benefits. While some do receive welfare cheques that only allow for very basic needs, Romanians are often left without support when searching for work and attempting to integrate within society.

According to a World Bank Group’s background study for the National Strategy on Social Inclusion and Poverty Reduction, the relative poverty rate in rural areas is at 38 percent. One in two children in rural areas lives in poverty.

Come election day, Romanians will have to cast their ballot and choose among candidates that have been in parliament for the better part of the past two decades, leaving many voters concerned that Romania is simply facing another round of pompous promises that will get swept off the agenda after the election cycle is over. 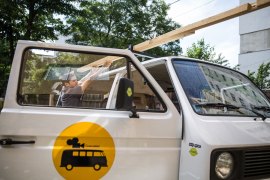 Tudor Baciu drives around the Romanian countryside with his ‘Cinemobile’, screening films in villages with no cinemas. 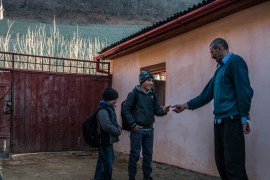 With around 100,000 households not connected to the electricity grid, could solar panels provide the solution?