Delhi, India – Chai, or tea, the national obsession of both India and Pakistan, was trending last week, thanks to a blue-eyed chai wala, or tea seller. After photographs of Arshad Khan from Islamabad in Pakistan went viral, tea sellers became as hot as the brew they sell.

It now looks as though Khan, who has since landed modelling contracts, will be bidding goodbye to his profession. But many tea sellers are not as fortunate.

In India, where chai is sold on the street for as little as five to 10 Indian rupees ($0.075 to $0.150), tea sellers usually start their day at 5am, catering to the daily wage labourers and rickshaw pullers making their way to work.

Most of those in the Indian capital, Delhi, have migrated there from smaller cities and villages with dreams of making a decent living. They spend their days, whether in the heat of summer or the cold of winter, at their stalls.

But while they may sell hundreds of cups in a day, the ingredients – black tea, milk, ginger and cardamom – are expensive and most tea sellers live in poverty.

Some of them shared their stories with Al Jazeera’s Showkat Shafi. 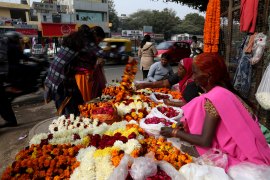 The hardships of Delhi’s street vendors

Many of the 10 million people selling food and goods in India say they have to pay weekly bribes to stay in business.