On the frontline in Ukraine, a group of volunteer fighters composing a unit of the nationalist battalion of the Ukrainian Volunteer Army, operates side by side with official Ukrainian troops.

These volunteers, the majority of whom have nationalist leanings, are still flooding into the war zone, despite the widespread belief that volunteer battalions were fully incorporated into the structure of the military.

Although they do not operate heavy weaponry such as tanks or artillery, they are supported by the Ukrainian troops who do. The volunteers have become hardened nationalists, with their time spent in intense combat at the front. Many disapprove of the way their government has handled this war, which they still refuse to acknowledge as such, instead referring to it as the anti-terrorist operation.

They view their government’s willingness to accept onerous ceasefire terms as nothing short of treason, asking if this justifies the sacrificed lives of their comrades. They believed the Maidan revolution of 2014 would bring about a new Ukraine, and when separatists started the conflict in Eastern Ukraine, they went to fight for what they thought they had won at Maidan – a more just Ukraine. But looking around, they say they see the same old Ukraine, with many of the same players, simply reorganised. 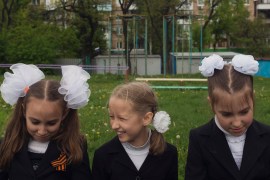 The school on the frontline of the war in Ukraine

School No 58 in Donetsk bears the scars of war – as do its pupils and teachers. We followed them for a year. 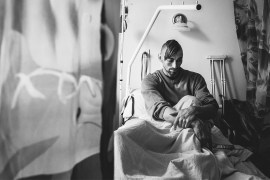 Ukraine: Traumatised by war and PTSD

On the front line of Ukraine’s battle against PTSD, with war veterans, psychologists, priests and volunteers.