By Dave Tacon
Correction, 6/7/2015: An earlier version of this article cited a former US ambassador to the Philippines as saying that 40 percent of all visitors to the country are sex tourists. The former ambassador later apologised for his remarks and admitted that he did not have any data to back them up.
Angeles City, Philippines – Weekends are busy on Fields Avenue in Balibago. Young women greet meandering men and invite them into the bars that line the street. Known as the “supermarket of sex”, Angeles City’s red light district has fast become a top destination for sex tourism.
Male travellers from Asia, Australia, the US, Europe and the Middle East constitute the bulk of the arrivals at Clark Airport, a former US military airbase. From there, many flock to the bars and clubs of Fields Avenue – and to the impoverished young women who work there.
Acquiring their company for the night is straightforward. For a small fee, the men obtain what is known as an “early work release” that permits them to take the woman of their choice back to their hotel.

It is a trade that thrives in the Philippines, where there are an estimated half-a-million sex workers, almost a fifth of whom are minors. Although illegal in the predominantly Catholic country, an estimated $400m is spent on prostitution there each year.
But when the sex tourists depart, they sometimes leave more behind than they’d arrived with. A large number of children have been conceived in such exchanges and while some foreign nationals provide support for and, in some instances, even marry the mother of their child, many more children never even meet their biological father and are left to live in poverty.
Advertisement
Advertisement 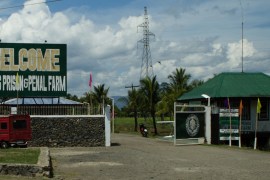 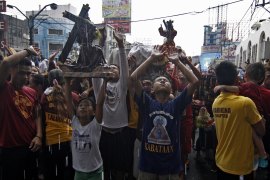 Black Nazarene procession in the Philippines

Millions of devotees joined the Translacion of Black Nazarene statue in Manila, with prayers and hopes for a miracle.