A Palestinian woman who was five-months pregnant and her three-year-old daughter, who were killed in an Israeli air strike near Gaza City, have been buried.

Medical sources in the besieged territory said 30-year-old Noor Hassan and her daughter Rahaf died early on Sunday when their house collapsed following the air strike.

The Israeli army said that its planes were targeting two Hamas weapons-manufacturing sites in the area.

Warning: Viewers may find some of these images disturbing 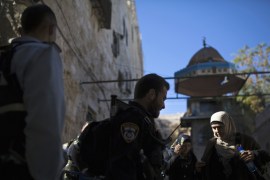 Witnesses dispute Israeli police’s version of event in Old City, saying Palestinian was not holding a knife as claimed. 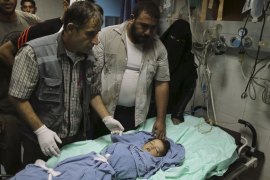