Turkana county, Kenya – Lying in his hospital bed, a bandage wrapped around his foot, Ekidor Esekon remembers little of the day he was shot. What he does recall is setting out early on an otherwise normal morning in early December, to herd cows with his cousin deep in the bush along Kenya’s border with South Sudan.

Then, they were attacked. Shots were fired; his cousin escaped and he found himself in an ambulance, with a gunshot wound near his abdomen and one foot swollen with pus. He knows that some of his animals were stolen but does not know how many are left.

Esekon is one of an increasing number of pastoralist herders caught in a conflict along Kenya’s border with Uganda and South Sudan over dwindling natural resources, exacerbated by severe drought and hunger ravaging the region.

The World Food Programme has reported that at least 2.4 million people in Kenya risk going hungry as drought hits the north and east of the country, a nearly threefold increase from last year. Two consecutive failed rainy seasons and multi-seasonal drought is expected to drive crisis and emergency across eastern and northern Kenya, as well as southern and southeastern Ethiopia and Somalia, where severe food insecurity is expected to continue into 2022, driven by the combined effects of conflict, drought, floods and economic shocks on household food and income sources.

The hospital where Esekon is receiving treatment in Lokichogio, located in Kenya’s northern Turkana country some 30 kilometres (19 miles) from South Sudan, is sparse with few facilities. In a bed near him, an older man rests his leg in a cast on an old piece of ragged foam; another lies on a plastic mattress without sheets attached to a catheter bag. In recent weeks, more gunshot wound victims have been referred to other hospitals in the county better equipped to cope with the wounds.

When there is water scarcity, more attacks tend to happen at water points, explains Esekon. “The bandits attack us frequently, and they come with guns,” he said.

Further southeast, in the centre of a wide, dry river bed, a group of camels and goats surround women wrapped in red and orange shawls with colourful beaded neck-dresses. In the midday heat, the women peer into a deep hole in the riverbed, searching for water. The communities in this area of Loreng, bordering Uganda, are taking it in turns to share water from the hole, making sure to bring their children with them so they too can quench their thirst.

“We are heading into the worst situation, we are not seeing any sign of rain coming,” said Kacimapus Ichor. “This one is worse because we don’t have water and also we are being threatened by enemies,” she added.

Usually, water is drawn in turns according to an agreement reached between local communities. But such arrangements do not exist with “enemies”, a broad term Ichor uses to describe tribes from nearby Uganda and South Sudan searching for food and water, making fetching water and finding pasture for their animals more dangerous. 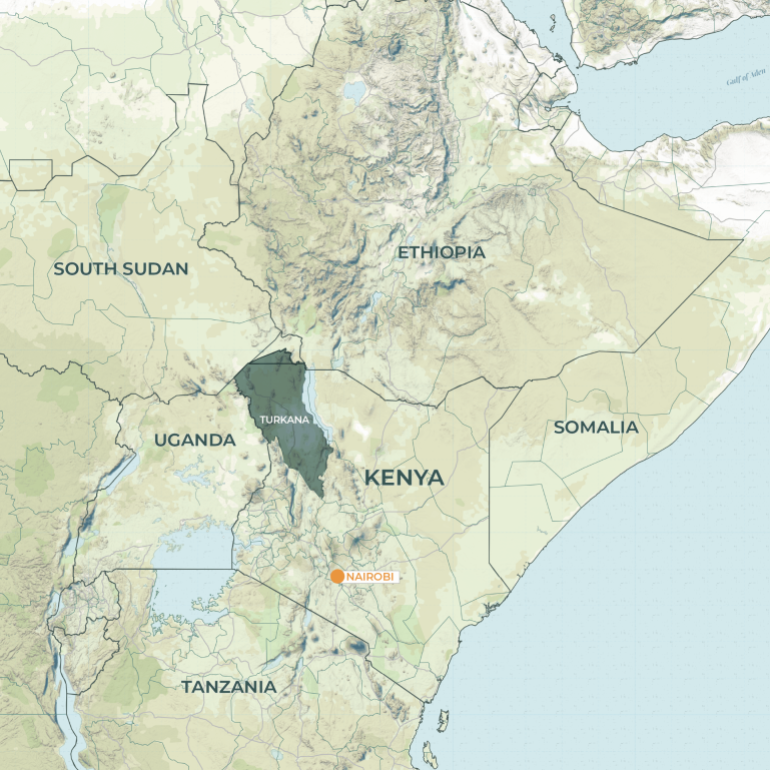 Ezekiel Dida, the programme manager at the Lotus Kenya Action for Development (LOKADO), an organisation set up to address cross-border conflict, acute poverty and illiteracy in northwestern Kenya, said “a new trend” has emerged in recent months. People were now stealing animals to sell them for money, rather than in previous years where raids would occur to restock herds, he said.

“Between September and December, raids have increased from two or three a month to nine to 12 in different locations, not just in one location, mainly along the national borders,” he said.

A December bulletin issued by Kenya’s National Drought Management Authority warned that Turkana is among eight counties at the “alarm phase” of worsening drought. A forecast by Kenya’s Meteorological Department indicated Turkana among several counties experiencing below-average rainfall of less than 30-60 percent of the 40-year average in northern and eastern Kenya.

Unpredictable rainfalls are chief drivers of the conflict.

“Things have changed totally, so within the pastoral community, knowing when to be where, the formula is still not there,” said Dida. As people are forced to migrate to areas where they can find water and pasture, “those are the areas where a lot of attacks are as people struggle to share the same resources, especially with pastoralists from other countries”.

In September, Kenya’s government released two billion Kenyan shillings ($17.7m) under the National Drought Emergency Fund to respond to the ongoing drought situation in the country. But this has been slow to trickle down to the areas where it is needed most.

At the Turkana pastoralist Development Organization TUPADO, an non-governmental organsation working with pastoralists from Turkana and in neighbouring countries including South Sudan and Uganda, programme manager Sammy Ekal said a more robust government and humanitarian effort is urgently needed in severely drought-affected areas.

“The county government has no budget; as of now, they are not able to provide feed,” said Ekal, adding that the lack of rainfall since last year had prompted a “mass movement” of pastoralists from Turkana to the cross-border areas of Uganda, South Sudan and Ethiopia.

“In 2019, there were flash floods; after that, there was no rain and the drought is biting even now,” he said.

By January, Ekal fears there will be deaths. “That is what we need to prevent.”