Wajir county, Kenya – As if in a macabre parade, cattle carcasses line the two sides of the dusty road leading into Biyamadow, a sleepy village in northern Kenya’s Wajir county.

The grisly spectacle of dismembered animals rotting beneath the scorching sun is the result of a prolonged drought that has been pushing pastoral communities here – and the livestock they exclusively rely on – to the brink of disaster.

“In 72 years of life, I have never seen something like this,” said Ibrahim Adow, a Biyamadow resident. 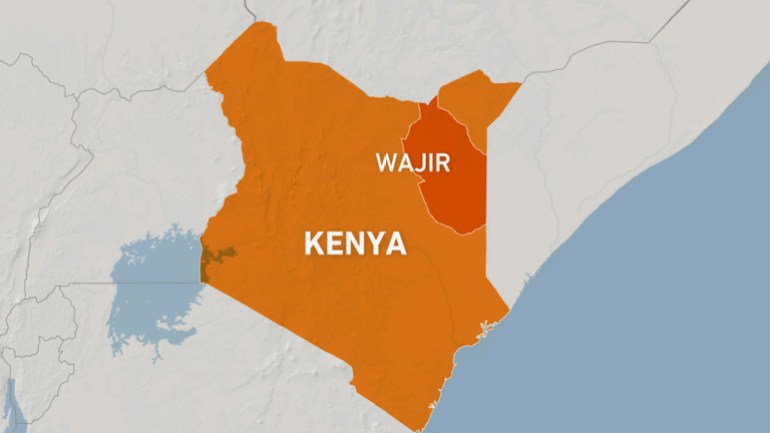 Since September, much of Kenya’s north has received less than 30 percent of normal rainfall – the worst short-rain season recorded in decades, according to the Famine Early Warning Systems Network. The lack of rainfall has wiped out pastures and exacerbated food and water shortages.

Adow himself has lost more than half his cattle. Those remaining are too weak to get milk from, too skinny to be sold.

“Nobody wants them,” said the village elder, scratching his orange-dyed beard with exasperation. In the past four months, Adow said, the price of one cow has dropped from about 40,000 Kenyan shillings ($357) to 5,000 KSH ($45).

It wasn’t always like this. While residents such as Adow are used to lean times when faced with the effects of droughts – when maize becomes their only meal, the distance to find water extends, their animals become so weak their bones poke from underneath their skin – they are also accustomed to the eventual return of rainfall and, along with it, greener pastures, healthier animals and fewer financial troubles.

But if no rainfall comes by the end of the year, as experts predict, it will be the third consecutive poor rain season since December 2020. That was when the current drought began, just three years after the previous one ended and much sooner than the more typical five to seven-year cycle – a period too short for pasture and water bodies to fully regenerate.

‘Only hope is for rain to come’

Last month, the United Nations said it expected about 2.4 million people across Kenya’s arid and semi-arid counties, including Wajir, to struggle to find food from November – up from 1.4 million in February.

One of them is Zenab Kule, a 25-year-old who is six months into her pregnancy. For the past four of these months, she has been feeding herself and her two sons – aged one and two – just with maize.

Both toddlers are suffering from diarrhoea, one of the most frequent symptoms of malnourishment among children below five. They also get sick easily, with Kule fearing her youngest is becoming too weak to recover from a flu. As for herself, unusual fatigue and accelerated heartbeat due to dehydration has made her daily life a struggle.

“The only hope I have left is for the rain to come,” she said.

More than 465,000 children and 93,000 pregnant and breastfeeding women, the two most vulnerable groups in times of droughts, are already acutely malnourished across northern Kenya.

Women are traditionally responsible for fetching water for the household, but the daily task can become an hours-long journey in the absence of rainfall, Wajir county Health Director Somow Dahir said. The NDMA estimates that the average distance to find water in October in the northern county was about 14km (8.7 miles).

Breastfeeding mothers’ prolonged time outside the household severely affects young children who consume less milk, especially when the family has lost its cattle to the drought. Also, a maize-only diet reduces milk production and makes it less nutritious.

“Cases of severe and moderate acute malnutrition [among pregnant, lactating women and children] are at the highest in three years – it’s a dire situation,” Dahir said, warning that if the drought persists, it will become “too costly” to reach the approximately 200 settlements in Wajir without health centres.

According to the World Meteorological Organization (WMO), 2020 ranked as the third-warmest year ever recorded in Africa. Estimates suggest the temperature could rise by up to 2.5C (4.5F) by 2050. Experts say that for every increment of global warming, changes in extreme weather events become larger. A warmer atmosphere can hold more moist air that can lead to extreme rainfall, but it can also result in more evaporation which brings more intense droughts.

The NDMA’s Oduor said, in northern Kenya, climate change is part of the problem, but other factors such as population growth, landscape modification due to agricultural irrigation and settlement expansions have also worsened the effect of droughts.

“In semi-arid regions, you used to have vast areas not occupied, where pastoral communities could move around – now that movement is curtailed and bigger communities are growing in smaller places,” he said.

The shortage of resources has a domino effect on local communities, leading to rising tensions over the control of grazing land, as well as higher prices and more students dropping out of school to follow their family’s cattle to more remote areas in search of water.

Oduor said there were no shortcuts when it came to dealing with the effects of droughts, but only long-term sustainable development projects, which can be expensive and time-consuming.

“Reversing a drought is almost impossible, but you can make people cope with it,” he said, citing the construction of additional water and health infrastructure, and investments into sustainable livelihoods to diversify families’ sources of income away from sole dependence on livestock.

“If enough had been done, we would not be suffering that much,” he said.

Back in Wajir, the looming question for residents is when the rains are going to fall next. “The outlook doesn’t look good,” said Gideon Galu, a field scientist and meteorologist with the Climate Hazards Center, who has extensively covered eastern Africa.

Climate conditions in the Indian and Pacific oceans – key factors in generating the rainfall season in East Africa – are not favourable, Galu explained. If such predictions materialise, the next rainy season from March to May will also fail, resulting in an “unprecedented” drought in terms of its extent and severity.

In the village of Benane, some half an hour from Biyamadow, Aden Gidhayes and his family already know what tomorrow’s food intake – both for the household and the livestock – is going to be: a ration of maize for the children in the morning, and one for the animals in the evening.

“If the rain doesn’t come, our animals will die, then we will all be dead,” said Gidhayes, raising his five fingers – the number of cows he has left.