Michael Katz was born in 1928. He grew up in Warsaw, Poland, before moving to the then-Polish city of Lemberg, which is now known as Lviv and is part of Ukraine, with his parents, Edward and Rita, in January 1940.

He recalls how his life changed in 1941, when the Nazis occupied Lemberg.

The first thing was that all Jews over the age of 12 were made to wear a Star of David on a white armband.

Then, in 1942, Jews were rounded up. Katz’s mother was taken to the Belzec extermination camp.

His father, who had moved to Lodz, was first forced to live in the Lodz ghetto, then the Warsaw ghetto. From there, he was sent to either the Majdanek or Treblinka extermination camp.

Katz was chosen to work in Janowska, a camp just outside Lemberg which began as a labour camp but later became an extermination camp.

By the end of the war, approximately 80 percent of the Jewish residents of Lemberg had been killed by the Nazis.

Katz, however, managed to escape by crawling under the barbed wire fence of Janowska and hiding in a cemetery before obtaining a fake ID with the help of non-Jewish friends. He made his way to Warsaw, where he participated in the Warsaw uprising in the summer of 1944.

In 1946, he reached the United States, where he went to university and eventually became a paediatrician.

On the 75th anniversary of VE Day, the day the Second World War ended in Europe, he spoke to Al Jazeera.

Al Jazeera: How did you survive the Holocaust?

Michael Katz: I don’t believe in luck. I believe in rational behaviour. I think the ability to make instantaneous judgements is key to being able to survive because people who hesitate, lose time. You don’t even go through the process of thinking, it’s such a subliminal activity.

In my profession, medicine, there are situations when the patient is in extreme danger and you have to make a quick decision which might mean the life or death of the patient.

Al Jazeera: What was your greatest fear during the war?

Katz: I made judgements about what would be less likely to get me into trouble and I happened to be right very often. I would be lying if I say I was not afraid of anything. I was desperately afraid in many situations.

I remember climbing up on the barricades in Warsaw and I was shot at. It was the first time I had ever been directly under fire and I was absolutely scared and yet I went on and did it. This was when I was in Warsaw during the Warsaw Uprising.

When I escaped from Janowska camp I had no time to even make calculations. But taking the risk of escaping was better than the alternative.

Al Jazeera: What was your role in the Warsaw Uprising?

Katz: I was a “runner”, meaning that I carried messages through the city, evading gunfire.

I was based in one place – on Plac Zbawiciela (a square in central Warsaw) – which was my position during the entire two months of the uprising.

But I also manned the barricade when I had no messages to carry and while doing this, I operated an automatic rifle.

Al Jazeera: Did you ever learn what happened to your parents?

Katz: More or less. I learned that my father had been moved to the Warsaw ghetto after the Lodz ghetto closed. At a date that is not certain, he was transported to either Majdanek or Treblinka, and killed there.

My mother and her parents were caught in the “Aktion” in Lemberg, on August 13, at about 9 am. I was able to see the documents in the Belzec camp, when I visited it about 10 years ago as a guest of the curator of the museum at Belzec. This was arranged with the help of the late Sir Martin Gilbert, a British historian, who became my friend.

Al Jazeera: How did you overcome the trauma you experienced and the loss of your parents?

Katz: One reason for my happiness is sitting on my right – my wife, Robin. Her presence in my life made an enormous difference. I got married when I was 58 and we have a 29-year-old son. And I was very busy and when you are busy it helps.

Al Jazeera: Do you think that the world has learned from the second world war?

Al Jazeera: What was the significance of VE Day for you in 1945?

Katz: I think it was very significant; think of the photos of the then open concentration camps. The feeling of relief was incredible!

However, this is slightly imprecise, because for me that happened with the disappearance of the Germans several months earlier.

Al Jazeera: What is the best way to fight dangerous forms of nationalism?

Katz: I am a member of the committee of human rights of the National Academies of Medicine. There are issues we should be considering because COVID-19 causes some strong negative reactions [like a rise in nationalism]. But if Donald Trump would read Mein Kampf he would see that he is following the pattern.

Al Jazeera: Do you think sufficient reparations have been paid to survivors of the Holocaust?

Katz: The German government offered money to people like me, but I refused to accept that. There was no way they could make it good again, which is what the German term for reparations, wiedergutmachung, means.

What they committed was irreparable and there was no way I would accept that. I would be ashamed to accept that. If it was compensation for material loss, that is different and I might accept that. But not for pain, for what was done to me. The value of my feelings in unassessable.

The interview was edited for brevity and clarity. 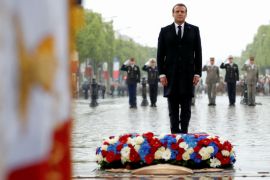 French police gear up for protesters as Europe commemorates the anniversary of Nazi Germany’s surrender.