New York City, United States – Willie Richardson stands on the top of his building’s crumbling steps, shaking his head. He is one of dozens of property owners who recently triumphed in a lawsuit against New York City when its government attempted to foreclose on six financially troubled apartment buildings.

Richardson owns shares in a city-sponsored housing cooperative, and the story of how he got those shares and why he may still lose them is part of the herculean struggle to preserve affordable housing in one of the world’s most expensive cities, where an apartment in the most affluent borough – Manhattan – costs a median $1m.

A county judge recently issued a blistering condemnation of New York City’s attempt to seize the building where Richardson lives (in Brooklyn, the borough southeast of Manhattan) along with five other buildings in that area and turn them over to a publicly appointed property-management company.

Apartments like Richardson’s home, which is in the rapidly gentrifying Clinton Hill neighbourhood, are attractive to management companies and other real-estate developers because they are often valued at hundreds of thousands of dollars or more depending on the size, location and financial health of the cooperative – or co-op – to which they belong.

Holding onto New York City co-ops – or losing them – can make or break the financial health of low-income people who face the threat that the city government will take these buildings away and sell them to investors. With New York’s average home costing $677,000 and its average monthly rent totalling $3,519, people in the greater metropolitan area devote an average 36 percent of their incomes to housing. That’s 17 percent above the US national norm. But among most low-income renters, reports the Community Service Society, housing eats up more than half of income – 50 percent above the national average.

Richardson’s low-income co-op in a Housing Development Fund Corporation (HDFC) building is among hundreds of thousands of such co-ops that New York City’s government established in the financially beleaguered 1970s and 1980s, when the city’s population was shrinking because crime and economic stress were driving thousands of middle-income people to leave.

At the time of their creation, city-sponsored low-income co-ops – also known as HDFCs – were seen as a way to assist people like Richardson while simultaneously saving buildings from landlords who had abandoned them rather than pay back taxes, unpaid water bills and other arrears.

New York City helped people living in neglected buildings form co-op corporations, then sold the buildings to these residents at prices as low as $250 per apartment. As part of the deal, co-op members were required to manage the buildings themselves.

Attaining these properties gave middle- and working-class New Yorkers like Richardson a chance to become homeowners. And in a city where the majority of people are renters, that simple change in status not only stabilised housing costs for less-affluent New Yorkers, but also allowed them to build wealth.

HDFC co-op units have been known to trade hands for $500,000 or more – despite the fact that their government-subsidised nature reduces the speed at which their values grow because the city sometimes takes a 30 to 50 percent cut of the profit from resales of such apartments.

All told, the return on these investments can be more than two hundred thousand percent.

A market niche under fire

If they can write down debt for developers, why can't they do it with individual properties so they can save their housing and save those homes?

Though they may be valuable real estate, not all of New York City’s HDFC co-ops are well-managed. And as was the case in the 1970s and 80s, some have amassed hundreds of thousands of dollars in unpaid bills – prompting the city to take steps like its recent attempt to foreclose on Richardson’s building and other Brooklyn properties.

“If they can write down debt for developers, why can’t they do it with individual properties so they can save their housing and save those homes?” asked housing advocate and West Harlem resident April Tyler when asked about these court cases. “They’re gentrifying – and creating unaffordable housing.”

In a strongly-worded ruling against New York City in March, Judge Mark Partnow of the Kings County Supreme Court seemed to side with Tyler and other housing advocates. In his ruling, Partnow called the city’s use of its power to foreclose on the Brooklyn buildings “overly broad and improper” and a “grave injustice”.

On April 24, lawyers for the city appealed the ruling, saying property owners had ample notice about the problems that prompted the building seizures and arguing that the properties in question “need not be ‘distressed’ according to statutory definition”. The city’s attorneys maintained that the city’s actions didn’t constitute a taking of property without just compensation because co-op owners had long warning periods.

Choked by the hand that fed them

We see this as a major land grab. Who wins? The developers.

Decades ago, in an effort to help low-income New Yorkers like Richardson, New York City’s HPD department launched its Third Party Transfer (TPT) programme – an initiative designed to take buildings away from negligent landlords and stabilise properties for residents.

Today, the city argues that because of massive unpaid taxes and water debts, it is low- income owners themselves who are now negligent and need to have their properties transferred out of their hands. 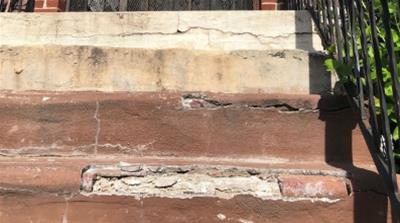 The building where Richardson lives not only has massive unpaid bills, but is also in disrepair, as evidenced by its front steps [Will Swarts/Al Jazeera]

HDFC residents who face this threat – and who are now battling it in court and fear they might be rendered homeless – say they’ve rarely been notified about problems in their buildings such as unpaid taxes and code violations in time to respond quickly enough to these charges.

Many also say they were never given sufficient training and support to navigate the complex bureaucracy created around these properties. This, they claim, leaves their homes vulnerable to foreclosure and control by city-appointed landlords at a time when New York real estate is not only scarce, but stratospherically costly.

Critics say the TPT programme designed to empower low-income people is now stripping decades of accrued equity and wealth from the very New Yorkers it was designed to help: women, the elderly, and people of colour who likely would not otherwise be able to afford New York City housing.

“We see this as a major land grab,” said Tyler. “Who wins? The developers.”

Developers and investors could potentially take possession of 37 HDFC co-ops that are still in foreclosure in the wake of the Brooklyn ruling. At an average of more than 20 homes per property, that represents a total 802 households under threat, reports the HDFC Coalition, a nonprofit organisation comprised of HDFC co-op shareholders.

Since its 1996 creation, the TPT programme has generated ten rounds of foreclosure actions. Between 1999 and 2016, the city foreclosed on 96 HDFC properties. And in 2017, a total of 84 properties were seized.

The actual number of New Yorkers who have lost the titles to their homes due to TPT may be much higher than the official data shows because – as Creegan explains – the agency’s latest round of foreclosures began in 2015 “and it is a three-year process”.

Though only 60 HDFC properties faced foreclosure in 2018, as many as 400 of them are in financially vulnerable shape, according to Tyler, who is a member of the HDFC Coalition Steering Committee.

This programme, which was supposed to be used to help preserve affordable housing, has been a subterfuge to remove properties from homeowners who had their properties in some cases for more than 30 years.

When properties are seized by New York’s HPD department, they are turned over to approved developers who are charged with rehabilitating them. Real-estate investors can buy these properties for $1, plus added costs of $8,750 per unit, and use low-interest loans to improve the buildings.

Shareholders, though, are out of luck. Even though they may not be evicted (they are generally allowed to rent the homes they once owned), their equity is gone, with decades of accrued wealth wiped out.

“With these foreclosures, residents will lose their equity in their apartments and their buildings and then get hit with huge rent increases that are unaffordable. It’s changing whole neighborhoods,” Tyler says.

Third-party transfers of foreclosed properties are now drawing so much fire that even local politicians are joining the chorus against them. Several New York City Council members representing neighborhoods with a high portion of HDFC properties are criticising TPTs.

“This programme, which was supposed to be used to help preserve affordable housing, has been a subterfuge to remove properties from homeowners who had their properties in some cases for more than 30 years,” said Brooklyn Borough President Eric Adams at a press conference following the recent court ruling.

A few victories, but the war goes on

In addition to the six properties affected by the recent Brooklyn decision, a total of 12 foreclosures were overturned by New York’s City Council at the end of 2018.

At the time of greatest economic inequality, they are targeting a population of mostly female-headed households and senior citizens

Glory Ann Hussey Kirstein, a member of the HDFC Coalition’s Steering and Anti-Foreclosure Committees, says the city wants to appeal the recent ruling because its underlying motive is to help developers while it claims to promote affordable housing.

“At the time of greatest economic inequality, they are targeting a population of mostly female-headed households and senior citizens,” Kirstein told Al Jazeera. “I hope they lose.”

Lawyer Rodney Austin, who represented one of the Brooklyn property owners in court recently, said he was struck by HPD’s intransigence in the case.

“They were rigid in terms of trying to make a settlement, and the city went above and beyond in trying to recover this property,” he said. “I can’t see them making any argument that’s going to overcome what Judge Partnow ruled, though.”

One thing is clear: When the Brooklyn case goes to appeal, it will plunge Richardson and other homeowners into uncertainty again. Some shareholders say they don’t care why this is happening, they would just like the process to end.

“It’s hard,” says a white-haired Richardson, looking out the building’s front door and shaking his head once again.

This article is part of AJ Impact’s ongoing series about housing and its many complex business, technological, and political dimensions. A global demographic shift is taking place as enormous numbers of people migrate to urban centers looking for places to live and work.  Click here to read past articles about housing in Lagos, Nigeria or Chicago, US.