Iquitos, Peru – Late afternoon is the busiest time in the muddy harbour of Iquitos in the Amazon basin, in the northeast of Peru. Men haul stacks of bottled soda and kilos of rice on their backs, motorcycle taxis load passengers and their luggage, and an old man strolls around selling hammocks, which boat passengers use to sleep in.

Travelling by cargo boat is the most economical way to move around the Amazon region. The boats travel along rivers lined with communities.

Iquitos is a city of almost half a million inhabitants that flourished during the rubber boom of the late 19th century.

But today, parts of the historical centre are abandoned: buildings have collapsed, leaving only their facades, while the land is slowly being reclaimed by the jungle. Many of the older buildings that remain intact have been turned into casinos or supermarkets.

The city has been expanding with little planning. Houses on stilts with corrugated iron roofs cluster on the bank of the Amazon in front of the main tourist boulevard, the Malecon Tarapaca.

Yet, Iquitos is the main transport hub of the jungle, from here people and goods travel to communities along the river banks in the Amazon forests. It takes nine days of travel upstream on the Maranon River to get to the nearest town of Saramiriza, from where the road network to the rest of Peru starts.

During his campaign in 2016, President Pedro Pablo Kuczynski promised to connect Iquitos to Saramiriza by road to boost economic development. He has promised to finish the project before he leaves office in 2021.

Many residents of the region support the president’s plan.

“They should construct this road as quickly as possible,” says Rosa Samara, who lives in Barranca, a community four days by boat from Iquitos.

Samara, 61, came to Iquitos to visit her parents and now lies in her hammock waiting for the boat to leave. “We will save so much time travelling and be able to sell our products more quickly. I actually voted for the current government because they promised to build this road.”

With only one asphalted road connecting Iquitos to Nauta, a smaller town 92km to the south, the Loreto region, of which Iquitos is the capital, is the most underdeveloped in Peru.

Vegetables like lettuce, tomato and cucumber don’t grow easily in the sandy soil of the jungle. So, they are imported from the western coast, which increases the price of the produce.

Fresh fragile jungle fruits such as camu camu or acai can’t be exported using the slow cargo boats because they do not have electrically driven coolers to keep produce fresh.

Traveller Carlo Yumbato Delaira, who used to live in the city of San Lorenzo along the river bank but moved to Iquitos to find economic opportunities, is on a trip to visit his family.

“San Lorenzo produces everything: meat, fish, cassava. But they simply can’t export it. That’s the problem,” the 47-year-old says.

“Of course there will be an environmental impact when they construct the road, but the people are desperate. There is so much unemployment. New laws prohibit people [from making] a living from logging, but there is nowhere else to turn to.”

Carlos Gregory Garcia Wong, an engineer working on the project, shows a map of Loreto with the future road connections illustrated. Besides the planned road of 700km to Saramiriza, there is a line drawn northwards to Colombia and one going east towards Brazil.

“In Loreto, the people believed a road connection was a fantasy because the main roads through the jungle were always rivers,” Garcia, who works for the regional transport and communications office, says.

He thinks the project may take longer than the scheduled time.

“There are a lot of difficulties when constructing roads through the Amazon jungle: We have to cross rivers and swampy parts, work around nature reserves,” the 31-year-old engineer explains.

“The preliminary studies will already cost three years and we are only just starting with these, so the road will not be finished before 2021.”

Critics fear the project may be detrimental to the local environment. They point to a road that was built in another jungle in southern Peru as an example of the potential environmental costs. Built in 2011, that road project, called the Interoceanic Highway, opened access to the Madre de Dios jungle for outsiders.

According to Manuel Delgado, a veterinarian and environmentalist in Madre de Dios, the road attracted immigrants from the Andes mountains.

“These migrants bring their farming methods into the jungle because they work fine for them in the mineral rich soil of the Andes,” Delgado explains. “This results in the quick depletion of the soil, because, compared to the volcanic Andes soil, the sandy underground of the Amazon is poor in minerals.”

Luis Campos Baca, president of the Peruvian Amazon Investigation Institute, a government body based in Iquitos, says his institute is researching the many opportunities for sustainable agriculture of jungle fruits in the region.

Giving the forest such an economic value offers indigenous people an incentive to protect it against logging and other invasions.

Campos adds that such projects should be stimulated first, after which a road will be the lifeline that brings the fruits to the market.

Sitting on a terrace outside his office, Campos explains how the Interoceanic Highway, which was meant to connect Brazil with the Peruvian port cities, gave loggers and farmers an unintended entry into pristine jungle areas.

“What went wrong with the Interoceanic Highway is that it was rushed through. It was an Odebrecht-project, so there was corruption involved,” he says referring to the Brazilian construction firm behind the project, which was at the centre of a bribery case.

“The governments at that time didn’t care too much about environmental assessments. Now, we will take our time and investigate first.”

President Kuczynski has said he knows there are environmental concerns over the road project, but he believes strong enforcement of environmental laws will mitigate any environmental damage.

But Murilo Reis, who owns a private reserve some 400km outside of Iquitos, isn’t reassured. He says existing water transport infrastructure should be further developed.

“The impact on the jungle will be one of destruction, with people having another access to pristine areas. Socially there will also be a negative impact: People currently living along the river, will lose a lot of commercial activity. They will have to move to the road.”

Reis, a Brazilian-born nature guide, says that in 1976, Brazil built a similar road through the jungle, from Porto Velho to the city of Manaus, which like Iquitos, had flourished during the rubber boom.

But even using improved cargo ships, the trip would still be a long journey. Taking off from the harbour, the cargo boats slowly move upstream, stopping at small jungle towns along the banks. Loading and unloading take hours because they’re done with rusty manual cranes.

Most of the people do hope a road will be built in the near future. Travellers on the deck of the boat dream that one day their trip will be counted in hours instead of days.

Despite the environmental impact a road might have, the passengers say their region has to be developed. Samara, the woman travelling to Barranca, says there is always a price tag to development.

“Everything we humans do has a risk. Only God knows what will really happen,” she says.

But the owner of the cargo boat, 49-year-old Cesar Paladines, sitting at his desk while his employees walk back and forth loading stock, says he doesn’t believe there will ever be a highway.

He explains that there has been talk about this road connection for years, and before that there was talk about a train track – a project which never started, despite the expensive studies conducted.

“Connecting Iquitos to Nauta already took so many years to realise, and that was just a 90km stretch,” Paladines says with a sigh. “This is all a beautiful dream, but it will never happen.” 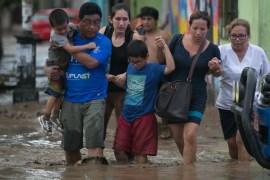 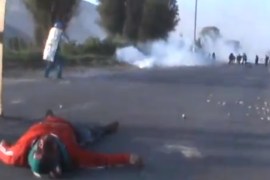 Peru declares state of emergency over mine protests