San Jose Calderas, Guatemala – “We weren’t criminals,” says Florencio Hernandez, 55, seated on the patio of his simple home in San Jose Calderas, in Chimaltenango province, Guatemala. “We didn’t go to the United States to rob anyone. We were working.”

Hernandez migrated from this village in the Guatemalan highlands to Postville, Iowa, in 2004, and began working at Agriprocessors Inc – a kosher meat-packing plant. Three of his sons also came to the US as undocumented immigrants and began working at ‘La Agri’, as the workers called it.

On May 12, 2008, US Immigration and Customs Enforcement (ICE) raided Agriprocessors Inc and arrested 389 workers; 290 of the detainees were Guatemalan, and 127 were from San Jose Calderas. It was the largest workplace immigration raid in history.

Sitting next to his wood-fired stove on the patio, as his two young granddaughters look on, Hernandez recalls the raid. “It was a terrible day. They treated us like animals,” he says. “They didn’t let us sleep for two nights. The food was awful, everything about it was awful.”

READ MORE: Guatemala – The indigenous population too poor to stay

After six months in federal prison, more than 100 people were deported to San Jose Calderas, a farming village of 3,000 people in the shadow of the Acatenango volcano. Hernandez and his three sons were among the deportees.

Today Hernandez serves as president of the Association for the Betterment of Deportees, known by its Spanish acronym Aprode. The association employees 35 residents of San Jose Calderas, more than 20 of them deportees, to work as guides on the Acatenango volcano.

“We don’t want to go back to the United States,” Hernandez says. “We want to stay here, and the volcano is the means we have to make a living.”

From migrants, to deportees, to guides

In a span of 20 years, the residents of San Jose Calderas have gone from farmers, to migrants, to deportees. Today, thanks to the work of Aprode, they are volcano guides for tourists from around the world.

With Donald Trump‘s presidency, the need for local employment has become more urgent. In the first three months of 2017, some 8,346 Guatemalans were deported from the US, a 14 percent increase from the same period the previous year.

Workplace raids like the one in Postville were not a priority during Barack Obama’s presidency, but they may be on the rise under Trump. Under Trump, ICE appears to be reverting to more “targeted enforcement” detentions, in which immigrants are picked up in their communities.

Down the road from Hernandez’s home, Ovidio Soy Sologui, Aprode’s secretary, recounts how a small town of Mayan farmers in Guatemala’s highlands became linked to Postville, Iowa – a dot on the map in the Midwestern prairie.

“In 1999, a few men from our town arrived in Postville, and they saw there was a lot of work available,” he explains, sitting at his kitchen table. Agriprocessors Inc began hiring the Guatemalans in droves.

At the peak of Guatemalan migration to Postville, he says there were 1,000 Guatemalans in the town of less than 3,000 people. Almost all of them were from San Jose Calderas and the neighbouring villages.

Soy Sologui paid a “coyote” – a people smuggler – to bring him and his eldest son to Postville in 2004. He worked for two and a half years at “La Agri” and in 2007 returned to Guatemala voluntarily.

Postville changed with the influx of Latin American immigrants. A Mexican restaurant opened, and the immigrants formed their own football league. In turn, San Jose Calderas changed with the flow of US dollars sent as remittances.

Before villagers started migrating to the US, the houses in San Jose Calderas were built from sugar cane branches and palm fronds. Family members working in the US sent back money to build cinder block houses, and the first two-storey homes went up around town.

Elvin Soy Lopez, Ovidio’s 25-year-old-son, remembers the boom years while his father was working in Postville.

“All of the stores around town were always fully stocked. The community meetings were all women, because the men were in the US,” he says.

Ovidio sent home enough money for the education of his six children, and to build a cinder block house. He also bought land to extend his agricultural parcels.

“This is another product of my time in the US,” he says, looking out at the uniform rows of corn, already a foot high after planting in March.

Standing in one of his parcels, on the slope of a mountain bordering San Jose Calderas, he points out the staple crops that make up the Mayan crop-growing system known as milpa: corn, squash and beans. His wife Rosa Lopez accompanies him to the plot each morning to tend to the crops, which provide for the tortillas and beans that are perpetually heating on their wood-burning stove.

Ovidio and Rosa used to walk more than an hour from their home to the milpa each day. A year ago, their son who still works in Iowa bought them a compact four-wheel-drive vehicle, which they now use to drive up to the fields, carrying organic fertiliser and water. Most residents of San Jose Calderas walk or cycle around town, or rely on the chicken buses that hurtle down the highway every 20 to 30 minutes to go further afield.

“For me, going to the United States was a blessing,” says Soy Sologui. “But for others, it was a curse.”

To reach Iowa, the residents of San Jose Calderas had to take out loans of thousands of dollars to pay “coyotes”. The migrants had to work off the loans during their first years in Postville.

Aprode was formed shortly after the Postville deportees returned to San Jose Calderas. The association sought to start a chicken hatchery or meat processing plant to use the skills they had acquired in Postville. However, they struggled to finance the project and the organisation stalled. Most of the deportees returned to eking out a livelihood from agriculture, and others tried to return to the US.

In 2015, Soy Sologui and Hernandez decided to re-invigorate Aprode. Ovidio’s son Elvin was studying for a tourism degree, and he helped them strategise how to become guides on the nearby volcano, Acatenango.

They contacted the National Commission for Attention to Migrants (Conamigua), which helped pay the Guatemalan Tourism Institute (Inguat) to provide a tour-guide certification course in San Jose Calderas. Tour companies in the city of Antigua, Guatemala, began sending groups to Aprode.

Today, 35 members of Aprode rotate leading tours on Acatenango. In addition to receiving groups from tour companies, Aprode offers private tours that are scheduled via Facebook or Whatsapp.

The Aprode guides make 200 quetzales ($27) for each tour they lead through the tour companies, and more for private tours. This is four times the daily pay for farm work in the area, making the volcano guides the best paid job in town.

It’s gruelling work. At 9:30am Elvin leads a private tour group hiking up the volcano. They set out from roughly 2,400 metres above sea level, and by 3pm have reached the base camp. They camp overlooking the “Fire Volcano”, Volcan de Fuego, in front of Acatenango. Its periodic eruptions entertain campers with views of billowing volcanic dust and incandescent magma flows.

At 4am the tour group heads for Acatenango’s summit to catch the 6am sunrise. The summit is at 3,976 metres, and Elvin estimates it is minus 3C that day.

The tourists shiver through the final minutes before sunrise. As the sun peeks over the clouds, they take photographs. Elvin does not bother to photograph the view, which he has seen hundreds of times before.

On January 7, a group of Guatemalan tourists climbed the volcano without a guide, and was caught by a sudden drop in temperature and high winds at the summit. Six of them died from hypothermia.

“Anyone who wants to climb Acatenango should hire a good guide,” Elvin says soberly. “I have been climbing this volcano since I was a kid, and I have seen it in all kinds of conditions.”

As migration to the US becomes even further out of reach for Guatemalans, Aprode is providing new opportunities for deportees, and their children’s generation.

Elvin explains that his father at one point contemplated bringing him to the US, while he was still in high school. But Elvin stayed in Guatemala, and today is a certified tour guide working with visitors from countries such as Austria, Spain, Mexico, and Britain.

“I have been in the association for a year,” Jose Alejandro, a 19-year-old guide with Aprode, says. “And I want to work hard at this so we don’t have to migrate.”

Remittances from the US remain an important source of income in Guatemalan communities like San Jose Calderas. Since Trump took office, migrants are sending more money home, in case they are deported. In March 2017, the Bank of Guatemala recorded the highest ever monthly total of remittances, $739m.

The services provided by Conamigua, the commission that serves Guatemalan migrants, are more in demand than ever, but since February the commission has not had an acting director. Conamigua declined a request for an interview from Al Jazeera.

This means that Aprode and other deportees are left on their own to rebuild their lives in Guatemala. The trails on Acatenango are built by the local guides, and investment from the national tourism board, Inguat, is notably absent.

Aprode dedicates a portion of their income to community projects. They paved one of the town’s main roads. Their next project is to work on the water infrastructure in town, since every few days the water runs out. They plan to introduce “agro-tourism”, where tourists stay with local families and learn about sustainable agriculture.

These new initiatives would involve more women in the organisation. Numerous women were also deported from Postville, but do not participate directly in Aprode.

Rosa Lopez, Ovidio’s wife, prepares food for hikers and opens her home to provide overnight accommodation. Both Ovidio and Rosa only had a few years of formal education, but schedule tours and manage Aprode’s finances.

Throughout the year, guides have to supplement their income from the tours by working in agriculture or construction. When the rainy season starts in May, the number of tourists decreases.

A handful of the guides speak English, which they learned while working in the US. Aprode hopes to provide English classes to the rest of the guides, to accommodate more tour groups. If more members were fluent in English, Aprode could operate as an independent tour company, instead of relying on companies in Antigua. While the guides work long days in strenuous conditions, the tour company pockets most of the price tourists pay.

“We’re not seeking a handout from anybody,” Soy Sologui says emphatically. “We’re farmers. We have always known how to provide for ourselves. We just want to have a chance to provide for the next generation.” 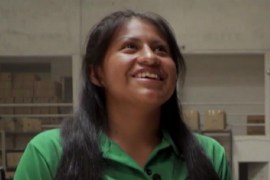 Why is Guatemala one of the world’s happiest countries?

Despite high rates of violence and poverty, Guatemala is consistently in the top 10 of happiest countries globally. 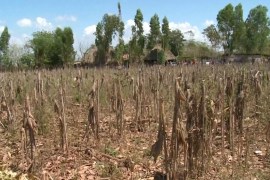 Ever since 2012, the rains have been weak and insufficient.