On the satirical news show Mideast Minute, Jamsheed al-Jamsheedi is a host who specialises in telling brazen lies. The man who created the show and stars as al-Jamsheedi is the award-winning filmmaker and comedian Pardis Parker.

Parker, Sri Lankan-born and Canadian-reared, has his tongue firmly in cheek as he tries to convince a hypothetical Middle Eastern audience that immigration to the United States is overrated, that US president Donald Trump’s son-in-law, Jared Kushner, is actually qualified to broker peace between Israel and Palestine and that Middle Easterners shouldn’t bother boosting the price of crude oil because, frankly, who needs it anyway?

Mideast Minute’s first iteration was as a webseries in 2007, but Parker, who lives and works in the US, tells Al Jazeera that he chose to revive the show, which launched in January, for Comedy Central because it was just such a perfect fit for 2017: “Just look at today’s political discourse. At every headline. There’s a propaganda machine in place that’s targeting Americans and foreigners alike, and even if it’s not new, I don’t think it’s ever been this shameless.”

Parker speaks to Al Jazeera about the comedic potential of propaganda, whether comedy can be deployed as a political weapon against Donald Trump, whether he considers what he does to be journalism, and how his own history as an immigrant shapes his work and his life.

Al Jazeera: Mideast Minute is billed as satirising the US’s foreign propaganda efforts, taking aim at shows like those on the US Congress-funded Alhurra network. What is it about this media and political landscape that makes it such a good source of comedy for you?

Pardis Parker: The deception of it. The bald-faced lie. That’s something I’ve always been drawn to in film and TV. There’s no greater tension, I don’t think, than that of a character who’s on the precipice of being exposed as a liar or cheat.

Again and again, when we turned on the news, we’d see a government official look us straight in the eye and lie. And I wanted to take that further.

Parker: It feels like government officials and certain media outlets are becoming increasingly brazen with their falsehoods, and ultimately that’s what this character wants to be.

In previous iterations he was more of an out-of-his-depth buffoon, someone grossly unqualified for the job he was tasked with, and that version was inspired heavily by Peter Keleghan’s character from a mid-90s Canadian sitcom about a local news team. He was a complete airhead. A pompous egomaniac. But there’s less of that, now. Now the focus is more and more on the brazen lie and on trying – and often failing – to get away with it. And the inspiration, honestly, shows up every night at 6pm.

Al Jazeera: A slew of late-night shows featuring the likes of Stephen Colbert, John Oliver and Samantha Bee comfortably bestride the worlds of journalism, comedy and political commentary. You also refer to news sources in your show, but would you consider what you do a form of journalism? When fake news is making headlines, how does a satirical show distinguish itself?

Parker: Our second episode was about Jared Kushner, and we had well-informed friends say they’d never heard the details we shared in that episode about Kushner’s past, and that it was their favourite episode at least in part because of the information we’d dug up.

So, no, I don’t think what we’re doing is journalism, but I think in the satirical news space the shows people are enjoying more than others are the ones like John Oliver’s, that have, if not a journalistic component, then at least an informational one – where they unearth new facts and footage to serve as the foundation for the jokes they’re telling and positions they’re taking. It strengthens the comedy, and can serve as a springboard to not just laughter, but the shock, surprise, and disgust that oftentimes come with it.

Now, to be clear, we’re nowhere near as good as the shows you listed, but I think the best version of our show lies in episodes like the Kushner one, where deeper research leads to better joke-writing.

Al Jazeera: For comedians, the Donald Trump presidency has been a gift that will not stop giving. Aziz Ansari, Bill Burr and Melissa McCarthy are among the many who have taken on the Trump government. But it’s not all just for laughs. Filmmaker Michael Moore called on his fans to “form an army of comedy that will bring him [Trump] down”. Is this idea – comedy as a form of political activism – one that resonates with you at all?

Parker: I grew up in a family that believed the divisive nature of partisan politics was detrimental to our communities, and that’s a belief I still hold today.

So my hope is that the show and my involvement in it, though it looks and feels like political comedy, isn’t seen as contributing to the conflicts already resulting from America’s affliction with partisanship. But just because I’m fundamentally non-partisan in my perspective doesn’t mean I’m blind to injustice, or that I’m unwilling to shine a light on the areas our country would do well to improve in. And one such area is the honesty and transparency exhibited by government officials in their communications with us and with others.

I think we have a fair and rational expectation to their honesty, that it’s something we have the right to expect from all government employees, and I believe it’s perfectly reasonable to use the arts, and comedy in particular, to take a non-partisan, non-violent, and peaceful approach to winning the affirmation of that right.

I don’t know what effect the show will ultimately have, if any, and my objective certainly isn’t to bring anyone down. But satirising propaganda is a type of comedy I enjoy, and I’d be delighted if it had value beyond mere entertainment.

IN PICTURES: The scars of Sri Lanka’s civil war

Al Jazeera: On a personal note, your degree was in computer science and psychology; you later travelled widely and eventually went on to run a health food store. How did you go from there to stand-up comedy? When did you know you had made the right choice in switching careers?

Parker: I made the mistake of thinking and acting pragmatically when I was younger, instead of just following my heart. From a very young age I had a love for comedy and TV shows and movies. I used to record Just for Laughs stand-up clips on to VHS tapes when I was in grade school and force my teachers to show them to the class. I could never get enough of the 80s sitcoms and action shows I grew up with. Or the action movies my friend’s father would illegally record from the movie channel and we’d watch one after another after another when I’d visit.

So if you actually looked at how I spent my time as a kid, you’d realise that my whole upbringing was preparation and research for two things: one, how to record TV shows and movies to VHS for later viewing, and two, how to tell stories visually and comedically. And at some point I just reached a psychological impasse – I couldn’t continue being pragmatic any more. Couldn’t ignore my desire to make stuff and make people laugh. So I tried it. And I liked it. And I still don’t know if I made the right choice – I have no idea what my life would’ve been if I hadn’t made the switch – but I do know I love my life as it is and couldn’t be happier with how I spend time to earn a living.

Al Jazeera: You are the first Sri Lankan-born actor/comedian to create and star in your own project for a US network. How has your mixed heritage, and your family’s history as immigrants, influenced your art?

Parker: Not just my art – it’s informed my whole worldview. My family sought asylum in Canada, which was kind as a country to take us in, but the place we moved to was a sea of white. For years, we were the only family with pigment in our whole neighbourhood. The only family that didn’t reflect light. The only family who knew of a spice beyond pepper. And regardless of how kind-hearted and welcoming and tolerant Canadians were – which they overwhelmingly were – the fact of the matter was that we still stood out. Even if we barbecued like them and went sledding like them and played in minor soccer leagues like them, we were still the “other”. So I grew up an outsider. And that was my truth. Never quite fitting in. Not with the white kids for whom I was a foreigner, nor with the brown kids who felt like foreigners to me.

And so the result, I think, is that the content I now consume and wish to create revolves primarily around three things. First, acceptance of the other; second, triumph of the underdog; and third, friendship and family. Squint at it from just the right angle and I guess you could say that Mideast Minute addresses the second – it’s about speaking truth to power, and making the voiceless masses feel as if they’re not alone – as if there are others like them who perceive the same absurdity they do, and who are willing to point a big flashing arrow at it. But those three themes – acceptance, triumph, and family – are ones I’ve subconsciously explored even going back to my first film, Afghan, and I imagine they’ll be themes I continue to explore in the future. 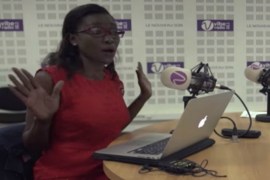 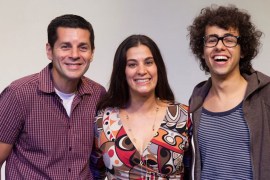 After struggling to find a venue for its first performance in 2003, group now headlines New York’s top comedy clubs.