Machine guns, anti-aircraft missiles and RPGs – all weapons ready to be used on the battlefield.

But in northern Sudan, they are deployed to turn away migrants and their smugglers trying to cross the vast desert to reach Europe.

Those using this weaponry are members of a Sudanese paramilitary unit, the Rapid Support Forces (RSF).

Established in 2013 to fight a rebellion in Sudan’s Darfur region, the RSF was originally part of border intelligence.

“Once we dealt with the rebellion in South Kordofan and Blue Nile and Darfur, we immediately turned to the great Sahara desert, especially after the directives from the president of the republic to combat illegal migration,” Mohamed Hamdan, head of RSF, told Al Jazeera.

Previously known as Janjaweed, or government-backed militias, the RSF’s approach of dealing with migrants has been largely criticised.

While fighting the rebels in Darfur, the group was known for its brutality, and was accused by Human Rights Watch of inflicting “a campaign of forcible displacement, murder, pillage and rape on hundreds of thousands of civilians”.

When Sudan and other African countries signed a deal with the European Union (EU) on migration, known as the “Khartoum Process”, the RSF started deterring Somalis, Eritreans and Ethiopians, as well as other nationalities, from crossing the Sudanese border.

Often, the process ends with death.

In September, the RSF announced that it killed 28 people smugglers in clashes along the Sudanese-Libyan border. The RSF has refused to state how many migrants were killed in the clashes, if any.

“The process of stopping the migrants and getting those who work in smuggling them happens in areas that are poorly developed,” Abdelmoneim Abu Idrees, a Sudanese analyst, told Al Jazeera.

“In those areas, it’s hard to observe what these forces are doing, especially with no organisations specialised on human rights close by.

“And even the media, they are not called until the migrants are brought close to the capital [Khartoum] and the media are told that they (the migrants) have been ‘rescued’.”

Other times, deterring migrants ends with them placed in detention centres in the eastern part of the country.

Sometimes, the migrants are returned to their country of origin, as it happened in May 2016, when more than 1,000 Eritreans rounded up in Khartoum and the Sudanese-Libyan border were forced back to Eritrea.

Similarly, more than 100 were sent back in August and September 2017.

According to the UN’s refugee agency, “the forcible return of refugees to their country of origin is a serious violation of international refugee law”.

Refugees escaping Eritrea are mostly fleeing the country’s mandatory military service, which officially takes up to two years to complete, but is often extended by the government

“I don’t want to go back,” Enok Debesgne, an Eritrean migrant told Al Jazeera in a camp in Kassala, eastern Sudan.

Debesgne said his father is in prison and he left his five siblings behind with his mother to find a better life outside Africa.

“I want education. So I’ll stay until I get any help or advice from any person who helps others. Then I will be able to go further.”

In early 2017, the Sudanese parliament approved a bill recognising the RSF as special forces. They are supposed to report directly to President Omar al-Bashir, who is wanted by the International Criminal Court on charges of genocide and war crimes committed in Darfur.

“But the main question is, with these forces, can anyone control its dealings with civilians?”

But it’s not just the RSF that has come under criticism – the EU has also come under fire.

“The EU has to face it,” Abu Idrees said. “When it comes to the issue of migration, it’s dealing with a force that is controversial to achieve what it wants.”

So far, the EU has given more than $250m after signing cooperation agreements with Sudan to combat migration.

The bloc insists that they do not give the funds directly to Sudan’s government, and that all EU-funded activities are “implemented by agencies of EU member states, international organisations, private sector entities and NGOs”.

However, human rights and monitoring groups have raised suspicions that the EU has no role in supporting the RSF, even if indirectly.

The RSF, meanwhile, has not denied receiving support from the EU.

“They (the EU) lose millions in fighting migration, that’s why they have to support us,” Hamdan, the RSF head, said.

“Some representatives have come with us to the desert to witness our operations and offered trainings,” he added, refusing, however, to disclose their nationalities. 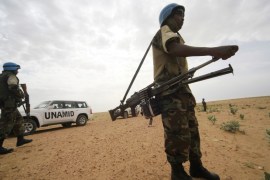 Sudan clashes kill up to 10 in Darfur: tribal chiefs

Clashes between two Arab tribes come as the UN and African Union prepare to downsize their peacekeeping mission. 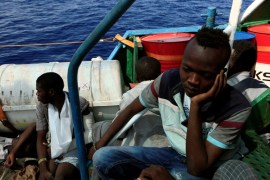 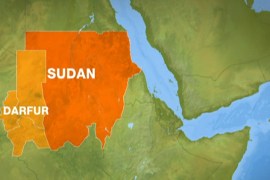