Cox’s Bazar, Bangladesh – A recently arrived Rohingya couple stood sobbing in the sudden afternoon downpour outside a booth on the main drag of the Kutupalong registered refugee camp. It was Wednesday, September 27, and that morning, their four-year-old son had disappeared while his mother was washing herself.

The child, who someone had dropped off at this lost and found booth for missing children, sat crying in the covered stall.

Kamal Hossain, who runs the booth that helps reunite Rohingya children with their families, didn’t immediately hand the child over to the couple. He had first to ensure that they were his parents. So Kamal gently coaxed the boy to point out his mother in the crowd of onlookers.

“Tell me who is your mother? Is that your mother?” he asked, pointing at different women.

After an agonising wait for the couple, Kamal was satisfied that the boy had identified his mother with a nod of his head. The woman reached out to hold her son, crying with relief.

“Here you will find so many people and [you] cannot be sure who is good or bad,” Kamal later explained. Part of his work involves cross-checking that children are being reunited with their families and not with “someone else who can sell them or abuse them”.

In this thoroughfare, a dirt road congested with refugees on the move, edged with clinics and schools and a registration centre, Kamal and his simple microphone booth have become a constant presence – and a source of hope for people looking for lost family members in the ever-changing throng.

The most recent round of brutal repression by the Myanmar army – described as ethnic cleansing by the UN – has forced more than half a million ethnic Rohingya to flee to neighbouring Bangladesh.

Soon after the refugees began to arrive in the border area, Kamal found a woman crying outside his office gate in Kutupalong.

Kamal, who works as a security guard for the international aid organisation, Handicap International, learned that the woman’s child had gone missing.

Kamal, himself a Rohingya refugee from Boli Bazar in Myanmar, whose family fled army violence and came to Bangladesh in the 1990s, pondered how he could help.

“I thought for the entire day, what to do, how can I find the child,” recalled the wiry, soft-spoken man with a gentle smile. It had to be something that could penetrate the crowds, he concluded.

Kamal decided to hire a microphone for eight days, paying 3,000 Bangladeshi Taka (about $36) – his monthly salary – figuring that if he announced missing children’s names “people can hear me and they can pass it from person to person”.

Kamal helped to track down the woman’s child. “So I continued it,” he said. “I feel so good when one person is finding another person through [this].” The UNHCR now supports the initiative, and Kamal works at the booth full-time.

He makes announcements about individuals whose families have reported them missing or about unaccompanied minors who have been brought to his booth.

Kamal starts work at around 8:30am and finishes late at night. He says he makes around 40 to 50 announcements a day. He can usually be spotted inside the booth with other volunteers. Outlets for refugees to charge their mobile phones for free (charging stations usually have a fee of about 10 Bangladeshi Taka, around $0.12) were recently installed on the large wooden table the microphone sits on.

On Saturday, Kamal said that more than 1,200 people – mostly mothers – had registered missing family members, while he estimates that about 700 families have been reunited. According to Kamal, many reunited families don’t report back, but those whose family members are still missing tend to return time and again to the booth asking for news.

Kamal, who has three children, the oldest a 12-year-old son, has sheltered three Rohingya girls, aged around 16, 12 and seven, in his family’s home in the camp. People found the two younger girls by the road and the other in a market and brought them to the booth.

“They’re not safe here as they are girls and there are so many men – anything can happen to them, that’s why I took them along with me,” he said.

He would announce their names in his daily broadcasts; two have since been reunited with their families, one through the announcements.

In this refugee crisis, where more than half a million Rohingya have arrived in Bangladesh since August 25 and more continue to come, Kamal says the wealthy are able to help with money and aid. “I’m poor. I don’t have this chance. I can do only this thing,” he said, referring to the announcements.

Still, Kamal has made a intangible difference to many people’s lives by reuniting families. As a refugee who has lived in Bangladesh for years, we wanted his unique, personal perspective on what his fellow Rohingya are enduring.

Al Jazeera provided Kamal with an instant camera and asked him to photograph what he believes people need to see. This is what he came back with: 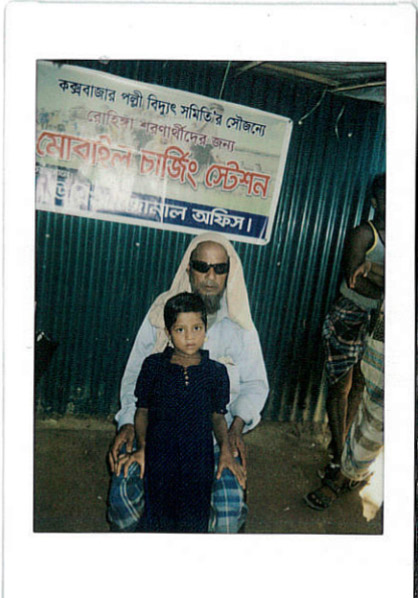 Two days after he started the microphone announcements, Kamal said his friend found the girl pictured above and brought her to his booth.

The child, who is about seven years old, had become separated from her family two days after they arrived in Bangladesh.

Kamal sheltered her in his family home. He put her picture up on his Facebook page along with his mobile number and said the girl’s uncle, who lives in Malaysia, found the post and contacted her father. On Saturday, the girl’s father came to collect her.

When they were reunited “they started crying,” he said. Kamal said he photographed them near the booth. 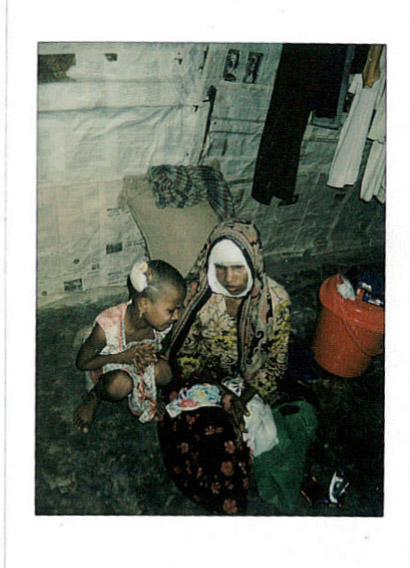 For Kamal, this is the most important picture that he took. It depicts, he said, the reality of what is happening in Myanmar and the nature of the violence being inflicted upon the Rohingya.

“[The] Myanmar army killed her husband and another child in front of her. They were four in the family. Her husband and son were killed,” Kamal said, adding that the girl was stabbed and the woman was raped.

“While leaving, they burned the house down with mother and daughter inside,” he said. The woman was severely burned.

“If people see this picture, they will know the real scenario here, and they will come and work for them. [They’ll see] that they need support,” Kamal reflected.

The mother and child in the picture are now staying with a family in the Kutupalong registered refugee camp. 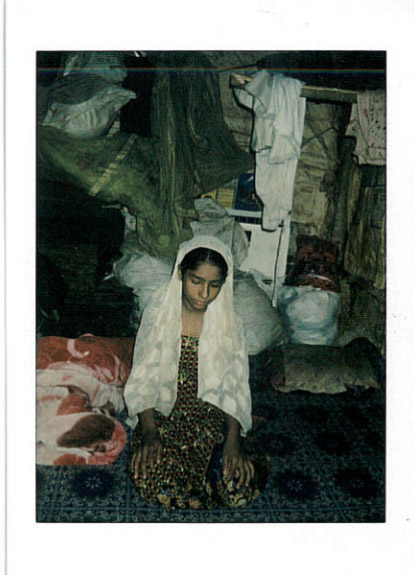 This is Rohima, who Kamal said is about 16 years old and comes from a village in Maungdaw township in Myanmar.

“She was with her family. She was crossing the border and then she lost her parents and as she doesn’t know anything about Bangladesh – where to go, what to do – she followed some refugees and just came here,” he said.

Rohima turned up at his booth and asked him to make an announcement for her.

“I don’t have any power to mic anywhere else. I can only mic here,” he said. “It’s almost around 20 days that this girl is at my house and I haven’t found her parents.”

Kamal said he announces her case every hour and wishes he could spread the news that she is looking for her parents so that she might find them.

He said she has become like a daughter and has bonded with his wife, but said it would be difficult to accommodate her indefinitely. 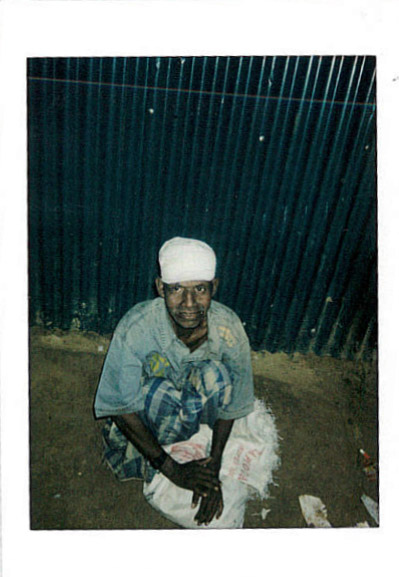 The man in the photograph was injured in a road accident while he was collecting aid soon after he arrived in Bangladesh, Kamal said.

Kamal is critical of those distributing aid by the side of the road.

The man sustained a head injury from the accident and “is roaming around”. Kamal said he found him in Balukhali camp and on Saturday he was in front of his booth.

“He can speak. If he says 10 sentences, maybe two are correct,” he said.

This picture is important, he believes, “because the people [who] are providing aid beside the road, they need to know this, they need to go to some safer place to provide aid because people are in need of it and they will definitely go there.”