By Kieran Pender and Alice Aedy

Sukhumi, Abkhazia – Omar Shakouj remembers the day his family arrived in Abkhazia, a Georgian-claimed breakaway territory on the Black Sea, as they fled the war in Syria.

It was supposed to be his ancestral homeland – Shakouj’s forebears left the region in the 19th Century – and a warm homecoming in otherwise trying circumstances.

Since breaking away from Georgia in the early 1990s during a bloody conflict, Abkhazia has gained de facto statehood but not international recognition. Independence came at a high cost, with isolation and economic sanctions inhibiting reconstruction and leaving the picturesque territory dotted with war-damaged infrastructure. Recognised by Moscow in 2008 and a few unlikely allies thereafter, Abkhazia has grown increasingly reliant on Russian aid.

When protests in Syria’s Damascus transformed into a country-wide conflagration, Abkhazia acted swiftly to bring ethnically Abkhaz Syrians to safety. While European governments dithered over a response to the crisis, Abkhazia’s foreign ministry flew approximately 500 refugees on two charter flights from Beirut, Lebanon, to a Russian airport near the Abkhazian border.

“I thought it would be like Europe,” says Shakouj.

Instead, surrounded by bullet-ridden buildings and isolated due to his inability to speak Abkhaz or Russian, he felt despair. In fleeing one warzone, Shakouj had ended up in another – a frozen conflict unresolved 25 years later.

The history of Abkhazia has long been one of turmoil. In the early 1800s, Tsar Alexander brought Ottoman-ruled territory on the northern shores of the Black Sea into the Russian Empire. Over the following decades, Muslim Abkhaz and related ethnic groups from across the region were forcibly exiled to the Middle East. The Circassian genocide, as it is labelled by some, is believed to have left almost one million dead.

“Towards the end of the nineteenth century, thousands of Abkhazians had to leave their motherland,” Abkhazia President Raul Khajimba explains. Most settled in modern-day Turkey, Syria and Jordan, forming close-knit communities with the other displaced ethnicities.

“Today, the descendants of those refugees have a constitutional right to return home,” the leader adds.

READ MORE: Where are the Syrian refugees?

Russian control of Abkhazia gained a communist complexion in 1921, and within a decade the territory was subsumed into Soviet Georgia. With its snow-capped peaks, mountain lakes and azure waters, Abkhazia became a famous tourist destination – Stalin had five holiday houses in this “Soviet Riviera“.

But beneath the sun-drenched surface, a campaign of “Georgianisation” saw the titular group persecuted and reduced to a minority. By the fall of the Soviet Union in 1991, just one in five Abkhazians were ethnic Abkhaz.

The August 1992 arrival of Georgian troops in response to a declaration of independence by Abkhazia’s parliament sparked a horrific conflict, and allegations of ethnic cleansing have been levelled against both sides.

By September 1993, Abkhazian militias had driven their Georgian opposition to the traditional Inguri river border – September 30 marked the 24th anniversary of what Abkhazians call Victory Day. In recent years the territory has swung towards Russia’s orbit of influence; the United States currently describes Abkhazia as a “Russian occupied” region.

Munir Kudzhba was one of the first Syrians to arrive in Abkhazia. Standing in a sparse classroom at the state university, writing stylish Arabic script on the blackboard, Kudzhba’s wrinkled face and balding scalp betray his 73 or 74 years (he can’t remember his exact age).

The former communications technician hoped he would be enjoying retirement by now, split between homes in Damascus and the Syrian countryside. Instead, he teaches Arabic to a small collection of students at a campus on the outskirts of Abkhazia’s capital, Sukhumi.

Ethnically Abkhaz and proud of his heritage, Kudzhba had long harboured ambitions of moving to Abkhazia. But after a tumultuous early life – he fled the Golan Heights in his early 20s when Israel occupied the Syrian territory during the 1967 War – and a career with stints in Europe and Russia, Kudzhba believed his time had passed.

“I thought I was too old for a new life,” he tells Al Jazeera. “Then the crisis started.”

As the violence spiralled in 2012, Kudzhba purchased airfares for himself and four family members. They sold their car and flew to Russia – Sukhumi’s airport has been inactive since the war. Although Kudzhba arrived in Abkhazia prior to the official government programme, he still received financial and housing support. A job at the university followed, and the lecturer says he is pleased to be giving back to Abkhazian society.

“Life is getting better,” he says enthusiastically, although admits his pre-existing Russian language skills help. “My wife is less happy, but this is the best we could do – we had to leave Syria.”

Officially, Kudzhba and his compatriots are labelled by Abkhazian officials as “repatriates” rather than “refugees”.

Kudzhba does not see himself as an outsider.

“I meet people on the streets and feel like they are my brothers,” he says as he smiles, gazing out towards Abkhazia’s serene Black Sea shores.

While Kudzhba hopes to visit Syria in the future, he does not envisage ever living there again. “This is my home now.”

READ MORE: Turkey’s Syrian refugees carve out their own opportunities

Sipping tea in the afternoon sunlight, Viacheslav Chirikba – a linguist by profession and Abkhazia’s foreign minister until 2016 – recalls how he and his colleagues plotted to bring Abkhaz Syrians home.

“We have had long-standing ties with the diaspora in Syria,” Chirikba tells Al Jazeera. “During the conflict here, some Syrian volunteers even came to fight. So when the war began in Syria, it was our problem too.”

As the crisis escalated, Chirikba began negotiating with Russia’s embassy in Damascus and the Russian secret service to ensure the Syrians could pass through Sochi Airport en route to Abkhazia.

“Without their support, the operation would not have happened,” he says. Around 500 came in two waves – on a per capita basis, this is broadly equivalent to the number accepted annually by several large European states.

While Chirikba hails the programme a “success story” of which he is “very proud – we rescued people from hardship, even possible death”, it has not been without challenges. The Abkhazian government offered free courses in Russian and Abkhaz, but the language barrier proved insurmountable for some – and hampered job prospects in an already depressed economy.

Local resentment surfaced in certain quarters over the generous financial assistance provided to new arrivals. One Syrian told International Alert in 2014 that “we’re strangers here, and we’re always reminded of it”.

The religious divide also frustrates integration. Abkhazians are overwhelmingly Orthodox Christians, while most of the Syrians practise Islam.

Since gaining de facto independence, Abkhazia has operated the State Committee for Repatriation to entice diaspora home. This has been a deliberate strategy to increase the proportion of ethnic Abkhaz in Abkhazian society, a fractious issue since Soviet-era Georgianisation and the ethnically-charged war.

“It is not only Syrians,” says Foreign Minister Kove, adding that the committee has been partially successful in attracting Abkhaz from Turkey.

The programme to repatriate Syrians was funded and coordinated by the committee.

While she admits that “the number of ethnic Abkhaz in Abkhazia is source of concern”, she says that “at the time the war broke out, we had contact with Abkhaz Syrians and knew they were in a very dire situation.”

She adds that “no one was thinking about our demographic situation”.

A month after arriving in Abkhazia, Omar Shakouj was contemplating his options when an eccentric elderly local entered the lobby of his government-provided temporary accommodation, a hotel in Gudauta.

Addressing the small group of Syrian refugees present, the man explained that he had a work opportunity for one of them. Shakouj was the first out of his seat.

Jobs in fishing, wine-making, construction and hospitality followed. They might not be comparable to his pre-2013 role with the Syrian Arab Red Crescent, but Shakouj has acquired Russian fluency and a taste for the local brandy, chacha.

Shakouj eventually moved to Sukhumi and was given a house by the Abkhazian authorities. He laughs as he explains that he has not paid rent in four years.

Sporting a short haircut and stubble on his face, the charismatic Shakouj holds courts over a meal at his favourite restaurant along Sukhumi’s charming seaside promenade. He misses his former life in Syria – “before the war everything was great” – and expresses mixed opinions about the ongoing conflict.

“It is not just the government to blame,” he says in a fast-talking, hand-waving manner.

“I do not care whether the people are right or the government are right – war is bad.” Shakouj left before “it got really bad –  before the rise of ISIL”, and avoids reading news updates from his former home. “I would not return,” he says with certainty.

Not all of the refugees feel the same. Around 200 are reported to have already left, either back to Syria or joining the exodus to Europe. Shakouj’s grandfather returned to Damascus for health reasons, believing that even in war-torn Syria the medical facilities were better than in Abkhazia.

Shakouj remains undecided about his future. He wants to pursue further study away from Sukhumi, but is hesitant to start over again. For now, such dilemmas can wait, he says.

Shakouj recently became engaged to a fellow Syrian, Lara Abdallah, who he met in Abkhazia. The two are now planning their wedding.

A crumbling, frozen conflict zone wedged between Russia and Georgia, Abkhazia is a world away from the cosmopolitan Europe of Shakouj’s dreams. Nonetheless, whether he stays in his ancestral homeland or follows the well-worn path to Western Europe, Shakouj appreciates the generous hospitality of his new compatriots.

“For a tiny nation with no resources to bring us here, give us citizenship and treat us as locals, not refugees,” he reflects, “I am incredibly grateful.” 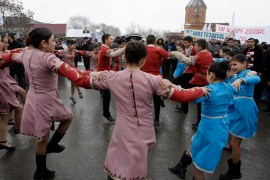 Many of the estimated 100,000 Armenians in Syria sided with President Assad, and are often targeted as a result. 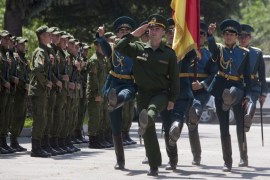 Russian president seeks to incorporate some military units of the breakaway region into the Russian army.