Salfit, occupied West Bank – Jamal Hammad remembers when the al-Matwa spring in Salfit city was a popular destination for locals. Several decades ago, the area would often be crowded with Palestinians hiking in the valley and families picnicking alongside the clear, flowing stream.

Now, however, the sewage flowing through the spring, the rancid smell that engulfs the valley and the mosquitoes swarming the area have left the valley largely deserted.

“All of this waste is coming from Israel’s settlements; mostly from the Ariel settlement,” Hammad told Al Jazeera on his modest farm adjacent to the spring. “We are very worried about what long-term effects this pollution will have on our future.”

The issue of waste management has been ongoing for decades in the occupied West Bank. Last year, some 83 million cubic metres of wastewater flowed throughout the occupied West Bank, of which approximately 19 million cubic meters originated from Israeli settlements built on Palestinian territory in violation of international law, according to the Knesset Research Institute.

Alon Cohen-Lifshitz, a researcher for the Israeli NGO Bimkom, tells Al Jazeera that many Israeli settlements do not have proper waste treatment facilities. About 12 percent of settlement sewage remains untreated and travels down into streams near Palestinian communities.

“This is caused by the fact that Israel declared uncultivated land in the West Bank, which is usually on the hilltops, as ‘state land,'” during the Israeli military takeover of the territory in 1967, Lifshitz explained. “Taking over the hilltops also made it so Israel could easily control the area.”

These areas are where Israeli settlements were subsequently constructed.

Palestinian communities are severely affected by settler-produced waste owing to many of their villages having been forced to move to lower agricultural lands after Israel’s occupation of the Palestinian territory. Therefore, “the sewage issue is a side effect of Israel’s matrix of control in the West Bank,” Lifshitz added.

In the case of Salfit, treatment plants in Ariel – one of Israel’s largest settlements in the West Bank with a population close to 19,000 – Ariel West, and the Barkan settlements routinely break down or overflow, causing raw sewage to flood into the al-Matwa valley and spring, exacerbating already existing waste issues in Palestinian communities.

The Salfit local council has been forced to build four-metre high walls along the al-Matwa spring to protect the city’s central water-pumping station from being flooded by the wastewater, according to a report by B’Tselem.

Up until a few years ago, local Palestinian waste from Salfit city had also contributed to the pollution in the spring. However, the Salfit municipality has since constructed an underground sewage system to transport local waste from the area, releasing it further down the valley.

Palestinians in Salfit have been attempting to establish a waste treatment facility for years; but, like scores of other Palestinian communities, they have been prevented from doing so by Israeli restrictions on Palestinian development in the majority of the West Bank.

‘The smell keeps us awake at night’

“I remember we used to be able to farm in this area, without even using pesticides,” Hammad told Al Jazeera, as he looked down at streams of liquid faeces floating in the water. “Now if we don’t use pesticides to ward off the bugs and mosquitoes in the area, our crops won’t survive.”

Even after using pesticides on the crops, Hammad says that both the quality and quantity of his fruits and vegetables have decreased since the sewage began affecting the farms. Many Palestinians have also stopped eating local produce, in fear that it has been contaminated by wastewater.

Across the street from Hammad’s farm, local resident Hammad Azazma sits on a blanket outside a makeshift structure in his small Bedouin community, located right beside the al-Matwa spring. He tells Al Jazeera that some 50 to 60 of his sheep die each year from drinking the polluted water.

“My children often become sick. They suffer from fevers and develop skin rashes. Even if you don’t drink the water, the bacteria still gets dragged around the area from your shoes or the bugs,” he said.

“And the smell!” he bellowed, wincing his face in disgust. “It keeps us awake at night.”

B’Tselem’s report noted that the pollution had caused the local extinction of several species that had once inhabited the area, including deer, rabbits, and foxes. Boars are now the only animals left alive there, according to the group.

Both Hammad and Azazma expressed fear for what the long-term effects could be on the communities and land. “But no one cares about us,” Hammad told Al Jazeera, shaking his head in frustration. “This situation will become worse and worse, and no one knows what will happen to the residents here.”

Israeli settlers, however, have largely been unaffected by the pollution for the past several decades, since all settlements are connected to Israel’s water supply, and untreated waste is typically diverted down to Palestinian communities.

‘We never get used to the smell of chemicals’

Since the 1980s, the Bedouin village of Wadi Abu Hindi, located in a valley squeezed between Israel’s Maale Adumim and Qedar settlements near the town of al-Eizariya, east of Jerusalem, has been affected by a massive nearby dumping ground for Israeli rubbish.

The Abu Dis dumpsite was the largest landfill in the occupied West Bank and has wreaked havoc on the lives of neighbouring Bedouin communities in the Jerusalem district for decades.

Some two years ago Israel closed the dumpsite – although Lifshitz noted that it is still periodically used – and poured dirt over the massive mound of rubbish.

Khalil Hammad, a resident of Wadi Abu Hindi, tells Al Jazeera the Bedouin there have continued to face the same issues, albeit to a lesser degree, and that the dumpsite has made the residents’ lives miserable.

He says that up until a few years ago the village was covered in plastic bags, and some 200 sheep would die each year from choking on the bags or drinking water from the liquid waste pool.

“The worst issue remains the constant smell of chemicals. It’s all day long, and we never get used to it,” he said, adding that at night the residents can sometimes see fire near the landfill from the large concentration of methane exuding from the waste pool.

Khalil himself has been treated for respiratory illnesses a number of times owing to the pollution.

According to Lifshitz, Israel’s closure of the dumpsite had little to do with the severe health and environmental impacts on neighbouring Palestinian communities but instead was motivated by a wish to advance a highly controversial forced relocation plan for Bedouin communities.

‘We won’t be displaced again’

“The main reason they closed the dump site was so they could transfer the Bedouin there,” Lifshitz said bluntly. Israel has targeted the Jahalin Bedouin tribe – who became refugees for the first time during the establishment of Israel in 1948 – residing near Maale Adumim for forcible transfer, as their presence impedes the planned expansion of the mega-settlement.

The Bedouin in the nearby al-Jabel village were forcibly relocated near the dumpsite after Israel demolished their homes and evicted them from a rural area near Maale Adumim in the 1990s, during an earlier expansion of the settlement.

According to Lifshitz, Israel now has a new plan for the community, who once again have found themselves in the way of Israel’s relentless settlement expansions: forcibly transfer their population to the Abu Dis dumpsite. The relocation plan is expected to affect some 20 Bedouin communities.

Lifshitz, reading from a Hebrew-language document, tells Al Jazeera that as recently as May this year, an official Israeli committee discussed ways of rehabilitating the area to prepare for the population transfers. The most feasible plan for the committee was spreading the rubbish towards the other side of the valley to level out the rubbish and land.

Khalil says that the Wadi Abu Hindi community has also been approached by Israel’s civil administration about moving residents to the dumpsite. “They tell us they will dump more dirt on the rubbish, and that it would be a nice place for us to live in the future,” he said incredulously.

In addition to the landfill and fears of a forced eviction from Wadi Abu Hindi, the residents also have to contend with Israelis from the Qedar settlement releasing their pool water into the below valley where the Bedouin reside.

“They do this every few days,” Khalil told Al Jazeera. “We try to prevent our sheep from drinking the water. But we can’t always stop them. The chlorine makes them sick, and sometimes they die from it.” The pool water also destroys grass in the area that the community depends on for grazing their sheep, Khalil added.

According to Khalil, settlers releasing their waste on the community is yet another one of Israel’s tactics to force them out of the area. “But we won’t leave,” he said.

“We were already displaced once, and we won’t be displaced again.” 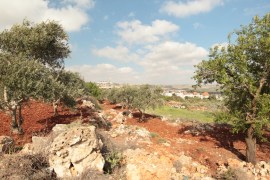 Around 4000 Palestinians live in fear over recent encroachment from Israeli settlements. 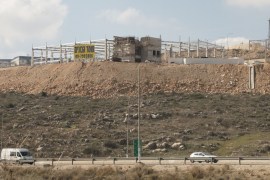 For years, Israel has increasingly taken control of Palestinian lands in Area C to build out its industrial zones.