Activists have renewed their calls to ban child marriage in the southeast Asian nation after it emerged that a man charged with raping a 14-year-old girl was allowed to marry her.

A judge initially dismissed the case after learning of the marriage, but a higher court has since ruled that the man must face trial.

Sharmila Sekaran, the chairperson of Voice of the Children, said there had been a number of cases in the Malaysian states of Sabah and Sarawak where men accused of raping young girls had married their alleged victims.

“It’s not a rare occurrence,” she said. “It’s happening often. We should not have laws that allow 14-year-olds to get married.”

Sharmila said the men often avoided prosecution because rape within marriage is not illegal in Malaysia.

She said there were also cases where men who had allegedly raped young girls had offered the girl’s parents money in exchange for permission to marry their daughters.

Such cases usually happened in poor communities, she said. “Five thousand ringgit ($1,239) seems to be the going price,” Sharmila told Al Jazeera. “Some of these people cannot even afford a bag of rice … 5,000 ringgit is more money than they would think they would ever see at one time in their life.”

Married before the age of 18

In Malaysia, the marrying age is 16 for Muslim girls and 18 for Muslim boys. However, they can marry before if they get permission from their parents and the Shariah courts.

For non-Muslims, the minimum age is 18, but girls as young as 16 can marry if they obtain permission from their state’s chief minister.

READ MORE: ‘Child marriage is real: it almost happened to me’

More than 9,000 child marriages have been recorded in Malaysia in the past five years, according to government statistics published in a local media report earlier this year.

The report quoted Deputy Women, Family and Community Development Minister Azizah Mohd Dun as saying that numbers had decreased in the past three years.

Child marriage remains widespread in many developing countries, according to a 2014 UN Population Fund report [PDF].

The report states that one in every three girls in developing countries is married before the age of 18.

‘The state has an obligation to protect children’

In Malaysia, a Sarawak court last month dismissed charges against a man accused of raping a 14-year-old girl after the judge was told that the pair had married, prosecutor Ahmad Fariz Abdul Hamid told Al Jazeera.

The decision prompted condemnation from rights groups. Last week, a higher court ruled that the case must proceed, Ahmad said. The case will be heard in late September.

The Sarawak Minister for Welfare, Women and Community Wellbeing, Fatimah Abdullah, spoke out after the case was initially dismissed.

“Even if they get married he must still be prosecuted,” she told Al Jazeera. “Our stand is marriage doesn’t nullify the crime.”

The man was charged with statutory rape before the couple married in April this year.

“They got consent from the Shariah judge,” Ahmad said.

Rights advocates say the man should not have been allowed to marry his alleged victim.

“The only reason this guy is being recharged is that there was an outcry,” said Sharmila. “How many other cases are happening?”

She said rights groups had expressed similar outrage in 2013 after a 40-year-old man in Sabah raped a 12-year-old girl and married her after paying her parents a bribe. He was prosecuted and jailed.

Activists want the legal age of marriage raised to 18 for everyone.

Referring to the Sarawak case, Shareena Sheriff, a programme manager at advocacy group, Sisters in Islam, said: “Our view is that the state has an obligation to protect children and this responsibility has been sorely abused.

“Child marriage is actually exacerbating the abuse of the children by making it legal.”

Shareena is concerned that statements by religious leaders and politicians in support of child marriage could make it more acceptable in Malaysian society.

“With those kinds of statements being made publicly, people who want to go down that road will feel that it’s perfectly all right to do so,” she said.

Sharmila believes it is too easy for young people to get permission to marry from the Shariah court and chief ministers.

“What we have been told is that this is just a rubber-stamping exercise,” she said.

The office of the federal Minister for Women, Family and Community Development, Rohani Abdul Karim, did not respond to Al Jazeera’s requests for comment.

However, Fatimah, the Sarawak minister, said the state government was looking into whether the marriage age should be changed. Marriage is a state matter in Malaysia.

She said she personally believes the marriage age should be 18.

Asked whether a man accused of statutory rape should be allowed to marry his alleged victim, she said: “This is something that we need to sit down and decide. The laws cannot be changed overnight.” 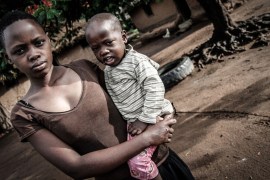 Tales of a child bride: ‘My father sold me for 12 cows’

When she was 12, Grace was abducted and then raped and beaten every day for 11 months. 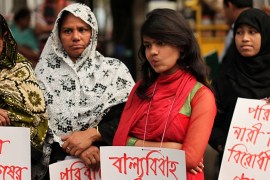