Ostrava, Czech Republic – “To be able to have children is so important for a woman,” says Elena Gorolova. “When they took that away from me, I felt worthless. I completely lost my self-esteem.”

Elena, a 47-year-old social worker, was sterilised against her will as a young woman. She is one of four Czech Roma women, all victims of involuntary sterilisation, who tell their stories in a theatre play called Stories that Have (Never) Begun. The play premiered last month in Ostrava, a city in the Czech Republic with a large Roma community.

The systematic sterilisation of Roma women without their full and informed consent [PDF] – aimed at bringing down their high birth rate – was state policy in the former Czechoslovakia during the communist era. It was officially abolished in 1993 [PDF], but according to the European Roma Rights Centre, it continued throughout the 1990s and 2000s, with the last known case in the Czech Republic taking place in 2007.

For more than 10 years, Elena has been active in a group of Roma women who have put this issue on the political agenda and have successfully fought to stop involuntary sterilisation in the Czech Republic.

They are also demanding financial compensation for what was done to them. “But it’s not only about money. It’s about the recognition that our rights have been violated,” she says.

In 2009, the Czech government expressed its regret over the illegal sterilisations. But last year it rejected a law that proposed compensation for the victims. That’s when Elena and her fellow activists decided they had to find a new way to draw attention to their cause.

READ MORE: ‘I can see now that it was so wrong’

The result is the play, which they set up together with the Czech NGO League of Human Rights and the European Roma Rights Centre.

“The play is another way for these women to express their frustration,” says Katerina Cervena of the League of Human Rights. “It’s a way for them to find an alternative voice.”

As a lawyer she has been working closely with the women for almost eight years now, representing them in court.

The play is based on the life stories of the four Roma women. The stories are told by the women themselves, dressed in black.

‘I am still in pain after all these years’

In a series of scenes in which the women are being interviewed by somebody playing the role of a journalist, they highlight the different ways in which they were coerced into sterilisation.

“I was totally misinformed,” Olga Jonasova says. “A social worker who came to visit me told me it would only be for five years and I would be able to have children afterwards. She said all the other women of the community already had it done.”

“When I was giving birth to my fourth child, they handed me a blank paper to sign,” recounts Natasa Botosova. “I was in a lot of pain, so I just did what they asked. After that I was anaesthetised and then they sterilised me. I only found out what had happened because afterwards there was a scar on my abdomen.”

“I was pressured by a social worker,” says Sona Karolova. “First she promised me money. When I refused, she threatened that they would take my children away. She said my husband would lose his job. In the end I gave in to stop her pressuring me.”

At the end of the play, there is a scene in which Elena explains why she decided to speak out. “I do it because I am not alone,” she says. “I do it because there are other women who are not able to stand up for their rights.”

It’s an emotional moment – there are tears in her eyes. In the audience there are many Roma women; some are visibly touched.

Among them is Jirina Dzurkova. She went through the same experience as the women on the stage. She is a tiny woman of 49, but looks much younger.

“I was 34 when it happened. Not too long after the birth of my son I had an ectopic pregnancy. I was brought to the hospital and they decided to operate on me immediately. They didn’t tell me anything, they didn’t make me sign a paper, there was no talk of sterilisation at all.”

Some time afterwards she went with her son to the doctor for a regular medical check up. The doctor studied her medical file and said: “I see you have been sterilised.”

“At first I didn’t understand what he said, because he used a word I didn’t know. When he explained to me, I was devastated. It was the worst day of my life. It took a long time before I summoned up the courage to tell my husband. We always wanted more children.”

When her husband heard what happened he wanted to go to the hospital to beat up the doctor who sterilised his wife. “I convinced him not to do it, because it would only have meant more trouble. But he was so shocked. After that he started drinking,” Jirina says.

In 2001, she filed a complaint against the hospital, but the case was postponed many times before it was eventually dropped. “It was a terrible blow when that happened. I felt punished for a second time,” she says.

“I am still in pain, after all these years,” she adds. “One day my son said to me: ‘I would like to have a little brother.’ I had to explain to him why this was not possible and we both cried. They stole my dignity. I feel I don’t have the same worth as other women.”

‘I will continue the fight’

Jirina was lucky that her marriage survived. Some victims of forced sterilisation not only lost their fertility but also their husbands. “These men felt betrayed by their wives,” explains Natasa Botosova.

Her husband divorced her after she was sterilised. “He took it very badly. He said: you did this on purpose, so you can cheat on me without any consequences.”

Olga Jonasova’s husband also left her. “After this, I met another man. But we broke up because I couldn’t have any babies. He said he was going abroad for one month, but he never came back. I was lucky to have a big family. They all did their best to comfort me,” she says.

After the performance, Elena sits down in the open-air bar outside the theatre. She is a humorous, energetic woman with big brown eyes. “It happened when I was 21 and gave birth to my second son,” she explains. “My first child was delivered by C-section and the doctor told me I would need another one. Nobody said anything about sterilisation.”

When she was brought to the operation room, she was given a paper to sign, she says. “It was an agreement to sterilisation. But I was in a stressful situation. They were preparing the C-section and I was in pain. I was in such a state that I didn’t know what I was signing.”

After the operation the doctor told her that he had sterilised her. “He told me to be happy. He said that by sterilising me he had saved my life.”

She cried when she heard the news. “I couldn’t believe it was true, that they really had done this to me.”

When she told her husband, they had a fierce argument, because, like Natasa’s husband, he was convinced that she had done it willingly. “It is a custom among Roma families to have many children and he felt ashamed we would never have more than two,” she says. “In the end I managed to convince him that it was done against my will.”

Several years later, in 2004, she met a group of Roma women who, like her, were sterilised against their will. She became their spokesperson. “I no longer felt alone. Fighting together with other women who went through this made me feel much stronger.”

The group organised a demonstration in front of the hospital in Ostrava where many women were sterilised. They also set up meetings with young Roma women to inform them about sterilisation and their rights. Elena spoke three times before the UN Convention on the Elimination of Discrimination Against Women – she delivered her last speech in February this year.

And now there is the play.

She says she felt very insecure when working on it. “I don’t think I have a great talent for acting. It wasn’t easy for me. But now that we’ve had the premiere, all the stress is gone. I think this is a great way to draw attention to our case. I felt so angry when the government rejected the compensation law.”

“They said that a special law is unnecessary, because the women can take their cases to court,” explains Marek Szilvasi of the European Roma Rights Centre, which is supporting the women. “But the problem is that many of their cases are barred, because according to Czech law, the women need to file their complaint within a certain amount of years.”

He says there are no data on the exact number of victims. “But we estimate that several hundreds of women have been sterilised against their will. Among them are also non-Roma women: women with disabilities or with a lower social status.”

“When the government rejected the compensation law, I was so disappointed that I wanted to stop being an activist,” Elena says. “But I won’t. I still have hope that one day we will be compensated for what is done to us. I will continue the fight. For sure.” 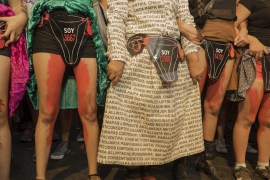 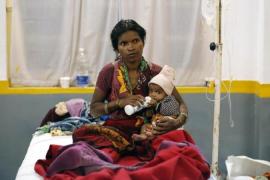