Refugees may lose essential belongings after fleeing their home countries, but they keep valuable knowledge and skills that often become unused due to a lack of opportunities and rights in foreign lands.

As the world faces one of the largest refugee crises in history, a growing number of initiatives are harnessing the talents and cultural heritage of refugees, which have the potential to enrich the lives of others.

Two of the initiatives, which are both based in the US state of New York, are NaTakallam – which means “we speak” in Arabic, and Eat Offbeat.

Food delivery services run rampant in the busy city, but Eat Offbeat stands out because all of its chefs are resettled refugees. Even their manager is a refugee.

But its founders – Lebanese immigrant siblings Manal and Wissam Kahi – point out that the social impact of their start-up was secondary to their main goal; giving locals the opportunity to enjoy “authentic” dishes without having to travel abroad.

“We are not doing this just to help refugees – but to help the refugees bring delightful food to New Yorkers,” they told Al Jazeera.

“People will come to us when they hear about the refugees, but they come back because they love our food.”

Their slogan is: “Where the adventurous eaters find refuge.”

Nidaa Al Janabi from Iraq, Rachana Rimal from Nepal and Mitslal Tedla, an Eritrean, are the chefs who cook traditional dishes from their home countries.

They offer a variety of dishes which you won’t often find at other delivery restaurants.

The Kahis have plans to grow their business by hiring more staff, including an executive chef, as well as expanding outside the US.

“We have received requests to open branches in Chicago, San Francisco, Atlanta, London, Paris and Berlin.”

Meanwhile, NaTakallam hires displaced Syrians in Lebanon, Egypt, Germany, France and the Turkish city of Gaziantep – many of whom struggle to find legitimate jobs – to provide Arabic language lessons focused on the conversational Levantine dialect to people around the world through Skype.

Aline Sara, a Lebanese American who founded the start-up, told Al Jazeera that at a very affordable price of $15 per hour, students can practise speaking Arabic “without paying the ticket to the region”.

Sara explained that she came up with the idea after realising that there was a high demand for affordable lessons in New York, where the cost of a single session at a university or from a private tutor average around $60- $70.

She also said that many students have highlighted the “human experience” when engaging and communicating with the refugees.

NaTakallam works with the Beirut-based NGO Sawa for Development and Aid to connect with refugees in need of job opportunities.

“The refugees, especially those in countries neighbouring Syria – Jordan, Turkey, Lebanon – are stuck in difficult living conditions. They can’t work in their fields of expertise and many of them are highly qualified – doctors, professors, and lawyers,” she said.

“For example we make matches based on interests in politics, the arts, a certain professional field … we pay attention to the individual’s Arabic level, needs, and requests as much as possible.”

Sara sees the initiative as part of a “new wave of social entrepreneurship”, which she described as an “increasingly efficient way of bringing about sustainable social change”.

“We have some Syrians who are making the equivalent of a monthly salary,” she said, adding that one of them is a physically handicapped woman who can work from home and is very popular among students.

“It is great for her and her students love her.”

Sara also said that there have been discussions to possibly expand the initiative to include other Arabic speaking communities – including Iraqis, Palestinians, Yeminis – or to other languages, such as the Persian language Farsi.

“This could be a model that could work for refugee communities around the world,” she said.

“Even if we continue to grow – we will try our best to keep it a personalised experience.” 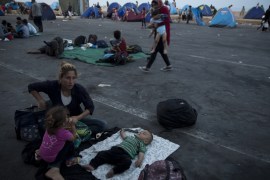 US plans to accept 10,000 Syria refugees in coming year

President tells advisers he wants to let 10,000 Syrian refugees into US in next fiscal year, up from 1,500 this year.