England, UK – When the UK government announced a new law last week that would restrict the freedom of all publicly-funded institutions – such as local councils, universities and the National Health Service – to participate in “inappropriate” political boycotts, it was met with anger.

“It is fundamentally undemocratic to prevent elected local councils making ethical choices about what policies to follow,” Andrew Slaughter, the shadow minister for human rights and a Labour MP for Hammersmith, told Al Jazeera.

But while there are concerns from MPs over the precedent this could set for local decision-making, the largest outcry has come from supporters of the most significant boycott movement in the UK: Boycott, Divestment and Sanctions (BDS), which campaigns for a boycott of Israel until it complies with international law and recognises Palestinian rights.

“Rather than taking steps to hold Israel to account, the UK government is undermining local democracy in order to insulate Israel from growing public opposition,” said Riya Hassan, the Europe campaigns officer for the Palestinian BDS National Committee.

“These measures are about the UK protecting its ally … from being held to account for its violations of international law.”

By outlawing boycott activism against illegal Israeli settlements – the main focus of the BDS movement – Hassan suggests that the ban effectively demands that public bodies treat the settlements as a legitimate extension of Israel.

Parallels have been drawn with the Thatcher government’s approach towards those who lobbied for sanctions on the apartheid-era South African government during the 1980s.

“An obvious comparison [with BDS] is that of the Anti-Apartheid Movement [AAM] in the 1980s,” said Andrew Smith of the Campaign Against Arms Trade.

The AAM was the primary body that advocated for the boycott of South African goods.

“Throughout the 1960s to 1980s, more than 100 local authorities decided to ban South African goods from their offices and schools,” Smith explained. “In 1981, Strathclyde [in Scotland] went one step further by announcing an end to pension fund investments from companies with South African subsidiaries and banning South African sports teams from its playing fields.”

Strathclyde’s local council was soon joined by Cambridge, Newcastle and Glasgow, as well as most inner London boroughs. By 1985, more than 120 local councils had engaged in some form of anti-apartheid protest. Approximately two-thirds of the UK population lived in local authorities that supported the AAM.

“I can’t imagine any sitting ministers suggesting that any of these boycotts were with hindsight wrong or suggesting that they increased community tensions or led to council tax increases,” Smith added.

A message from the Anti-Apartheid Movement

Al Jazeera asked former members of the AAM who were heavily involved with the boycott movement against South Africa from the 1960s until the 1990s what they think of the new law.

Lord Hughes, a British Labour politician and the chairman of the AAM from 1975 until 1995, when it was disbanded, said: “I fully support Israel’s right to exist, despite its deficiencies. Nevertheless, as someone who successfully moved a boycott of South African goods in 1962 when a member of Aberdeen City Council, I fully support the right to use a boycott as a legitimate expression of those who oppose Israel.”

“The AAM used a variety of methods to oppose the apartheid regime, which in the end did lead to its downfall,” he said, adding: “Boycotting was a very effective propaganda tool.”

Suresh Kamath, the vice chairman of the AAM from the mid-1980s until 1994, explained: “Many local authorities, student unions and other public bodies played an important role in the campaign against the human rights abuses of apartheid South Africa. Today, such bodies should also be allowed to express their views on the suppression of the human rights of Palestinians.”

“In my opinion, what this current Conservative government is trying to do is a gross violation of local democracy, similar in intent to what Thatcher’s government did in the 1980s, when they passed legislation to prevent local authorities and other bodies boycotting trade and business with South Africa,” she added, referring to the Local Government Act of 1988.

While this legislation was perhaps better known for Section 28 – which prohibited local councils from promoting homosexuality – the Local Government Act of 1988 also blocked the boycott efforts of local councils, providing an undeniable parallel to the new UK law.

“The Local Government Act was wide-ranging – yes, it’s most controversial section was ‘Section 28’ that prohibited local authorities from ‘teaching of the acceptability of homosexuality’ in schools,” explained Christabel Gurney, a former AAM member who now works for the AAM Archives Committee.

“But the act also had a section on ‘competitive tendering’ that made it compulsory for councils to put out services to tender that were done ‘in-house’. Included in this section was a provision that councils couldn’t include political criteria. For example, [for] companies’ involvement in South Africa, in the criteria they used to award contracts.”

“The AAM – together with our allies in parliament, local authorities, trade unions, etc – campaigned vigorously against the legislation,” Kamath recalled.

“Unfortunately, we did not succeed and the legislation was passed in 1988 … It did prevent more local authorities joining in the boycott campaign.”

Gurney showed Al Jazeera the AAM’s 1987-88 Annual Report to help explain the impact of the 1988 Act on local councils.

“The report outlines the campaign of the AAM and its partner organisation, Local Authorities Against Apartheid, against the 1988 Local Government Act,” she explained, “which had a serious impact on the South African boycott campaign.”

“[Reading the report], you will see that Michael Howard, [the] home secretary at the time, actually received a delegation from the AAM protesting against the act – but ignored their representations.”

“One of the immediate impacts was on the court case that Shell had brought against Lewisham Council to try and stop Lewisham ending its contract with Shell, because of Shell’s involvement in South Africa.”

“Lewisham lost the case,” she added. “It seems history is repeating itself in the sense that the British government is trying to stop elected local authorities [from] taking action to weaken regimes that it supports.”

Under this new legislation, it is possible that these councils will be unable to continue with their boycott resolutions without facing the “severe penalties” that ministers have warned of.

“I worked in local government for over three decades and find [that] the current government’s position is really very disturbing and hypocritical,” said Kamath.

“They talk a lot about localism, yet they prevent local authorities that take a different position from acting as they or their constituents wish. After all, the councillors who make these decisions, are answerable to their local residents, who can vote them out if they disagree with their actions.”

However, Kamath noted that while the Local Government Act had a short-term impact in the late 1980s, the AAM’s aims were ultimately achieved.

“By the time this legislation was passed in 1988 the momentum was with our campaigns,” she explained.

“The membership of and support for the AAM was growing fast, many local authorities had taken action, the consumer boycott was biting – for example millions of people were boycotting South African products, Shell sales were down significantly, and Barclays had withdrawn from South Africa in 1986.”

“By 1988 our campaigning against apartheid was in full swing,” said Hughes. “Mandela was released from prison in February 1990, by which time was it clear that we were winning the battle.”

Is the new UK law just ‘smoke and mirrors’?

The AAM’s success in overcoming the challenges posed by government legislation suggests that the BDS movement may not be entirely stymied by it, and Hugh Lanning, the chairman of the Palestine Solidarity Campaign, remains optimistic.

“In a bid to protect Israel from boycotts, the government is trying to intimidate councils and other public bodies which wish to make ethical procurement and investment decisions,” he said.

“The guidance itself [detailed in a Procurement Policy Note published on Wednesday] is not particularly coherent and there are still opportunities for councils to divest from companies whose business violates Palestinian human rights. The note states that the new guidance is consistent with existing Foreign and Commonwealth Office guidelines on doing business with companies active in the settlements. These existing guidelines warn against such business, citing legal and economic risk and the risk of reputational damage,” Lanning said.

“This undemocratic move by the government will not deter supporters of international law and human rights from campaigning for the end of Israeli occupation,” he added.

Hassan from BDS agreed with Lanning’s interpretation, suggesting that at this stage it is all “smoke and mirrors”.

But, she added: “This government has gone even further in protecting Israel than Margaret Thatcher ever went in defending apartheid in South Africa.”

For now, the BDS movement is hoping that the UK government finds itself on the wrong side of history once again – just as Thatcher’s did during apartheid. 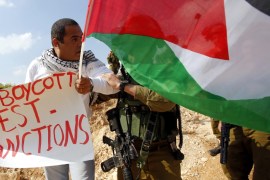 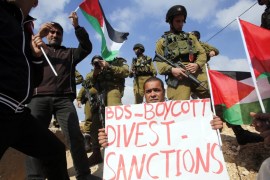