London, England – The British government has been condemned by press freedom groups for seizing an award-winning Syrian journalist’s travel documents upon her arrival at London’s Heathrow airport.

Zaina Erhaim, who works for the Institute for War and Peace Reporting (IWPR), said on Thursday that the move to seize her passport late last month effectively left her unable to travel.

British border officials said they had no choice but to take Erhaim’s passport after they had received a notice that it had been reported stolen by the Syrian government.

The officials told Erhaim that she would have to coordinate with her government to get the passport back.

She was later allowed to enter the UK using a visa on an older valid passport that has no pages left for further visas to be issued, thus barring her from travel.

Erhaim, who is based in Turkey, believes Damascus falsely claimed that her passport was stolen in order to silence her activism and reporting on alleged government violations in its war against opposition fighters.

Attempts to get a new passport through a third party could put that person in danger and, if successful, would only result in it being cancelled by the government again, Erhaim said.

As a result, she said she has no choice but to return to Turkey, where her husband and child live. Her circumstances may leave her no option but to claim asylum in a European country.

“Even my current passport is expiring next year, so what’s next?” Erhaim said.

Erhaim, who won the Reporters Without Borders (RSF) Peter Mackler Award for Courageous and Ethical Journalism in 2015, said she could potentially be forced to ask for refugee status in Turkey, a move that would force her to give up journalism.

At a press briefing held on Thursday to highlight Erhaim’s case, representatives of RSF, IWPR, the Council for Arab British Understanding (CAABU), Index on Censorship, and the Frontline Club denounced the British government for its seizure of the journalist’s only viable travel document.

CAABU’s director, Chris Doyle, said he had discussed with lawyers the possibility of a judicial review into the decision made by the Home Office.

“They have allowed Zaina into Britain. There is no dispute about identity, so they’ve accepted Zaina is who she says she is,” Doyle said.

“At the same time as accepting the (older) passport … they’re then buying into the narrative that the other one is stolen.”

Daniella Peled, the managing editor of IWPR, said Erhaim has made valuable contributions to the reporting of the Syrian civil war, particularly in the training of female journalists.

“It’s not a case of one award-winning journalist writing stories just for herself,” Peled said.

“Zaina has trained more than a hundred citizen journalists and reporters in Syria who are telling the story in IDP camps in Syria and refugee camps outside.

“A part of this has been dozens and dozens of women who had never written in this way before.”

A spokesperson for the British Home Office, which deals with border issues, said its first priority was security and that “it would be irresponsible to ignore warnings about lost or stolen passports.

“The British Government has no direct contact with the Assad regime due to the atrocities it has committed against the Syrian people,” the spokesperson said, adding that the confiscated travel document would not be handed over to Damascus.

The government response was described as a “shame” by RSF’s UK Bureau Director, Rebecca Vincent, for its failure to take into account the risks Erhaim would now encounter when travelling.

“(There was) no response to our request for a meeting to go in with Zaina to discuss her case and ask how they can support her and make sure that she won’t be at risk travelling around with a baby,” Vincent said, adding that other governments could take note of Britain’s acquiescence to the Syrian demand.

“Dictators often seem to have this playbook and take cues from each other when they see someone get away with something somewhere.

“Restricting the ability of critical people to get out, travel freely and tell the world what’s happening in their countries is certainly something important. We should know better here in the UK and our priorities should reflect that.”

Jodie Ginsberg from the Index on Censorship said the tactic of rendering journalists and dissidents effectively stateless was growing increasingly prevalent.

“This is a tool that regimes will look to one another and notice that it’s working and essentially, I think, will be used more and more.” 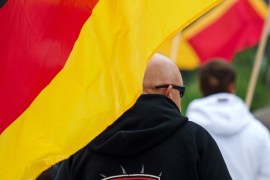 Syrian children, aged five, eight and 11, hit and threatened with a knife in eastern town of Sebnitz, police say.