Ahuisculco, Mexico – Imagine being able to turn on your faucet and enjoy pure mountain spring water. That is exactly what people in the Mexican town of Ahuisculco, little more than an hour’s drive from Guadalajara, have been able to do for generations.

The mountain spring water is a source of pride among its several thousand residents.

The water here is warm, feels soft on the skin and smells well – like nature.

That is a marked difference from the tap water in many of the Mexican cities I’ve been in. In nearby Guerrero State, the water came out of the shower smelling like sewage.

In the warmer months, people in Ahuisculco flock to the mountain spring nestled in a valley below a mountain and swim. The mountain spring is not so much of an anomaly when you consider that it’s near La Primavera Biosphere Reserve.

UNESCO describes the forest area as follows: “It is crucial for maintaining biodiversity and genetic heritage, and promoting the continuity of the evolutionary processes and it constitutes a living laboratory for scientific research and environmental education.”

So when bulldozers rumbled in about four months ago and began scooping up mounds of dirt near the mountain spring, the people of Ahuisculco got worried and suspicious.

And when they couldn’t get any answers about exactly who was digging and what they were doing, they formed an encampment blocking the bulldozers. Construction grounded to a halt.

“We’re going to defend our water. We don’t want our water contaminated and our kids to get sick, for us to be sick or the animals to be sick,” says Sonia Aranda.

Since September, the town’s residents have kept a 24-hour presence at the construction site.

They tell us that their request for information was initially ingored by local government officials. But as the months passed and their determination solidified, bits of information leaked out. The town found out that a company called ARN planned to build molasses containers on the site.

A molasses spill into a lake in their state of Jalisco in 2013 was still fresh in the residents’ minds. It had a disastrous impact on the fish population. The protesters told us that when they complained to local officials, they were told, “It’s not our fault. It’s the previous administration’s fault”.

Tala Secretary General Alberto Ramirez told us that ARN purchased the property in 2013 and began digging without the proper permits, during a transition from one mayor to the next. Ramirez stressed that the company owned the property and officials had to work within the law to stop construction.

But the protesters accused government officials of corruption due to the lack of transparency. They said there was never a public discussion about the company’s project and no environmental studies to ascertain if it would have a negative impact on the surrounding area.

Sandra Valdes, a university professor and member of the non-profit environmental group Primavera Ring, says this is not uncommon. “The biggest problem we have in Mexico is corruption. We can’t fight things easily if we are fighting something we can’t see.”

It seems the town of Ahuisculco may have prevailed in their fight to save their mountain spring water.

The local official we spoke with, Alberto Ramirez, tells us after three months of negotiating, they’ve brokered a deal to appease everyone.

“We wanted to participate in looking for a solution and after three months, we finally convinced the company to agree to move to another place out of the community.”

I asked Ramirez if that spot was far away from the La Primavera Biosphere Reserve and he said yes.

The company wouldn’t answer our requests for a comment. But we did see workers removing construction equipment.

Yet the protestors weren’t leaving just yet. They told us they remain suspicious. Plus, they have another battle ahead.

They want to lobby Mexican federal officials to designate the mountain spring and land around it a protected area. Then it will be off limits to developers forever and generations of people in Ahuisculco can continue to enjoy a luxury most of the world can not – being able to turn on the tap and have fresh mountain spring water flow out. 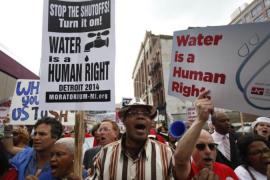 Water is a human right, but who is considered a human being?

Detroit residents face water cuts, which deny them the basic human right of access to water. 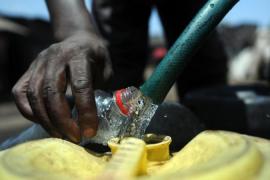