There was no doubt that Tahrir Square in the Iraqi capital, Baghdad, was no longer a venue where Iraqis converged to speak with one voice.

I attended a few protests in recent weeks but this time there were noticeable changes. There were different groups on the ground, each with their own message.

There were those who have been taking to the streets for weeks demanding better services, an end to corruption and to sectarian politics.

These same people had clearly lost hope in the man they believed would bring about the changes he promised.

“(Prime Minister Haider) al-Abadi should leave his Dawa party if he wants to implement reforms,” a woman called Um Ahmed told me. Her words were echoed by others who believe the premier is under political pressure.

The Islamic Dawa party is headed by former prime minister Nouri al-Maliki, who was in power for eight years.

He is accused by many of institutionalising corruption. And many believe he is among a number of powerful politicians behind the scenes preventing Abadi from taking action against corrupt officials

Stronger than the state

The protests emerged from a grass-roots movement but there was always the fear they may be hijacked by political forces that in many ways are stronger than the state.

On Friday there were people who came out in force to present an alternative to Abadi. They carried banners praising the Shia-led militias who are known here as the Popular Mobilization Forces. One read: “They have the support of the people and they have legitimacy.”

The protest movement started because of electricity shortages in the extreme heat. People could no longer cope. It was a spontaneous movement that brought Sunnis and Shias together.

They put behind the history of sectarian warfare in this country and looked forward for a better future.

They then directed their anger at what they called corrupt politicians, asking to reform a political system, which since 2003 has been based on distributing power among sects and ethnic groups, as well as party loyalties.

But now Tahrir Square has become a place where a political power struggle between Iraq’s Shia politicians is being played out.

Abadi, himself a Shia, is facing powerful enemies from within his ruling coalition. He has made it no secret that members of the political elite are fighting back.

“There are people who want to place Iraq in a dark tunnel and bring down the political process. They want to do this to continue to steal the wealth of the country. They have money and they run television and radio stations. But we will pursue reforms,” he said.

Abadi has the backing of the highest Shia religious authority in Iraq, Grand Ayatollah Ali al-Sistani, who has considerable influence over the Shia population. Sistani, through his spokesman even warned that politicians who will be hurt by the reforms won’t give up their power and privileges easily.

Many expected that attempts to reform the sectarian and ethnic power-sharing system would unite powerful forces against Abadi.

“It seriously divided the Shia house. The government and the army are not strong. The armed groups (Shia militias) are exerting pressure. This is very dangerous. Abadi tried to ask Iran to stop those groups and its political backers from meddling in state affairs but it didn’t work,” Wathiq al Hashemi, a political analyst told me. “Also the Dawa party has two wings. One wing supports Abadi and the other supports Maliki”

While the protesters may have first demanded electricity, organisers tell us that what they also want is to regain Iraq’s independence. Protests have not been confined to Baghdad. The mainly Shia cities across southern Iraq have seen demonstrations as well. And some demonstrators particularly in Basra chanted “Iran get out”.

There were a few protesters in Tahrir who were angry at comments made by a former Iranian ambassador to Iraq, Hassan Kazemi Qomi, who said “some embassies whose countries have always supported terrorism in Iraq have played a major role in provoking the popular protests”.

Iran has influential allies in Iraq. And it has given crucial support to Shia militias who are battling ISIL instead of the weak army.

Organisers talk about the support they have from Sistani – a cleric whose authority is not questioned. And they seem confident that the grand ayatollah who never endorsed Iran’s theocratic system of government or what is known as “Wilayat al-Faqih”, will continue to back their cause. Some may argue that just like the powerful Iranian backed politicians, the protest organisers may also exploit a protest movement that began with the simple demand of electricity. Either way, there is a new divide in a country with already so many frontlines.

While the protests may have overcome Iraq’s sectarian divisions, it has divided the majority Shia community
Some Shia political and security factions close to Iran have grown stronger than the state and some call them a shadow government waiting in the wings to step in.

There is a new conflict which could wither away, cause more chaos or change the face of Iraq. 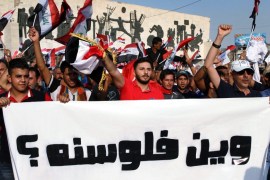 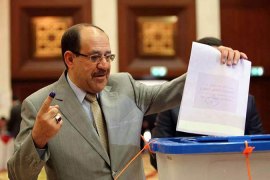 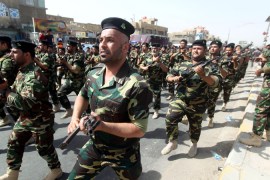