Many Cubans listened to Pope Francis with tears and lumps in their throats as he addressed the pregnant women of the country from the packed Cathedral of Santiago, Cuba.

“I ask you to put both your hands on your bellies, which are carrying hope. If you are sitting here, watching on TV, or listening on the radio, I bless your wombs, and may you have a healthy child.” he said with a broad smile.

In his latest message, dedicated to a need to protect the family, he did not directly mention divorce or abortion, even though Cuba has one of the world’s highest rates of both. This was very much in keeping with his non-confrontational way of touching on a series of thorny issues while on his four-day trip to Communist Cuba.

For example, he praised the grandmothers of Cuba for being instrumental “in keeping the faith alive during difficult times”, a clear reference to the days when Catholic priests were imprisoned, foreign priests and nuns were expelled, and ordinary Cubans pressured to abandon religion entirely. Back in the 1960s, the revolution’s leader, Fidel Castro, declared Cuba an atheist state.

But times have changed, and as promised, current President Raul Castro attended every one of the pope’s masses from a front-row seat. From there, he also heard the pope urge the Cuban people and their leaders not to be afraid of change, and “not to be afraid to stop seeing those who think differently as enemies”.

Cuba is a one-party communist state that does not tolerate organised opposition, and dozens of dissidents were prevented from attending the pope’s open-air masses.

At the same time, the pope’s recurring theme – reconciliation – was directed beyond Cuba’s borders to the United States. The pope played an important role in helping to achieve the historic resumption of diplomatic ties between Havana and Washington.

But the normalisation process, as he points out, is not complete. The US economic embargo against Cuba remains in place after more than 50 years. He will likely continue to use his influence to advance the US-Cuba thaw while he is in the US, but again, very diplomatically.

The pope has called on the Americas to set an example of reconciliation for the rest of the world. “Enmity is destroying a world that is being ravaged by war,” he said.

Francis was the third pope to visit Cuba in 17 years. With each visit, the government has made a gesture to the Catholic Church: With Pope Benedict, Easter Friday was declared a religious holiday. Cubans are now asking themselves what change or concession will this pope’s visit bring?

Will the Cuban government finally grant the local Catholic Church greater access to the state-controlled mass media? Will it allow the church to open a university or a private school? Will it be more tolerant of opposition?

And, will President Raul Castro, who was educated in a Jesuit school, actually return to praying as he indicated he might do after meeting the pope?

A “yes” to any of these questions could well be considered a miracle. 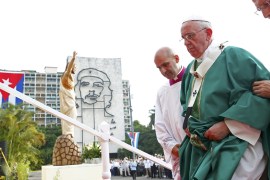 Leader of Catholic Church also met with Fidel Castro at the Cuban revolutionary leader’s home in Havana after the mass. 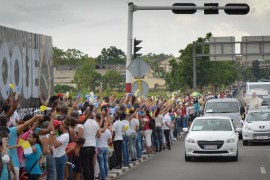 Vatican does not rule out a meeting with dissidents as Francis prepares to lead Mass in Havana’s Revolution Square. 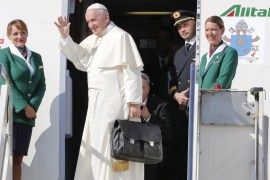