Western Sahara – Nothing but silence surrounds the “Berm” – a sand wall surrounded by millions of land mines. It has isolated the Sahrawi people of Western Sahara for decades and it is barely heard of.

Youth representative Habiboulah Lamin, who like tens of thousands of other Sahrawis was born and raised in nearby refugee camps in southern Algeria, said looking at it makes him feel like “the saddest person in the world”.

“To see this wall in the 21st century and overlooked by the international community, rarely reported about, frustrates me to the bottom of my heart,” said Lamin, his voice breaking.

Squinting his eyes, he looked at the wall 100m away, manned by Moroccan soldiers who were filming the rare journalists filming them.

“My dream is that day when I can cross this wall, like what happened in Germany with the Berlin Wall, and I can meet my relatives who are behind this wall whom I haven’t seen my entire life,” Lamin said.

But spanning 2,700km, the Berm is 12 times the length of the Berlin Wall and four times that of the West Bank wall.

It is second in length only to the Great Wall of China, yet has remained practically invisible to the outside world. An estimated 120,000 Moroccan troops keep busy manning the massive wall.

Unlike other notorious barriers that regularly make headlines, the existence of this “Wall of Shame” has been buried in the desert, along with the 40-year-old plight of the Sahrawis to regain a free Western Sahara, dubbed “Africa’s last colony“.

Hours of driving are required to reach the wall from the Sahrawi refugee camps set deep in an area of the southern Algerian desert known as “The Devil’s Garden”. Daytime temperatures at these camps in the middle of desert regularly reach 50 degrees Celsius.

Morocco built this wall shortly after its forces occupied Western Sahara in 1975.

No sooner had the Sahrawis freed themselves from colonial Spain that troops from neighbouring Mauritania and Morocco marched in to claim Western Sahara.

Mauritania withdrew in 1979, but Morocco kept its occupation of this area, which is the size of Britain, by sending in settlers, digging up the phosphate-rich land, and trawling waters teeming with fish.

The invasion was followed by a 14-year guerrilla war between Morocco and Polisario Front fighters operating out of Algeria. A ceasefire was established in 1991 when the Sahrawis were promised a vote on self-determination.

Morocco has proposed wide autonomy for the disputed territory under its sovereignty, but this is rejected by Polisario, which has campaigned for independence since 1973, and insists on the right of the Sahrawi people to determine their own future in a UN-monitored referendum.

A peacekeeping mission called the United Nations Mission for a Referendum in Western Sahara (MINURSO) was formed. But many say it has failed to live up to its name.

Meanwhile, whereas the political sands have not shifted, the millions of land mines surrounding the Berm have wounded at least 2,500 people.

Only MINURSO peacekeepers can cross the barrier, an act that Lamin said shows them “participating in an occupation process”.

Maria Carrion – director of the FiSahara human rights film festival held each year in Dakhla refugee camp, about 200km southeast of Tindouf in Algeria – organises media visits to expose what she called “an unbelievable act of cowardice”.

“Nobody knows about this wall and it was built with the help of the United States and Israel, who are key players in this region, so we want people to know about it,” Carrion said.

American lawyer Michael Ratner dismissed Morocco’s claim that the wall is to defend against Polisario.

Ratner, who has taken on cases involving Guantanamo detainees versus the US government, Julian Assange, and WikiLeaks, said this is a simple case of “taking someone else’s territory”.

He said Western Sahara’s case is similar to that of the Palestinians as it constitutes “an invasion of a country completely illegally”.

People here have stopped believing that the outside world and a “peaceful resistance” will win it back.

There is particular anger about the UN Security Council’s April decision to extend MINURSO’s mandate for another year without a rights arm.

It’s the only peacekeeping mission in the world without one, despite serious ongoing abuse claims by Sahrawis – 400 “disappeared” people are still missing from the 1970s and ’80s. A Spanish judge, meanwhile, has ruled that 11 Moroccan officials should stand trial for genocide.

Despite lucrative Western Sahara contracts that include taking its sand to enhance Canary Island beaches, analysts say Morocco’s interests are not primarily economic, but date back to 1975, when the kingdom was under threat from the military.

“The risk of losing Western Sahara, let’s say by accepting a referendum for self-determination, is too great for the monarchy to take,” said Issandr el-Amrani, North Africa analyst for the International Crisis Group.

As a stable regional partner and amid rising migration issues and terrorism threats, Morocco is a favoured Western friend, especially for the US and France, with lingering grudges over Cold War and post-colonial conflicts.

Morocco is one of the world’s top 10 spenders on lobbying. It spent $3m in Washington alone in 2013. As a rising economic powerhouse in Africa, Morocco is slowly persuading West African nations to soften their tone on Western Sahara.

Controversies over fishing deals with the European Union, phosphates in Canada and New Zealand, and “conflict tomatoes” in Britain sometimes make a news splash.

But potential offshore oil finds by American and British companies could prompt real debate over whether Morocco can exploit resources in an occupied territory.

Minority owners represented by the Polisario claim they are not party to deals, and are exploited. Sahrawis claim they are blocked from jobs, healthcare, or from even having Sahrawi names.

“If you have a major oil or gas discovery off Western Sahara, this is a real potential game changer as there has not been a major economic stake in Western Sahara that gives you a black-and-white situation,” said Amrani.

Western Sahara’s Foreign Minister Mohamed Ould Salek said the world’s ignorance about or hindrance to its 40-year struggle is eroding the belief in peace.

“The unanimous position of the Sahwari young and older women and men is to go back to war to impose their right, because the UN has lost credibility on this issue. And the mistrust among the nation, especially the young generation, is very big,” Salek said.

“They feel that if they don’t go back to war to impose their right, the international community will not impose on Morocco to accept what has been agreed upon and implement what has been accepted.”

Sidahmed Bulahi, a former Polisario fighter whose weathered face belies his 55 years, laid down his arms only to lose a hand volunteering to clear one of the most land mined areas on Earth.

He doesn’t want “the world to think of the Sahrawis as warriors”, but said the views of the old guard are redundant.

“Our generation has done what it could. If the youth see that we should go back to war for the solution, then they know better than us.”

While Lamin talks of a “day where we turn our emotions into actions”, for many that day has already dawned.

“Most of the young people I know from my generation are capable and ready. We are just waiting from the call from the Polisario,” said 29-year-old Fadili Sidate.

Sidate runs a protest group called Cries Against The Wall. He said he doesn’t believe in peace “as year after year, it doesn’t work”, and condemned the Sahrawi to a slow death on “borrowed land”.

Back at the Berm, Barcelona-based artist Mohamed Yeslem is trying to “fight the most beautiful war” by planting paper flowers with scrawled peace messages from Spanish schoolchildren in a “peace garden”.

Yeslem came across land mines just metres into his mammoth “flower for every mine” project. Many youth protesters have lost limbs just approaching the wall.

“A lot of them could take up arms and with reason. But with art, with culture, our message is: ‘Give life, don’t kill,'” Yeslem said.

With only the sound of fluttering paper flowers filling the empty desert, the hope is this message will break through the wall of silence. 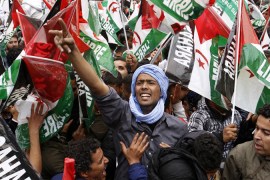 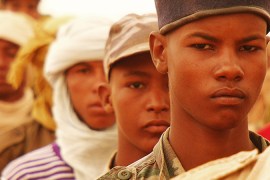 ‘Orphans of the Sahara’ – Behind the name

The filmmaker gives an insight into the Tuareg struggle and shares the story behind the title of the trilogy. 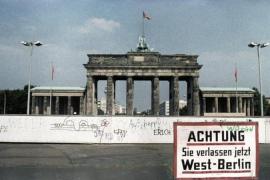 Jan Beyer and Friederike Koppe grew up on opposite sides of a newly unified Germany. 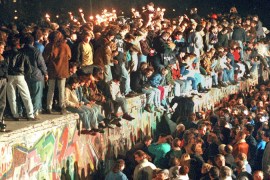 More than one million people set to mark 25th anniversary of fall of Cold War symbol, which is now a major attraction.