Donetsk, Ukraine – One of the most prestigious medical schools in the country has seen a mass exodus after pro-Russian rebels seized control of the area, and many foreign students now fear their degrees won’t be recognised internationally.

“We had up to 2,500 foreign students last year, now there are only 85 of them left,” says Elena Shutskay, a press officer of the Donetsk State Medical University.

The university – which will celebrate its 85th anniversary since its launch in November 1930 – used to be “the best” medical school in “the former Ukraine”, Shutskay says, attracting students from mainly South Asia, the Middle East, Africa, as well as from former Soviet republics.

Now it is under the control of the Donetsk People’s Republic (DPR) – established by pro-Russian rebels in April 2014. Al Jazeera was told by DPR officials to limit its university visit to one hour and ask only “politically correct questions to avoid an awkward situation”.

Since the rebel takeover, Ukrainian language is no longer used in lectures – only Russian and English – and all ties have been severed with Ukraine’s Ministry of Education in Kiev.

The prospect of not being able to obtain a Ukraine-certified medical degree and the danger of the armed conflict forced many students to transfer to other universities in government-controlled parts of the country.

For Kadhem Ali, a 27-year-old Iraqi student, who stayed in Donetsk hoping for a resolution to the conflict, the war is the least of his worries.

“I am used to war and shelling. I am not afraid of it,” he says in Russian.

But the fact that he might end up with a degree issued by DPR is making him worried as he would not be able to practice medicine back home – or anywhere else in the world – since the self-declared republic is not recognised internationally.

Ali came to Ukraine in 2007, escaping the war in Baghdad and hoping for a better future. He took a Russian-language course and finished the first year of his medical studies at Donetsk University, but had to drop out when his father was unable to support him financially any more.

After years of struggling in a foreign land, he resumed his studies only to be told he will not graduate with the Ukrainian degree he came for. Now, he and other foreign students say they hope the university will make arrangements with Russia so Russian degrees will be awarded.

“We, the remaining foreign students of the university, have decided that if by the end of the summer there is no confirmation on what kind of diplomas – Ukrainian or Russian – we are supposed to get, we will all leave Donetsk,” says Safuat Najar, a 26-year-old Palestinian from Hebron, West Bank.

For Najar, an aspiring cardiologist, who is finishing his fourth year of the general medicine course, it will not be an easy move. He has a five-year-old daughter and a local wife, who is working as a doctor in Donetsk.

“Once a shell exploded near our home. We wanted to leave, but it is not that simple,” Najar says, adding he hopes to be able to go home to Hebron with his family for the coming summer holiday.

Holidays are not an option for Shaney Rub, 20, who came from the Indian capital New Delhi two years ago, encouraged by his uncle who graduated from Donetsk State Medical University in 2010.

“I would never be able to afford to study medicine in India,” says Rub. “Here I only pay $3,800 a year for tuition and several hundreds more for accommodation.”

With the rebel takeover, he now struggles to access the money his parents are sending from home.

“There are no open banks left in Donetsk. I have to make a 12-hour bus journey to Kiev to take [it] out of my bank account,” Rub says. On one of his trips, he lost $300 to pickpockets.

His situation is about to get worse as his Ukrainian resident visa expires soon and there is no possibility of getting it renewed in Donetsk, since as it does not consider itself part of Ukraine.

Without the visa, he will not be able to make the trips to the bank in Kiev.

“I will have to stay here for the summer holidays and try to figure out what to do next,” says Rub.

Not everybody is as worried.

“Donetsk is like a home to me. That’s why I have not transferred to any other place,” says John Arthur from Ghana.

The 26-year-old is graduating with a bachelor’s degree in general medicine in July and says he thinks there is nothing to worry about, refusing to follow the news on Ukraine’s conflict and “concentrating on finishing the studies”.

Arthur, who wants to return to Donetsk to specialise in neurosurgery, says he is sure Russia will help out with residency visas and Russian degrees.

Anzor Georgievich Jorjua, deputy rector of the Donetsk State Medical University, agrees that Russia will likely step in, but he is unsure if the unprecedented changes will come soon enough for Arthur and another eight foreign students graduating in July.

“Everything is being done by the university and the authorities for gaining the possibility of granting a Russian degree to the nine foreign students who are graduating this year,” Jorjua says. “If the problem is not resolved in a month, it will definitely be done in the nearest future.”

“There is definitely not going to be a problem for those who have more years to study. The urgency is for the ones who are graduating right now.”

The government in Kiev says there is nothing it can do for those who chose to stay in the eastern conflict zone.

“That’s the risk they chose to take. We helped those who have moved out,” says Aleksandre Kvitashvili, Ukraine’s health minister.

“Those universities [in rebel-held territories] cannot issue anything but papers stamped by the DPR,” he says.

Meanwhile, Najar and other foreign students cling to the hope they will find a way to stay in Donetsk to finish their studies.

“Whatever is happening here does not concern us as we are foreigners. We are not getting involved in any of the politics. We are just studying and going home.” 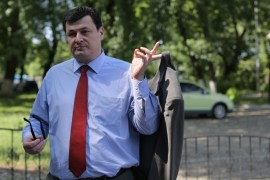 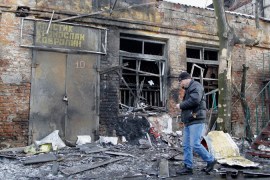 At least 11 people, including civilians, die in fresh fighting even as country faces a “financial crisis”.