On June 16, 2014 – the seventh birthday of his only daughter – Jeremiah Heaton, a farmer in the US state of Virginia, planted a blue flag bearing a golden crown and four stars into the desert sands of northeast Africa.

The Kingdom of North Sudan had been established, he soon declared on Facebook, and he was its monarch.

Earlier that year, Heaton had told his daughter Emily she could become a princess and, not wanting to disappoint her, he began researching the plausibility of his promise.

He soon stumbled across Bir Tawil – 2,060 square kilometres of supposedly unclaimed land on the border between Egypt and Sudan. It wasn’t long before he was on a plane to Cairo, flag in tow.

Heaton had not expected many people to notice his declaration of independence. But his exploits went viral.

Reaction ranged from deadpan – “man plants flag on unclaimed African land so daughter can be its princess”, headlined TIME’s website – to playful: “I guess you could call this a game of thrones,” crowed CNN’s Don Lemon.

Few people, however, appeared to take the claim too seriously. Yet nearly a year on, Heaton – together with an assembled team – is doggedly pursuing his dream.

He has applied to the United Nations for observer entity status and appointed ambassadors in Europe in the hope of gaining recognition there. His kingdom recognised Liberland, another recently self-declared micronation between Croatia and Serbia.

Heaton has reportedly agreed to a deal for Walt Disney Studios and Morgan Spurlock, who produced the show Supersize Me, to make a movie titled The Princess of North Sudan.

Meanwhile, he has formulated wildly ambitious plans for the kingdom: the creation of a state-of-the-art agricultural research centre (ARC) – which he characterises as a modern-day Noah’s Ark – to solve world hunger.

He is compiling a database of more than 1,000 scientists he wants to house there eventually to advance water conservation and agricultural science methods.

On May 12, 2015, Heaton will launch the next stage in his endeavours intended to accelerate his serious intent – an online fundraising campaign aiming to net as much as $45m. He estimates the project will ultimately take at least $2bn to get off the ground.

we’re interested in … improving the world that we live in.”]

“Every dollar that will be made from this campaign will directly benefit the improvements of how we grow food here on Earth.”

“People can take great pride in knowing that they’re part of funding the world’s newest nation,” he added. “And our goals for that nation are to do things differently.”

Heaton is offering a range of incentives for donations: from honorary titles of nobility ($25) and your face on any eventual national currency ($50,000), to naming rights for any future international airport ($1.5m) and capital city ($1.75m).

Other inducements range from the banal – a city street named after you ($1,000) – to the bizarre: “tormenting” Heaton to 48 hours of continuous Justin Bieber music in a public forum in New York City later this year ($2,500).

Heaton said he hopes these early contributions will prove the credibility of the project and attract bigger donors.

“We could’ve sold thousands and thousands of honorary titles of nobility and simply pocketed the money,” Heaton said. “[But] we’re interested in … improving the world that we live in.”

Bir Tawil – which means “deep well” in Arabic – is a slice of land just south of the border between Egypt and Sudan that runs primarily in a straight line along the 22nd parallel. Its fate appears ensnared in that of the nearby Hala’ib Triangle, a larger, more strategic territory by the Red Sea contested by the two countries.

In 1899, British rulers produced a map that gave Bir Tawil to then Anglo-Egyptian Sudan and the Hala’ib Triangle to Egypt. But in 1902, it produced another map with the opposite designations.

If Heaton succeeds in his extravagant plans, it will be thanks to this colonial “cartographic flip-flop”, he said.

Egypt recognises the 1899 map, which gives it the more prised Hala’ib Triangle. Sudan uses the later map giving it the territory. Neither, therefore, appears to want Bir Tawil.

“But that doesn’t mean it’s completely without claim,” said Leshem, who noted tribes also frequent the area. “Its sovereign status is ambiguous but to argue it’s unwanted, that’s a big difference.”

Leshem said he plans to visit Bir Tawil in September as part of a research project, and will be seeking permission from Egyptian authorities – not Jeremiah Heaton. Ironically, Heaton confirmed he himself sought permission from Cairo to make the journey to declare his new kingdom.

Other experts on the region also refute the notion the territory is unclaimed and are sceptical of Heaton’s fledgling project.

“My initial suspicion is that it was a scam or a joke – a kingdom?” said Professor Paul Nugent, a former director of African Studies at the University of Edinburgh.

“But there’s no way either Egypt or Sudan would let it happen.”

The embassies of both Egypt and Sudan in Washington DC acknowledged, but did not respond to, repeated requests for comment.

Heaton said the measures he has taken so far – declaring sovereignty; forging diplomacy – are in accordance with international law and his forthcoming fundraising will facilitate further progress.

“The next step that’s required by law is to occupy the land,” he said. “And we’ve not been able to do that because the conditions that exist in north Sudan are so tough.”

He added he has heard no objections from Egypt or Sudan and believes they will recognise the potential for employment, infrastructure and other regional benefits.

Alex de Waal, a research professor in law and diplomacy at Tufts University and one of the foremost experts on Sudan, said Heaton’s chances are very remote.

“The moment he starts doing anything that looks remotely serious, they would [act],” he said of Cairo and Khartoum.

The academic sat in on meetings between Sudan and breakaway South Sudan in recent years and said negotiators “wouldn’t give an inch – literally”.

“They just didn’t want any hint of making a compromise that might set a precedent for something,” he added.

De Waal also noted distrust between Cairo and Khartoum had grown since Egyptian President Abdel Fattah el-Sisi came to power. A year ago, Egypt held military drills on and across the Sudan border, “which was just a way of sending a signal to Khartoum – don’t mess with us”, he said.

Heaton bristles at such arguments. “That’s where your academics are wrong and they don’t understand the situation,” he said.

If the legal obstacles are overcome, Mother Nature could still prove formidable.

He insists his kingdom wouldn’t put excessive strain on this resource.

But Mark Giordano, director of Science, Technology and International Affairs at Georgetown’s School of Foreign Service, cautioned that any attempts to access treaty-controlled water from the River Nile would be a non-starter with neighbours.

“When you talk about water in the Nile basin, it’s really sensitive,” he said.

Giordano said any water beneath the surface of Bir Tawil would actually almost certainly be fossil groundwater, “which means once you use it, that’s the end of it”.

He also pointed to existing agricultural research complexes that are thriving without the need to create a new country to house them.

CGIAR – formerly the Consultative Group on International Agricultural Research – is a global partnership of organisations engaged in research for a food secure future.

“I don’t see that finding the harshest place on Earth and seeing if you can grow something there is a good way to address hunger,” he added.

“It seems to have all the strikes against it, which may explain why nobody bothered to claim this piece of territory for some time.”

Heaton said he is looking at any and every comparable enterprises for best practice and that his kingdom, free of politics, would be built entirely around the ARC.

“You have to go to the farthest extremes sometimes to develop those answers that you look for,” he said.

Some of Heaton’s critics concede he could progress with scaled-back ambitions.

“If it’s a case of coming and saying I have some resources, I’d like to develop this area in a way that’s consistent with your sovereignty … then they might look on it differently,” said de Waal.

Despite the long odds and seemingly insurmountable challenges, Heaton remains energised and optimistic, darting to Europe last week to meet his volunteer ambassadors.

He compares his endeavours to the efforts of entrepreneur Elon Musk and electric cars.

“Any visionary,” he noted, “is always greeted with scepticism.” 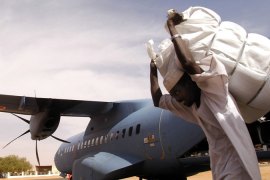 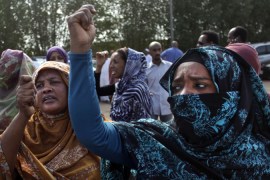 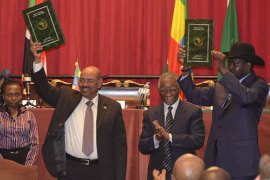 Despite a peace deal signed last September, hostility prevails as the countries amass troops on their shared border.