Borama, Somaliland – From emotionally-traumatised returned migrants, to the chief immigration commissioner to the top smugglers, one thing keeps turning up in conversation: social media.

It keeps the steady flow of would-be migrants coming, they say, enticing young Somalis to risk it all – even death. Facebook, Instagram and Twitter paint the West as a paradise that should be reached by all means, I was told repeatedly.

“Our young people all have Facebook on their phones and the pictures they see on there can only be described as paradise on earth,” Somaliland’s Immigration Commissioner, Mohamed Ali Yusuf, told me in his office in the city of Hargeisa.

The 72-year-old father-of-five, who is not a fan of new technology, had to change his ways. He learned to embrace some “new tricks” in a bid to halt the flow of young people leaving Somali shores every day, destined for Europe via the Sahara desert and the Mediterranean.

In a prime location on his busy desk – next to visa application forms and yet-to-be-issued passports – are three smart phones, including a sleek-looking iPhone.

Despite embracing the newest tools of his trade, he is yet to open a Facebook account himself.

Admitting that it was an uphill battle, he sounded a man almost defeated by the mammoth task.

“My words cannot compete with those images. And that is the unfortunate truth.”

Thanks to the more than two decades of conflict, every Somali has a family member or a friend living in another country. And that tightly-knit community keeps in touch through technology.

With fast internet, and cheap smart phones and tablets, they are constantly in contact – liking and posting comments on each other’s feeds is a new and easy way of communicating across long distances.

And this makes it easier for those involved in the illicit trade of human trafficking.

A smuggler doesn’t need to spend much time convincing potential clients that they should risk their lives crossing an arid desert and an inhospitable sea. That job is done by both Somalis abroad and a diaspora who have returned home.

“We know what Europe looks like because of Facebook. And life here is plain for everyone to see,” Ali Noor Yusuf told me from behind the bars of Borama prison, where he is held accused of being the mastermind of a cartel that has trafficked hundreds of young people into the unknown.

With the internet now in almost every town and village in Somalia, authorities have their work cut out.

As one would-be-migrant told me: “Those pictures give you hope. If we had hope of finding work here we would not leave our country.” 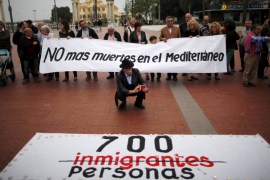 Reports say 38 women and one child were among 228 people transferred to navy boat patrolling area in Mediterranean Sea. 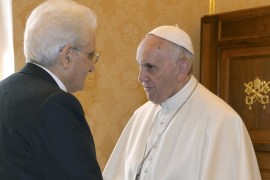 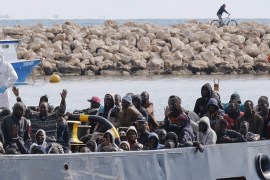 Coast guard says more than 2,100 people in 12 vessels, located between island of Lampedusa and Libya, taken to ports.