London, United Kingdom – Migrants, asylum seekers and social justice campaigners in the UK are joining forces to call for the closure of the country’s notorious immigration detention centres amid concerns for the well-being and dignity of those locked inside.

Several hundred protesters gathered recently outside the Harmondsworth and Colnbrook detention centres, two adjacent facilities on the perimeter of London’s Heathrow Airport, the latest in a series of demonstrations intended to draw attention to a system that critics decry as racist and brutal.

Protesters watched by a small number of police officers carried banners reading “No human is illegal!” and chanted “Detention centres, shut them down!” and “Detainees, freedom now!”, their cries and drumbeats mingling every few minutes with the roar of jet engines as airliners speared into the sky from the nearby runway.

For those inside awaiting removal to countries from which they had fled, the near-constant rumble of flights taking off offered an inescapable reminder of their fate, said Antonia Bright, an activist for Movement for Justice, the campaign group behind the protests.

“You are reminded all the time, but we are here to remind people that there is another way,” Bright told Al Jazeera.

“They are like concentration camps if you are in them. You hear people screaming. You are witnessing people being dragged away to be deported. How do they get away with it? It is because it is a group of people who are repeatedly talked about as if they are nothing. It is a thoroughly racist system.”

The latest protests followed publication last month of a highly critical report by independent monitors into conditions inside Harmondsworth, the largest detention facility in Europe with capacity for more than 600 men. It described how one detainee had sewn up his own mouth in protest at his indefinite incarceration.

“Harmondsworth is in large parts a depressing, dirty place and in some cases has a destructive effect on the welfare of detainees,” the report concluded.

The footage showed detainees living in unhygienic conditions, with drains overflowing, food rotting in the kitchen, bedbugs in their rooms, and pigeons flying around inside the building.

The detainee also filmed a meeting in which a senior manager informed inmates they would be locked in their rooms for an extra two hours a day – from 9pm to 8am – in order to “deliver a better service”, and captured the low morale of staff forced to work longer shifts, with one guard saying: “It’s just gonna break. There’s only so much people can take.”

Since September last year, both Harmondsworth and Colnbrook have been managed by the same contractor, Mitie, which has announced plans to merge the two to create a single facility with capacity for more than 1,000 people. All of the UK’s detention centres are run by private companies that campaigners accuse of putting profits before the welfare of those in their custody.

Harmondsworth gained notoriety earlier in 2014 when an inspection report revealed details of how an 84-year-old Canadian detainee suffering from dementia had been kept in handcuffs as he died, and of how another elderly man who subsequently died had remained handcuffed even while he was sedated and undergoing medical treatment.

The report said the deaths were “among a number of shocking cases where a sense of humanity was lost”.

Hundreds of detainees at Harmondsworth and other centres last year organised sit-in protests and hunger strikes to demonstrate against an asylum and immigration system that they say is rigged against them and denies them basic human rights.

Many of those attending the March 11 protest said they had gone to show solidarity with those inside because of their own experiences of being detained.

Now I know why people are upset with the western world. Now I understand.

Ola, a Nigerian woman, told Al Jazeera she had been sent to a detention centre after the London university at which she had been studying had its licence to sponsor overseas students revoked, leaving her with an invalid visa.

With brothers and sisters already living in the UK and with no close family in Nigeria, she applied instead for a family visa, only to be detained when she attended an interview to discuss her case.

Ola said she had been manhandled by guards, denied medication for migraine headaches, and experienced intimidation and harassment during the 70-day ordeal.

“I am really disappointed in the hypocrisy of this country. I used to trust Britain. I never knew anything about detention centres until last year and they are horrible,” she said.

“I’ve not committed any crime. I’ve brought my own money, my family’s money, to come and study here. We’ve paid thousands of pounds. Now I know why people are upset with the western world. Now I understand.”

Irvine, a Zimbabwean who said he had been detained in 2007 for several weeks while in the process of gaining asylum, said the system was now worse because government restrictions on legal aid had made it harder for asylum seekers to find lawyers to represent them.

“Everything is restricted, there is no freedom. It is a prison. It is inhuman and it is racist. As long as you are black there is a certain way they will see you,” he told Al Jazeera.

Niyon, a Rwandan journalist, said he came to the UK in 2012 because of threats to his life. He said all of his family except his mother had been killed during the 1994 genocide, and he had subsequently been tortured on a number of occasions because of his work.

But he said he had been denied asylum and held for four months, including several weeks in Colnbrook, despite Home Office rules forbidding the detention of torture victims.

“It is hard to come here because I still have many friends inside. They treat people like animals because they know it is the last stop before you are moved to the airport,” he said.

“When I decided to flee my country I thought the United Kingdom was a country where human rights were respected. But the way they treat people is really bad. I don’t know how the media has not exposed this.”

Responding last month to allegations about conditions inside detention centres, the UK’s Home Office said the dignity and welfare of detainees were of utmost importance, adding it expected the “highest levels of integrity and professionalism” from its contractors.

But Karen Bradley, minister for modern slavery and organised crime and a member of parliament for the governing Conservative Party, said: “Detention is an important part of a firm but fair immigration system.”

With the UK set to vote in a general election next month, other politicians have called for the detention system to be reformed, with both the opposition Labour Party and the Liberal Democrats, the junior partners in the coalition government of the past five years, pledging to end indefinite detention.

A parliamentary inquiry also concluded in February that detention was being used disproportionately and recommended that detainees should be held for no longer than 28 days, criticising current practises as “expensive, ineffective and unjust”.

A Mitie spokesperson told Al Jazeera: “We are committed to treating detainees with dignity and respect. Our priorities are safety, security and managing a decent and caring environment and we’re investing considerably on an ongoing basis in creating this environment for detainees.”

During the demonstration earlier this month, protesters marched into a field bordering Colnbrook until they were standing adjacent to an outdoor space on the other side of the razor wire-topped fence from where detainees could be heard joining in the chanting.

“We were shouting with the people outside. We were clapping and shouting ‘Freedom, freedom!’ wrote one anonymous detainee on the Detained Voices blog. “And then the officers come and say they have to come inside otherwise the big security officers would come to force us.”

Detainees elsewhere are also joining in the protests. Women being held at Yarl’s Wood detention centre in central England attempted to block a deportation recently, only to be forcibly moved by guards in riot gear and armed with batons, according to campaigners.

On Monday, a 33-year-old Indian man being held in the centre with his wife and child was reported to have died of a heart attack. Movement for Justice said it planned to demonstrate outside Yarl’s Wood in solidarity with detainees being held there soon. 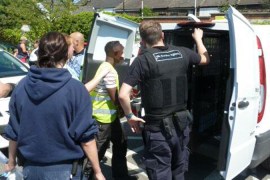 Immigration officials accused of targeting non-whites only in campaign of spot-checks to find illegal workers. 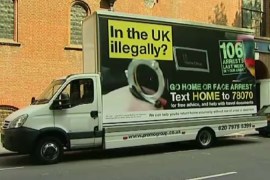 UK immigrants ‘put more in than they take’

Immigrants have made a ‘substantial’ net contribution to public finances, says a report based on government figures.