Reverend Clark Olsen can not remember whether it was a pipe or a baseball bat that cracked fellow pastor Jim Reeb’s head on the night of March 9, 1965. But it made “a sound I will never forget,” he recounts, sitting by the fire in his Asheville, North Carolina home.

Olsen, Reeb and another pastor, Orloff Miller, were on their way to a meeting with Dr Martin Luther King and others in Selma, Alabama when they were viciously attacked by white segregationists. Olsen and Miller survived but Reeb died later, a deeply painful and personal memory for Olsen.

But it is a moment that also changed the course of US history and is one of many unsung stories of courage commemorated this weekend in Selma by US President Barack Obama.

In March, 1965, Dr Martin Luther King issued a call to join him in Selma for a march across the Edmund Pettus bridge. Civil rights activists had selected Alabama to confront a wave of prejudice there led by Governor George Wallace, a notorious bigot determined to preserve segregation between black and white Americans to ensure that the levers of power in the state would stay in white hands forever.

That all changed on March 7, 1965. That day, demonstrators attempted to walk peacefully across the bridge to raise awareness about discriminatory voting rights practices in the South. Police turned on them, attacking them with clubs and running them down on horseback.

In northern California, Olsen, a Unitarian pastor, watched the horrific images unfold on TV. “It just stunned me,” he told Al Jazeera.

The next day, King issued a call to clergy to join him for another attempt to cross the bridge. “The strategy by Dr King,” says Olsen, “was if we get enough ministers there, clergy there, nuns and rabbis, priests, the police are not going to attack”.

Olsen, a white man with a wife and child at home, decided to go. Olsen arrived in the afternoon of March 9. After a brief meeting at a local church, he and the two other Unitarian ministers – Miller and Reeb – decided to go to a local cafe for something to eat.

They had just finished and were headed back to nearby Brown AME Church to attend another meeting.

That is when Olsen noticed a gang of white men approaching very quickly shouting the N-word.

“I was scared,” says Olsen. Attacks by white segregationists were common in Alabama. Reeb and Miller had been trained to drop to their knees and pray if they got in a situation like this.

Miller did just that as the men approached them from behind. Olsen hadn’t been trained and turned to see one of the men raise an object, “a club or a pipe or a baseball bat, I don’t know exactly what it was”. The man took a full swing at Jim Reeb. “I heard the sound of that hitting Jim’s head,” says Olsen.

“And then, I ran.” One man chased Olsen, then struck him in the face, knocking his glasses off. Miller had been kicked while on the ground. Both he and Olsen were deeply shaken but unscathed. Reeb, on the other hand, was badly injured.

“From the moment he was clubbed, he was babbling,” says Olsen. “He was incoherent.”

What they didn’t know at the time was that Reeb was also bleeding internally from a skull fracture. As Olsen knelt beside a dying Reeb, he squeezed his hand trying to help ease the pain.

“I was the last person to be in touch with Jim while he was conscious which is a very meaningful thing for me,” says Olsen.

They managed to get him to relative safety at a local insurance office owned by two prominent civil rights advocates and then to a medical clinic in Selma. What followed was a harrowing night trying to get Reeb medical care after doctors determined he needed to be taken to a hospital in Birmingham, 150 km away.

Olsen and Miller accompanied the injured Reeb in an ambulance but a flat tire, a radio that would not work and a mysterious car full of white men that followed them as they left Selma made the trip nerve-racking and dangerous.

Just seven months earlier, the bodies of three civil rights workers had been dredged up in a Mississippi dam. They had been killed by members of the Ku Klux Klan. “I thought that my body might be in a ditch that night,” he says.

Reeb died from his injuries in a Birmingham hospital, 37 hours after the initial attack. He was 38 years old and left a wife and four children.

His murder attracted national attention and his funeral was televised across the country. Dr King delivered his eulogy. “His death says to us that we must work passionately, unrelentingly,” King preached that day, “to make the American dream a reality, so he did not die in vain”.

Using Reeb’s death as an example of the brutality that existed at the core of Alabama’s racist judicial and political system, thousands of people marched in Los Angeles, Washington, New York, Boston and other cities across the nation.

RELATED: The fight for civil rights in the US, then and now

US President Lyndon Johnson saw an opening. He had been pushing for passage of the Voting Rights Act, which would override any state laws deemed discriminatory by the US government. The fact that a white pastor had been killed shone a light on a very serious problem.

“Reeb’s murder added moral force to the argument that it was time to redress the wrongs of the previous century, since this was really everyone’s problem,” says Allen Fisher, archivist at the Lyndon B Johnson Presidential Library.

Indeed, on March 15, the same day they laid Reeb’s body to rest, Johnson went before Congress and urged them to pass the bill.

“At times, history and fate meet at a single time in a single place to shape a turning point in man’s unending search for freedom,” Johnson told lawmakers. “So it was last week in Selma, Alabama. There, long-suffering men and women peacefully protested the denial of their rights as Americans. Many were brutally assaulted. One good man, a man of God, was killed.”

In August, 1965, with the support of Congress, Johnson signed the Voting Rights Act, one of the most important pieces of legislation during the civil rights era. It opened the door for hundreds of thousands of African Americans to vote and eventually led to the election of the first African American US President.

“I don’t know if I ever got to the point of imagining it,” Olsen says, referring to Obama’s 2008 election to the country’s highest office.

Just days before that historic election, Olsen sent flowers to the Reeb family. Reeb’s daughter, Anne, sent Olsen a thank you note that moved him.

“She felt a calmness in her heart,” Olsen remembers fondly. “She felt acceptance in her heart. She knew that her father would be very pleased, looking down to know that his life had contributed to the election of an African American as President of the United States. It was very touching.”

Three men were acquitted by an all-white jury in Reeb’s murder. Only one of the accused is still alive. Olsen’s never spoken to him. Even 50 years later, at 81 years old, Olsen is still afraid of what would happen if he did. “I realise it’s a somewhat irrational fear but nevertheless it’s with me,” says Olsen.

That has not stopped Olsen from telling his story to schoolchildren, church parishioners and anyone else who will listen. “It is a gift,” he says, tearing up. “It’s a gift to me. It adds meaning to my life. It adds a sense of purpose.”

Dr King and thousands of others crossed the bridge in Selma, and later walked all the way to Montgomery, the state capitol.

Clark Olsen never made it across the bridge in 1965. He did not make it across with the marchers on the 50th anniversary, either.

An estimated 20,000 people showed up in tiny Selma to make the ceremonial journey on Sunday. Warm weather and a march that stretched for more than 1.5 kilometers made the journey next to impossible for Olsen. But rather than be disappointed, the news of the overwhelming numbers nearly brings him to tears.

“We’re no longer outside agitators,” says Olsen after leaving a memorial service at the Brown AME Church where he honoured the memory of Reeb along with his family. “We all clearly represent America and I’m thrilled.” 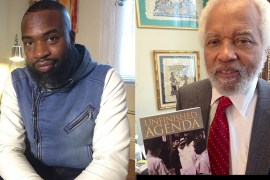 The fight for civil rights in the US, then and now