Khartoum – Sudan will head to the polls in April to elect a president and legislators.

The peak of campaigning is supposed to be now but in the streets of the capital, Khartoum, there are few signs that elections are near.

Some scattered posters have been taped on walls – all promoting the same candidate and his party. That is of course the incumbent president, Omar al-Bashir, of the National Congress Party.

This is different from 2010 when I was last here to cover elections. Like now, the outcome was expected, but there were campaign billboards and posters of candidates other than Bashir, who has ruled the country for 25 years.

One presidential hopeful blamed the lack of campaigning and posters on the absence of funding and the government’s monopoly on advertising on state-owned TV.

The elections will cost us millions of dollars. That money should be invested in the country. We can’t afford this.

“My party can’t afford it,” Fadel al-Sayed Issa Shoeb, from the Truth Federalism party, told me. “So I am driving from state to state to address the people directly to vote for me.”

My colleague Sorin Furcoi and I were one of the first international media teams to arrive in the country ahead of the polls.

Most people we encountered so far have greeted us with the same questions: Why are you here so early? Surely it’s not for the elections?

A few people even told us “there are no elections. It’s just a show.”

And some sarcastically asked “there are elections? Oh, OK, we didn’t know.”

There are 15 candidates contesting the presidential poll. Only six belong to parties – the rest are standing as independent candidates. The majority of the older and well-known parties have chosen to boycott the polls altogether.

The opposition alliance, the National Consensus Forces (NCF), launched a campaign for a poll boycott under the slogan Erhal (Leave).

The elections are taking place at the height of domestic political turmoil as well as unrest in the Darfur and South Kordofan regions.

In a bid to bring the country’s factions together and get them to agree on a roadmap for the country’s future, the African Union has launched a national dialogue initiative.

The political opposition, armed groups and the Sudanese government are taking part in a new national dialogue round this Sunday and Monday in the Ethiopian capital.

But there is little hope among those we met in Khartoum that the talks or the elections will lead to change.

Ali, a 25-year-old tuk-tuk driver, said: ”I don’t care about the elections. I didn’t register so I will not be voting.”

Mohamed, a shopkeeper, told us “the elections will cost us millions of dollars. That money should be invested in the country. We can’t afford this.”

The National Elections Committee (NEC) says the government will stand for the entire cost of the elections, estimated at $30m.

On Facebook, activists are urging people to boycott what they dub “the elections of blood”. Armed groups have threatened of violence to disrupt the process. But Election Commission officials told us that they don’t expect any violence or disruptions.

“The registration process went smoothly despite the threats,” said El Hadi Mohammed Ahmed, the head of the commission’s polling control department. “People have the right to boycott as they have the right to vote.” 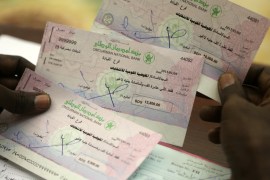 Why is Sudan’s government threatened by talks on post-modernism and Arabic poetry? 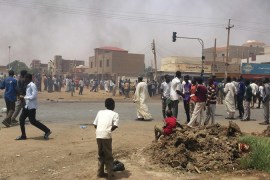