Muslim communities in Denmark are bracing themselves for a backlash of discrimination and hate crime in the aftermath of last weekend’s deadly attacks on a free speech debate and a synagogue in Copenhagen.

Community leaders also warned the country faced a “road into darkness” if politicians allowed anti-Muslim rhetoric stoked by a resurgent far right to undermine fundamental values of tolerance and openness amid a scramble for votes ahead of national elections in September.

Last month’s shootings in Paris provoked a wave of assaults, arson and vandalism targeting mosques and Muslim organisations and individuals in France and elsewhere in Europe, including in Copenhagen where Denmark’s only purpose-built mosque, which opened last year, was graffitied with swastikas.

With a Danish-born gunman of Palestinian descent attacking both an event attended by Lars Vilks, a Swedish cartoonist notorious for caricaturing Prophet Muhammad, and Jewish worshippers, in an apparent imitation of the French attacks on the Charlie Hebdo newspaper and a Jewish supermarket, some fear Denmark’s already marginalised Muslim minority could now face renewed hostility.

“We saw what happened after Paris. We have faced a lot of attacks on Muslim communities for the last 10 or 15 years, but I feel we are facing a very difficult situation in Copenhagen right now and we have to be alert,” Imran Hussain, spokesman for the Network, a Danish human rights campaign group, told Al Jazeera’s “Inside Story“.

Islam and the West?

Danish politicians from across the political spectrum have so far stood united behind Helle Thorning-Schmidt, the Danish prime minister, who said on Monday she believed Denmark would emerge “both more united and stronger” as a consequence of the shootings.

But Imran Shah, spokesman for the Islamic Society of Denmark, urged political leaders to go further in expressing their support for the country’s Muslim population, citing recent speeches made by Angela Merkel, the German chancellor, prompted by a series of mass rallies by the far right “anti-Islamisation” Pegida movement, which has also protested in Copenhagen.

“Angela Merkel said that Islam and Muslims are part and parcel of German society and nobody can separate those two things. That is a strong message to send to the Muslim minorities of Germany, and it is a message that we would like to see repeated within the boundaries of the Danish nation,” Shah told Al Jazeera.

Muslims in Denmark, who constitute about four percent of the country’s 5.5 million population, faced worrying times even prior to the weekend’s attacks. The country has long been associated with the controversial cartoons of Prophet Muhammad published by the Jyllands-Posten newspaper in 2005, which stoked protests across the Muslim world and a number of thwarted plots against the paper and its staff.

The country has been regularly criticised by international organisations for its routine tolerance of anti-Muslim hate speech and marginalisation of immigrant communities. A Council of Europe report on human rights in Denmark published last year deplored “the continuing presence of racist and stigmatising speech against Muslims, or persons perceived as being Muslims, in public debate”.

A poll earlier this month suggested half of Danes wanted to limit the number of Muslims living in the country, while recent opinion polls have pointed to the far-right Danish People’s Party (DF), which topped last year’s European elections with more than one-quarter of the votes, as gaining about one-fifth of votes and significant influence within Denmark’s next government in September’s elections.

Brian Arly Jacobsen, a researcher specialising in Islam in Denmark at the University of Copenhagen, said growing support for the anti-immigration DF since the end of the 1990s had contributed to rising levels of Islamophobia.

“DF has been very efficient at making alliances on the populist right and making people vote for them. They have been very good strategically and politically at articulating all these negative feelings in a way that wins them support,” Jacobsen told Al Jazeera.

Shah called on other politicians to counter the far right by offering a more inclusive vision for Danish society, rather than simply adopting its rhetoric in a “cynical calculation” to gain votes.

“The other road is dark and undermines the fundamental freedoms that Europe was built upon,” he said. “All the bloodshed and tears that Europeans have suffered in building their open and free societies will be shaved away slice by slice if the politicians do not live up to their responsibilities of providing reasonable and fair solutions to the very serious problems that we all face, and not acting in a panicked or paranoid way.”

Mosques and Muslim organisations in Denmark have been quick to speak out in condemnation of the Copenhagen shootings.

Jacobsen said one possible outcome, even amid heightened tensions, could be a greater willingness within the community to play a more active role in Danish society, pointing to widespread support among Muslims for anti-radicalisation schemes, such as the rehabilitation programme for returnees from Syria run by the city of Aarhus.

But Hussain also called on Danes to consider what may have motivated the actions of Omar El-Hussein, the Copenhagen gunman shot dead by police on Sunday morning, pointing to Denmark’s recent involvement in the wars in Iraq and Afghanistan and its staunch support for US foreign policy in the Middle East.

“We should look at what motivates people to carry out these extreme acts, whether that is their mental state, the political situation in the world, or local situations,” he said. “Denmark has been in a state of war for the last 10 years. What has that done to our society? Based on this sad situation we should look at those facts as well. What is it that we are doing around the world and how can it affect us?”

Shah said he remained optimistic that Muslims had a long-term future in Denmark despite current concerns, and emphasised the community’s sense of solidarity with the country’s Jewish minority, with whom he said Muslims had found common cause in opposing Denmark’s outlawing of ritual animal slaughter meat and a proposed ban on circumcision.

“We have expressed our support and sympathy for the Jewish community, and this is not just lip service. We are part and parcel of the same society and nobody can divided us in a time of crisis,” said Shah. 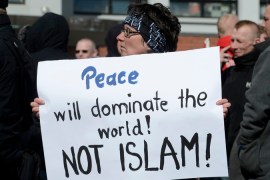 Despite 14-year struggle for a new mosque in the second-largest city, new roadblocks are erected at every turn. 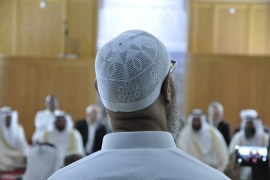 Denmark’s first mosque opened on Thursday, but leading politicians stayed away from the event.